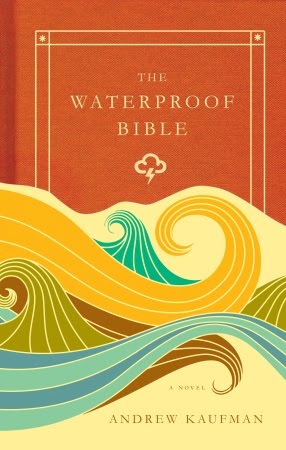 Andrew Kaufman, though born in Ontario, spent most of the 90’s in Halifax, so we’ll claim him as our own. The Waterproof Bible, his second novel, is a slender book of biblical proportions.

Rebecca, from birth, projected her emotions onto others. The doctors and nurses present at her delivery were distressed by her fear and confusion and calmed when she was calmed by her mother’s heartbeat and touch. As she aged she trapped her emotions in objects contained in boxes hidden in a storage unit. Her sisters death precipitates a crisis and she loses her connection with her past. Lewis, the sister’s husband, absents himself from the funeral and travels across the country in a seemingly random fashion. He breathes in the fresh Halifax air, only to turn around and book his next flight. As her further isolates himself, he loses both his sight and vision and must find inventive ways to communicate his needs to others. On the way to the funeral Lewis and Rebecca meet up with a green frogwoman who is barely managing to drive her Honda Civic across country on her own personal quest.

I’m enjoying this book more now upon completion than I did while reading it. It is a strange blend of reality and inventive allegory. Without losing a beat we move from a family, though by no means a typical one, mired in grief, to an aquatic humanoid, green in pallor, frantically driving across county to reclaim her mother. There is drought and there is flood. There is the literal word of the scripture versus a liberal interpretation. And did I mention God? She appears and the job is only part time. This elegant literary novel overflows with emotion and powerful themes that take time to digest.

His first novel All My Friends are Superheroes achieved cult status. Published in 2003 – “All Tom’s friends really are superheroes. There’s the Ear, the Spooner, the Impossible Man. Tom even married a superhero, the Perfectionist. But at their wedding, the Perfectionist was hypnotized (by ex-boyfriend Hypno, of course) to believe that Tom is invisible. Nothing he does can make her see him. Six months later, she’s sure that Tom has abandoned her. So she’s moving to Vancouver. She’ll use her superpower to make Vancouver perfect and leave all the heartbreak in Toronto. With no idea Tom’s beside her, she boards an airplane in Toronto. Tom has until the wheels touch the ground in Vancouver to convince her he’s visible, or he loses her forever.” – publisher

The Unbearable Lightness of Being by Milan Kundera may have some similarities in terms of its lyricism and dreamlike intensity. “A young woman in love with a man torn between his love for her and his incorrigible womanizing; one of his mistresses and her humbly faithful lover — these are the two couples whose story is told in this masterful novel. In a world in which lives are shaped by irrevocable choices and by fortuitous events, a world in which everything occurs but once, existence seems to lose its substance, its weight. Hence, we feel “the unbearable lightness of being” not only as the consequence of our pristine actions but also in the public sphere, and the two inevitably intertwine.” – publisher