Toby’s Room (M) by Pat Barker may be enjoyed by fans of Downton Abbey, but be prepared to leave the drawing room and face the horrors of WWI. Toby’s Room is populated by richly drawn characters and evokes the atmosphere of a country still at war and trying to cope with its wounded. This is an entirely moving story of people coming to terms with loss and injury, however it’s descriptions of deformation, surgery and death are realistic and may not be for the faint of heart.

In 2007 Barker published Life Class (M) which introduced art students Elinor Brooke, Paul Tarrant and Kit Neville. Paul Tarrant comes from a working class background and is intimidated by the other students at the Slade and the bohemians at the Cafe Royal. He develops a relationship with fellow student Elinor Brooke, rivaling for her affection with Kit Neville – privileged and brash. Elinor feels detached from the realities of the war. Paul volunteers with the Red Cross and tells Elinor that she might feel differently about the war if her brother were to be killed. Elinor says that she would not focus on the place of his death, but would return home to paint the landscapes that made him rather than those that destroyed him.

Toby’s Room is both a prequel and a sequel to Life Class, although it certainly stands on its own as well. We meet Elinor as a young girl, hero-worshiping her older brother Toby, perhaps jealous of Toby’s solicitous regard for his mother. One fateful day their relationship takes a inappropriate turn and everything changes for Elinor and we see the beginnings of the cool young woman she is to become. The story progresses in time and we reach the events following Life Class. Paul and Kit have returned from the war, both injured. Paul has a relentlessly painful leg injury, which still allows him to mingle in society, and Kit has a terrible facial injury which isolates him and essentially destroys his life. Elinor’s brother Toby has been reported as missing and presumed dead. When his clothing is returned, Elinor finds a letter from Toby which indicates that Kit Neville knows the circumstances surrounding his death. Despite Kit’s devastating injury, Elinor enlists Paul to uncover this secret.

Readers well versed in this era will recognize and enjoy allusions and references to historical figures. Elinor shares qualities with Dora Carrrington and Paul Tarrant, perhaps to a lesser degree, brings to mind painter Mark Gertler. Toby’s Room is reminiscent of Virginia Woolf’s Jacob’s Room and the death of her brother Thoby. Woolf herself and her sister Vanessa Bell play a cameo role as does hostess Ottoline Morrell. To a greater extent you can read about Harold Gillies and Henry Tonks who played a fascinating role is facial reconstruction surgeries.
Juliet Nicolson has written a few totally engaging social histories from that period including The Great Silence 1918-1920: living in the shadow of the Great War (M).

“… is the story of the pause between 1918 and 1920. A two-minute silence to celebrate those who died was underpinned by a more enduring silence born out of national grief. Those who had danced through settled Edwardian times, now faced a changed world. Some struggled to come to terms with the last four years, while others were anxious to move towards a new future. Change came to women, who were given the vote only five years after Emily Davidson had thrown herself on the ground at Ascot race course, to the poor, determined to tolerate their condition no longer, and to those permanently scarred, mentally and physically, by the conflict. The British Monarchy feared for its survival as monarchies around Europe collapsed and Eric Horne, one time butler to the gentry, found himself working in a way he considered unseemly for a servant of his calibre. Whether it was embraced or rejected, change had arrived as the impact of a tragic war was gradually absorbed. With her trademark focus on daily life, Juliet Nicolson evokes what England was like during this fascinating hinge in history.” publisher 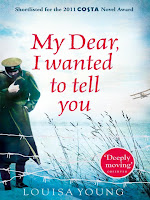 Another novel dealing with the aftermath of the war and its injured soldiers is My Dear I Wanted to Tell You (M) by Louise Young. ” A story that intertwines the lives of two very different couples during World War I follows army soldier Riley as he fights for the love of Nadine despite a terrible injury, and Riley’s commanding officer Peter Locke, who returns home from the war a bitter and scarred man.” Discover