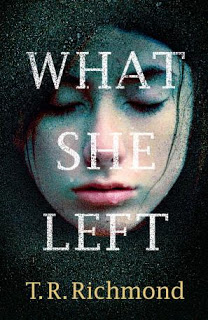 Unlike footprints in the sand which disappear at the first high tide, our digital footprints remain long after we are gone. ..

“What She left” tells the tragic story of the death of twenty-five year old Alice Salmon. The story is told in snippets of emails, Twitter messages, texts, diary entries, and letters (our collective modern memory). Years ago, when someone died all that was left was a few paper records, birth and marriage certificates, photos etc. Now, the internet generation leaves a more prominent mark on our psyche via their digital footprint.

Alice Salmon, a budding journalist, went clubbing with three friends one cold February night and died alone by drowning in the River Dane in Southampton. Her demise went unseen by anyone who would admit to it, and ironically unobserved by close circuit cameras.

Alice was someone I would have liked to have met. Obsessed with truth, quotations, literature, and love. She drank to excess and loved to excess. She suffered from episodes of depression. She was over-analytical, loved Jane Austen, had great empathy for her fellow man, and had a deep affection and respect for the written word.

After her death, the internet generation have the wherewithal to make Alice whoever they want her to be. It all depends on interpretation. Why let the facts get in the way of a good story? In attempting to capture the legacy of her life, even the good stuff they say is tainted by opinion and biased interpretation. Everyone has an opinion. Those who loved her and knew her well. Those who were mere acquaintances but wanted others to think they were more…  With the power fueled by social media, speculation can be interpreted as fact.

One of Alice’s former university professors, Jeremy Cooke spent hundreds of hours trawling through the minutiae of Alice’s life for a book he is writing entitled “What she left”. He considers himself to be the guardian of Alice’s memory and writing a book about her was to be his ‘swansong’. He is terminally ill. He wants Alice to be her own story, so he utilizes our collective modern memory in the writing of his book. He maintains that ‘Love’ is what remains after everything else. It’s what Alice gave out every day and now she’s gone it’s what she left.

An award-winning academic, he is called “Old Cookie” by students and faculty alike. He is viewed by others as pompous, patronizing and superior. His opinion of himself is much different. He uses the moniker ‘Silver Surfer’ when online. He loves two women, his wife Fliss – and Alice’s mother, Elizabeth. Thirty years ago, Elizabeth was a student of his, and they had a brief affair. He and Fliss never had children and since his diagnosis he is now obsessed with recognition and legacy.

Jeremy Cooke has no male friends with the exception of Larry, a pen-friend he’s had since childhood, but never met. He and Larry still correspond, always with utmost truthfulness. Larry is the only person he can really vent with. Now however, Larry has died…

The novel has myriad characters, and we catch glimpses of their relationships with Alice. We wonder, did she slip in an alcohol fueled accident? Did she commit suicide? Or, did one of these fine characters ‘do her in’?

We meet Gavin (Mocksy) a blogger and former housemate who was obsessed with Alice. He stalked Alice and pilfered her possessions. He contacted one of Cooke’s former co-workers and got the dirt on “Cookie”. He then proceeded to spread vicious innuendo via his blog. Gavin’s character leads the reader to believe that Cooke might have murdered her.

Then there is Luke Addison, Alice’s boyfriend. Alice loved him despite an earlier betrayal. If she had lived they would have had a happy life together… Luke is feeling guilty after her death. The police went so far as to arrest him for her murder, then they released him due to lack of evidence. Could he have done it?

We come to know and empathize with her grieving mother, Elizabeth – and her best friend from childhood, Megan. We briefly meet the three friends who were with her the night she died.
We meet Ben Finch, a former boyfriend whom she jilted. Could he have anything to do with her death?

“What she left” is a treatise on modern communication, the fragility of human life and how people handle bereavement. A murder mystery as well as a story about love unrequited and reciprocated. Written with intelligence and empathy, the novel depicts loss in a unique way. T.R. Richmond certainly utilized a different approach in telling this story. However, in this case it was the only way to do it well. I took longer than usual to read this book as I found the epistolary format off-putting and a tad distracting. However, that being said, I find I cannot fault anything else about it. A literary mystery with uniquely divulged red-herrings and twists, “What she left” will appeal to lovers of psychological thrillers and literary fiction alike.

Staff Pick: "What She Left" by T.R. Richmond
https://haligonia.ca/staff-pick-what-she-left-by-tr-richmond-111675/