Originally I picked up this book because it reminded me of another that impressed me a few years ago. Stumbling on Happiness, by Daniel Gilbert, looked at the strange phenomenon among humans to strive for happiness, only to have reality laugh in their faces. The book cited examples from scientific studies, stories in the news, and general history. I loved it for its common language, despite being a book of science. I loved the variety of examples, and how they expressed the many causes of our unhappiness. At no time was a solution given… that is for the reader to discern. 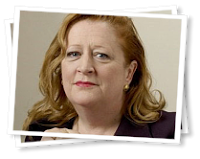 Willful Blindness: why we ignore the obvious at our peril by Margaret Heffernan is a similar title. The claim is fairly simple; we do stupid things despite the fact we know it is stupid. (Heffernen is far more eloquent.)

I enjoy the way she combines disparate examples to examine a subject. Her second chapter focuses on how ‘love is blind’. This is typically a charming adage. We create illusions around those we love, denying their flaws.

But blind love comes in many forms, some very dark. Doctors can’t treat family members because they are too close to the problem. Affairs are ignored by loving spouses because such a betrayal simply couldn’t happen. It gets darker. Child abuse by a family member goes on for years. A church covers-up a sex scandal. And ‘love’ need not be for a person, but perhaps a institution or government…not unlike Albert Speer, Hitler’s architect, who claims he had no idea the holocaust was happening.

We can be blinded by our own limited faculties. She cites the famous ‘Stanford Prison Experiment” (see the disturbing film adaptation ‘Das Experiment’) and a lesser known BP Oil disaster of 2005 (yes, the very same BP Oil that flooded the Gulf) as moments when exhaustion and immersion blinded those involved. 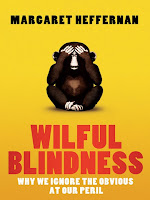 We can be blinded by our convictions. Cult indoctrinations. U.S. Secretary of Defense McNamara and the questionable Vietnam War. Greenspan and the ruined American Economy thanks to his out-moded beliefs.

Speaking of which, we can be blinded by denial…a million-plus bankrupt Americans in 2005, thanks to the ‘Status Quo Trap’. The toxicity of Asbestos suppressed in a mining town…for decades! A drastic rise in Canadian skin cancer patients…which in no way has anything to do with tanning beds, of course!

And though these are all dreadful examples of human error and foolishness, there is a whimsy to Heffernan’s writing. She suffered from her own willful blindness…and yet she continued on, eventually penning this book. She is unapologetic for her own failings and the failings of everyone else listed throughout. And I suppose that is the point; that when we’re blind to the obvious, and it knocks us down, we should at least have the temerity to try and get back up, if not catch ourselves next time!

P.S. and FYI: This is the most recent of her books. For business advice to entrepreneurial women, try The Naked Truth : a working woman’s manifesto on business and what really matters, and How She Does It : how women entrepreneurs are changing the rules of business success.