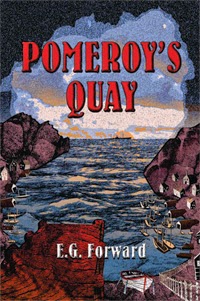 In this historical fiction novel, Pomeroy’s Quay, based on the author’s family’s experiences, World War I is about to break out, and young Richard Pomeroy is growing into adulthood in the town of Brigus in rural Newfoundland.

After his father’s untimely death, Richard has suddenly been thrust into the role of breadwinner for his family. He joins a rough crew bound for the cod fishery off of the wild, dangerous land of Labrador.

Part coming-of-age period piece, part spy thriller, what follows is an exploration of Newfoundland’s culture and history, including the importance of the cod fishery and seal hunt, the superficial prejudices between Catholics and Protestants, the amusing Christmas tradition of mummering, the history of the hardy Newfoundland pony, and the tactical importance of Newfoundland and Labrador in the days leading up to WWI.

In its search for historical realism, the novel doesn’t shy away from showing the often gruesome realities of fishing, where even the slightest mishap could lead to dismemberment or death. Nor does the author censor the vulgarities of the fishermen: they curse, they discuss women, and their jokes are often lewd or macabre. Perhaps the best part is the author’s rendering of the unique Newfoundland accents, enough to give the flavor and cadence of the often darkly humorous dialogue without distracting from the narrative.

While the novel paints a vivid picture of what life was like for the townsfolk and fisherman, at times it presents too much of a general picture by skipping from one narrator to another; the book might have been better served to just stick with young Richard’s perspective. It also loses steam in the chapters told from the perspective of the German U-boat officers doing surveillance, but they certainly lend an air of menace and foreboding to the story, reminding readers of the upcoming war.

The author, E. G. Forward, serves as a commander in the Royal Canadian Navy and did an author reading from this novel at the Alderney Gate Public Library in April 2014.

For a different historical fiction novel about fishing in pre-war Newfoundland, check out The Mystery of the SS Southern Cross: a novel, by Tim B. Rogers. From the publisher: “The date is March 31, 1914. Flushed with the success of a great hunt, the SS Southern Cross is heading back to St. John’s, loaded to the gunwales with seal pelts. Somewhere off Newfoundland’s southeast coast, the ship founders, leaving no clue as to her fate or that of her 173 crew members. The ship simply vanishes, as if whisked off the face of the Earth, the worst disaster ever to befall the sealing industry. The Mystery of the SS Southern Cross is a novel that engages the human story behind this long-standing mystery. It interweaves the crankiness of an old ship, vicious weather, and the passions of men caught up in the frenzies of the time.”

Finally, for a recent non-fiction book on a similar topic, check out The Last of the Ice Hunters: an Oral History of the Newfoundland Seal Hunt, edited by Shannon Ryan. From the publisher: “The Last of the Ice Hunters is a history of the seal hunt, an industry now in decline, but one which provided the few opportunities for employment to Newfoundlanders and Labradorians during the 1930s. Written in the words of the sealers themselves, the book is a compilation of interviews conducted by students who trained under Professor Shannon Ryan of Memorial University of Newfoundland.”