After Leaving Mr Mackenzie by Jean Rhys was one of the books on my Summer Reading Plan. I feel pretty good. It’s October and I managed to read one of my five choices. I wasn’t disappointed. 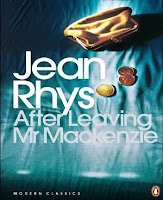 After Leaving Mr Mackenzie addresses what it means to be lost and without those vital connections to others. Julia Martin has only one survival strategy. She enters into relationships with men. She accepts money from them, fooling herself that there is an emotional connection. The man senses her vulnerability and feels responsible for her. Eventually he tires of her and she enters into that desperate in-between phase when she finds herself alone and without resources. Julia is a Blanche Dubois type of character, dependent and vulnerable. Unfortunately for her, youth is no longer on her side. You feel a stab of pity for her when the man notices that she is not as young as he originally thought.

Rhys wrote with a spare directness that reminds me quite a bit of Ernest Hemingway and of Jean Brodie in Muriel Spark’s The Prime of Miss Jean Brodie.

Kate Chopin’s Awakening is another example of a woman struggling against societal limitations. “First published in 1899, this beautiful, brief novel so disturbed critics and the public that it was banished for decades afterward. Now widely read and admired, The Awakening has been hailed as an early vision of woman’s emancipation. This sensuous book tells of a woman’s abandonment of her family, her seduction, and her awakening to desires and passions that threatened to consume her. Originally entitled “A Solitary Soul,” this portrait of twenty-eight-year-old Edna Pontellier is a landmark in American fiction, rooted firmly in the romantic tradition of Herman Melville and Emily Dickinson. Here, a woman in search of self-discovery turns away from convention and society, and toward the primal, from convention and society, and toward the primal, irresistibly attracted to nature and the senses. The Awakening, Kate Chopin’s last novel, has been praised by Edmund Wilson as “beautifully written.” Willa Cather described its style as “exquisite,” “sensitive,” and “iridescent.”” publisher