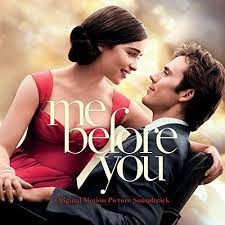 Louisa Clark is a typical English girl in a small town.  A small town she’s never left.  Like many others in the town she’s settled for a local guy.  Hers loves his sports and triathlons more than he loves Louisa.  They have nothing much in common but everyone expects them to marry.  When Louisa loses her job at the local tea shop she knows she has to do something to earn money and get on with her life.  She lives with her parents, her sister, her young nephew, and her granddad.  Like many other close families, they are either minding her business for her or asking her about it.  Louisa answers an ad for a caregiver         at the local castle because she has no other viable prospects.
Will Traynor is a hotshot in business.  He’s young, handsome, successful, and very rich.  He has a beautiful girlfriend.   One day a routine departure from his parking garage ends in a tragic accident.  He is left to spend the rest of his life in a wheelchair.  His family has lots of money but nothing can take away his pain, his depression, and on many days his will to live.
Louisa enters his world and as you might imagine turns it upside down.  She has no patience for Will’s moodiness, his bossiness and she isn’t afraid to tell him.  She’s one of the few people who have stood up to him since the accident.  As these two complicated strangers get to know each other walls begin to break down and both realize how much they’ve come to care about each other.  Louisa wants to make plans and begins to see her life in a whole new light.  For Will there are no long term plans.  He has one plan and that’s the only one that matters.  His family knows about the plan and when Louisa finds out her world is turned upside down once again.
I’m sure that the Hollywood had no way of knowing that the release of Me Before You in theaters in  June would coincide with Canada’s national debate on (spoiler alert!!!!) assisted-suicide.  It’s a fictional story but one that reflects both sides to a very divisive issue.

For those left behind after a loved one opts to end their own life with assistance, it is a long road back to some semblance of normalcy.  Jojo Moyes gives us a look into the aftermath of Will’s choice in After You.  Some of the same endearing characters are back and we meet one special character no-one knew existed.

Staff Picks - Me Before You by JoJo Moyes
https://haligonia.ca/staff-picks-me-before-you-by-jojo-moyes-150584/