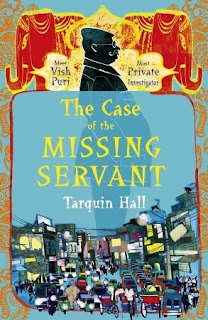 The Case of the Missing Servant: Vish Puri, most private investigator by Tarquin Hall introduces Vish Puri, a most charming detective. Puri ably juggles three pressing cases. A maid servant in the home of a well-to-do Dehli lawyer is murdered. The lawyer is accused of impregnating the girl, known only as Mary, and doing away with her. Puri must use all his skills to determine what happened to this anonymous girl in a city of over twenty million. Puri reveals his astute insight into human nature as he investigates the fiance of a young woman with a protective and very suspicious grandfather. Just to add more challenge to his day, someone is taking potshots at him on the roof of his house as he enjoys his morning tea and bathes his ficus.

The Case of the Missing Servant is a charming addition to the world of international cozy mysteries. In this first installment we are introduced to his team of operatives: Tubelight the safe cracker, a heavy sleeper who is slow to get going in the morning; Flush the computer whiz, who the was first in his village to have a flush toilet; and Facecream, a beautiful woman with the ability to work undercover. Puri named them all and likes, himself, to be called Boss. Thirty pounds overweight, he is more likely, with affection, to be called Chubby. The star of this motley crew is sure to be Mummy-ji. Puri’s mother takes on the problem of Chubby’s would be assassin. In Puri’s opinion women, and especially mummies, do not make good detectives.

India itself is as much as part of the story as Puri, his team and the mysteries they solve. This novel gives you a glimpse into the world of modern Dehli with its crowded streets and poverty amidst twenty first century affluence. It is an affectionate look at Indian food, culture, outlook and eccentricities.

The Case of the Missing Servant would be thoroughly enjoyed by fans of Alexander McCall Smith’s Mma Ramotswe. H.R.F. Keating‘s Inspector Ghote has a fine companion in Vish Puri.

Staff Picks - The Case of the Missing Servant by Tarquin Hall
https://haligonia.ca/staff-picks-the-case-of-the-missing-servant-by-tarquin-hall-10331/