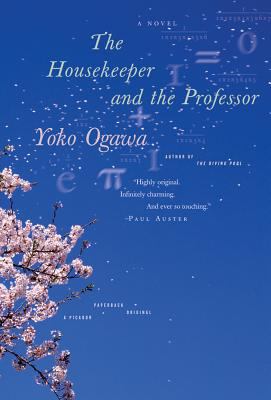 Kristina mentioned this book in an earlier post – New Books You Might Have Missed. However it is so wonderful, we need to talk about it again.

The Housekeeper and the Professor by Yoko Ogawa is about a brilliant mathematics professor who suffered brain damage in a car accident. His memory does not extend beyond 1975 and his short term memory lasts only eighty minutes. Each day he is greeted with a note that reads, “My memory lasts only eighty minutes.” Each day he meets his housekeeper and her son for the first time. The housekeeper is a single mother whose sole occupation has been to earn a living to support her son and herself. She discovers that somewhere along the line she has neglected fun. The Professor and the housekeeper grow closer as she cares for him and he gently teaches her and her son about the beauty of mathematics.

I attended a conference recently where I listened to a presentation about reading. The speaker said that we may all read the same novel, but take out of it what means the most to us and put aside the rest. I became very conscious of this while reading this book. I accept the beauty of mathematics, but honestly, those portions of the book washed over me. For me, the key point was the relationships that developed amongst the three main characters. I was struck by the respectful way they dealt with one another. Each individual, including the child, was deeply conscious of the others feelings and needs. Sweet, but never saccharine.

A movie The Professor’s Beloved Equation was released in 2006. Unfortunately, it no longer seems to be available, but you can see the trailer on YouTube.

If you are inspired by mathematics, see again the titles Kristina suggested in an earlier post. I usually try to think of books that have a similar feel. I have to say, I’m stumped. Is anyone else who read this able to jump in?

Staff Picks - The Housekeeper and the Professor by Yoko Ogawa - a vintage post
https://haligonia.ca/staff-picks-the-housekeeper-and-the-professor-by-yoko-ogawa-a-vintage-post-42874/