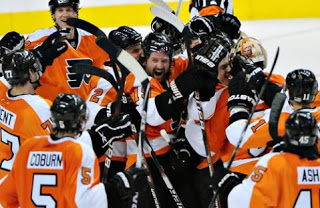 It’s wild to think that just a few weeks ago the season was winding down. The Toronto Maple Leafs were already golfing, Ottawa Senator and Montreal Canadiens fans thought they had a shot at going all the way and the Philadelphia Flyers squeaked into the playoffs by a nose.

Flash forward in true “Lost” fashion and we now sit with a matchup of what a month ago would have been called a ‘David verse Goliath” battle.

Goliath being the powerhouse Chicago Blackhawks who were looking for a solid goaltending all season and have finally found it in young Antti Niemi and the resurgent Broad Street Bullies who have huffed and puffed to get their way to the finals.

In a new twist, here are my 5 keys to the series and then you will find my prediction for this series:

•Goaltending Matchup – Big GIGANTIC surprise Finish flash Antti Niemi goes head to head with even bigger surprise Canadian Michael Lieghton. Niemi sits with a 921 save %, while Lieghton holds a sterling 948. The Canuck also takes the GAA category with a 1.45 versus the Fins 2.33. Throw in the factor that the Philadelphia had three shutouts in the last round and were able to beat the shotblocking kings at their own game last round, I will throw advantage to the Flyers.

•Bridesmaid syndrome – Always the bridesmaid and never the bride? Marian Hossa has been on the losing end of a Stanley Cup series for the last two years seasons and it may just be time for that to change. He has averaged just under 18-minutes of ice time a game but after three rounds has just 2 goals. Two goals?! With 51 shots taken he now holds a 3.9% shooting average. He is also second on the Blackhawks in Penalty minutes with 21 already, and he has shown a lack of composure that is out of character. Another disappointing performance from him in the playoffs will to finish with Hossa wondering the eternal question: Who’s can I jump to next.
•The Buff Factor – Raise your hand if you’re sick of hearing about Dustin Byfuglien. Perfect. Well, get ready to stop seeing his name on the score sheet. The truck of a man has been busy sitting in front of nets all playoffs; getting up close and personal with both Roberto Luongo and Evgeni Nabokov, easily getting the better of both. However, the Flyershave one asset that will help even the battle: Chris Pronger. The defensive talisman of the bullies will be tasked with clearing out the garbage in front of Leighton and make no mistake, he will manhandle the Big
Buff
The Old workhorse – Chris Pronger is getting old and entering the twilight of his career. He has been to the finals of the Stanley Cup three times in recent years and there will only be a few more opportunities for him to win the Holy Grail of hockey. The 35-year-old, 6’6″, 220 pound Canadian defencemen has his eyes set on another ring, so look for him to play like a man possessed and be a key factor in this series.

•Home Ice Advantage – In a series that many think will go seven games, the issue of home ice advantage can be key to lifting the cup. The Flyers have scored 28 goals at home, with just 14 against. On the other hand they scored 26 on the road and allowed 22 against. The Blackhawks 21 at home and allowed 23 against, while scoring a big 32 on the road and allowed just 17 against. What does this mean? Maybe nothing, maybe everything. But if you’re looking at home-ice advantage, the Blackhawks have been outscored at home in these playoffs there and maybe it’s the edge the Flyers need?
So with all that out-of-the-way, it comes down to this: My prediction is…

The Philadelphia Flyers will stun the Chicago Blackhawks in seven games.

Henry Whitfield lives in Halifax and is an avid sports fan who covers everything and anything in the sports world, while focusing on hockey and football. Follow him on twitter @HenryWhitfield.