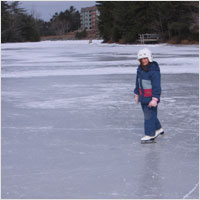 On March 10 at 6:50 p.m. police were called to the Frog Pond on Purcells Cove Road where a caller to police indicated that three children were playing on the ice and it seemed to be breaking up around them.

The temperature over the past few days had been very mild and the ice was not considered safe to be walking on.

Three young teenagers were located sitting on a rock approximately ten feet from the shore line. It was learned that prior to police arrival one boy had fallen into the water waist deep.

All there children were safely removed from the water and two were transported to the IWK Hospital as a precaution.

As a reminder, its important to stay off any ice surfaces. Due to the warm weather the ice is no longer considered safe.