There’s a new gal in town, and she’s looking mighty fine with her pointy teeth, feeble arms, and impressive tail. Her name is Sue and she is a  T-Rex. She is unusually fly. She has been known to eat smaller dinos and one of her brethren has attempted to murder my one true love, J. Goldblum. Rude! 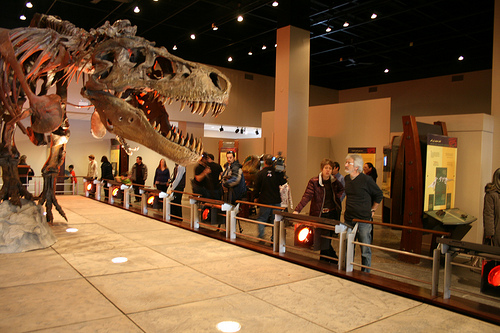 For the next few months she’ll be calling the Museum of Natural History in Halifax home. So. Awesome.

I got to meet Sue this morning and she impressed the wee dinosaur nerd in me. She is the largest, most complete, and best preserved Tyrannosaurus rex fossil yet discovered… and the Museum of Natural History is the first Canadian institution she has ever visited! How about that.

Most of my visit with Sue was spent making idiotic noises (Grr Arrg) and gestures (Look at my tiny forearms and useless claw-like hands!). I bet she gets kind of tired of that stuff, but it’s basically mandatory to act like a weirdo around crazy skeletons.

Sue also had minions scattered about the museum. They ranged from the very small to the very slow… so I don’t think we’ll need to give Sam Neill a call any time soon. Well, maybe just for fun.

Definitely give Sue a visit yourself and serenade her with sweet, sweet songs by Dinosaur Jr or any other dinosaur-themed band. If you have a kid, bring them. They will basically LOSE THEIR MIND with excitement. Sue’s here until May, so there’s plenty of time to arrange a trip.