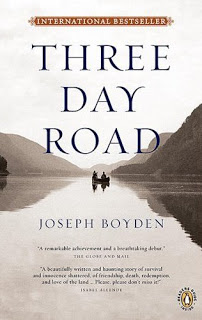 This morning, in a post-dream state, I was thinking about some of the books I’ve read in the past. I took sort of an interesting journey around the world; the following is my weird literary travel.

I’ve just been reading Joseph Boyden’s books, Through Black Spruce and Three Day Road. Like many, I enjoy reading Canadian fiction for the familiarity of place. However, Boyden writes (beautifully) of a Canada with which I am mostly unfamiliar. Both of his novels take place in the North of Canada, a challenging environment which his characters embrace and even crave. The books also reference the residential school system, and the latter refers, obliquely to the Boer
War.

These references led me to The Power of One by Bryce Courtenay because it takes place in South Africa and the little Afrikaner boy, Peekay, goes off to a scary, abusive boarding school. (Loose connection, I know.) It’s a touching and sometimes heartbreaking story about love, God, philosophy, friendship, knowledge, and growing up.

From Jo’Burg, I travelled to a fantastic memoir of growing up in war-torn Zimbabwe, Alexandra Fuller’s Don’t Let’s Go to the Dogs Tonight: An African Childhood. Fuller’s parents were prone to alcoholism, extreme racism, and were dangerously intent on maintaining Zimbabwe (then Rhodesia) as a white-run country. Fuller’s story is funny and tragic at the same time: an excellent account of human and family drama.

I then travelled to Sri Lanka (Ceylon), but came full circle back to a Canadian author, Michael Ondaatje. His own memoir,Running in the Family also discusses alcoholism, and the craziness of family. Ondaatje’s prose is light and lovely, and there is literal magic in his storytelling.(The previous two books also bear striking similarities to Running with Scissors, Augusten Burroughs’ notorious memoir of complete dysfunction.)
I was thinking about what all of these books have in common and the strongest similarity is their settings: yes, they vividly describe characters and relationships, and almost unimaginable situations, but they also convey a real feeling for their respective locales. The cold isolation of the Canadian North; the alternating dusty brown and fresh green ofSouth Africa; the hotly contested farmlands of Zimbabwe; and the spicy heat of Sri Lanka.

This led me to the final stop of my strange book journey, to Sarum: the Novel of England. Edward Rutherfurd’s historical fiction books do a wonderful job of tracing the history of a particular place. In this instance, he begins about 10,000 years ago and traces the changing landscape of England, from a land covered in ice, to the building of Stonehenge, to Roman hot springs, through to the building of a modern day Salisbury.