Even though I am a committedly non-religious man with only the loosest belief in an Einsteinian concept of god there are still things on this magnificent world I would call utterly divine. The list is of course a relatively short one and some of its number I discreetly choose not to list in the public domain. But within its confines are such glorious things as the view from Edinburgh Castle on a warm spring day, the last garlic finger in the box when you’re baked out of your mind, women’s tennis, the original version of the Empire Strikes Back, a finely aged bottle of Highland single malt Scotch (which I am presently drinking out of coffee glass as it is the only clean one) 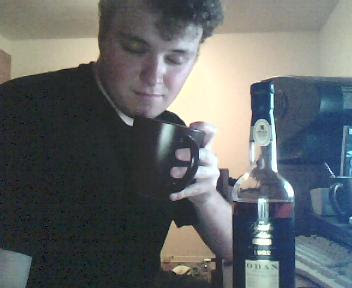 (no I’m not an alcoholic. Yet. I just don’t like sharing an eighty dollar bottle of Scotch with someone unless they can appreciate it), the ruins of Angkor Wat, Zooey Deschanel and a good night in downtown Halifax. Another item on my list is the subject of part nine of my recurring segment The Student Cuisine Guide. Beloved nine I present to you THE CLUB SANDWICH!

God just look at that thing! It makes me want to run out, find a late night diner somewhere in Halifax, order one of these finely toasted puppies and chow down. The Club Sandwich’s recipe is elegantly simple; cheese, mayo, tomato, lettuce, bacon, chicken or turkey on three pieces of finely toasted bread. Served with a some crispy fries, a pickle and some coleslaw and you have yourself one damn fine lunch, dinner or even breakfast. The club sandwich is without a doubt my all time favourite dish which is fortunate because any establishment worth its salt (barring those with menus tied to a specific type of cuisine) will have this on the menu. Though sometimes restaurants try to pass off a club “wrap” in the place of my beloved sandwich. Those people are savages. Filthy, uncultured barbarians who do not belong in civilized society. Most importantly for those on the student financial plan, it is usually one of the cheapest items on the menu and is relatively inexpensive to make at home especially since grocery stores have begun to sell whole roast chickens. With a quick trip to the grocery store, an inexpensive loaf of multi grain bread from a local bakery and a toaster, you can have yourself a damn fine meal. I wish I had some charming story detailing the first time I had a club or the day I fell in love with it. Sadly I don’t, nor can I even hazard a guess about the time period of when I first became a devotee. I just love them and that is all the explanation I need.

Unfortunately being a disciple of the club sandwich eternally dooms one to a never ending Arthurian quest. Whenever I go to a new restaurant, diner or bar I find myself, no matter how enticing the house specials are, getting the club. It is like I have to test every place, every chef on the off chance that I will find myself biting into the best damn club sandwich I have ever tasted. This has lead me to many disappointments and dead ends. Though the recipe appears simple, there are numerous ways of making a club. Sometimes you’ll be presented with a cold, bland looking sandwich which uses cold cuts or prepackaged slices of meat (as opposed to freshly cut meat), has greasy bacon and is served alongside soggy fries. When presented with such an abomination I nonetheless sullenly choke it down and reminisce about better clubs I have had. But all the disappointments are worth it in the long run because when you bite into a finely crafted club sandwich, made with love, passion and fresh chicken, you are treated to such flavour that it can restore your faith in humanity. While I am still vainly searching this Earth of ours for the best club sandwich, I will suggest that anybody who is in Halifax and jonesing for a good club, should stop by the Italian Market as I believe they have the best club in the City. Other close contenders are the Ardmore Tea Room, The Henry House Pub. Check them out, you will not be disappointed.

Best Served With: Well the club goes well with just about anything frankly but it my mind, nothing washes down a fine club sandwich better than a tall pint of The Granite Brewery’s Best Bitter or Propeller Bitter. Damn fine combo.