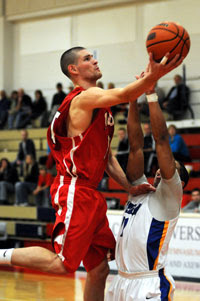 Anthony Sears and the Axemen will be trying to advance to Semi-Final Saturday for the first time since 2008.

Owen Klassen– Potential first team all star averaged a double double with 18 points and 10 rebounds per game. The second year post from Kingston, Ontario is arguably the best inside/outside player in the conference.

Anthony Sears– Athletic guard who can score in bunches and matches up well with other speedy guards in the conference. Averaged 18 points per game.

Justin Boutilier – Was on his was to a possible second team All Star selection before injuring himself at the Rod Shoveller New Year’s tourney. Averaged 10 points and 7 rebounds and can create match up problems with his tricky speed and three point shooting. Has one of the best shot fakes in the conference.

Starting Line Up– Klassen, Sears, and Boutilier are joined by solid point guard Tyler Lutton (8 ppg) and rising star Alex McLaughlin ( 9 ppg ) to give the Axemen a starting five that can compete with any team in the conference. The starters had a combined average of 65 points per game accounting for nearly 90 percent of team scoring.

Shot Blocking– The Axemen led the AUS in blocked shots with an average of three and a half swats a game. Klassen averaged two rejections per contest.

Owen Klassen- Klassen may be the toughest match up in the conference with his combination of speed and size, and his versatile offensive game that features shooting range to well beyond the arc and a solid post game. Klassen is prone to turning the ball over and getting in foul trouble.

Depth– Rookie Thomas Filgiano is a solid contributor off the bench and as a spot starter as Boutlier recovers from injury, but after that the production of Acadia’s bench drops off dramatically. Lauchlan Gale brings some hard work and hustle and Sinclair Brown offers some post defense but there is nobody coming off the Axemen bench who is going to make a serious impact.

Toughness- AUS pundits have questioned the Axemen grit and toughness this year, especially during an extended losing streak through January and February where it seemed they layed down when getting behind. The comeback versus Dalhousie where they won on an Alex McLaughlin tip in at the buzzer (Lauchlan Gale was given credit) was definitely a character building win and they did take care of business at home versus Memorial on the last weekend of the regular season. If Acadia advances to play the warriors of Cape Breton, observers will be interested to see how much of a determined effort the Axemen will give.

Shooting/Turnovers- The Axemen finished seventh in shooting percentage averaging just under 41 percent for the season and finished last in turnover margin with a negative 2.5.

The Axemen had lost nine games in a row before winning three of their last four to qualify for the tournament….Acadia picked up eight points by virtue of two wins over MUN in Wolfville on the last weekend of the season to leap frog UPEI, SMU, and UNB…..Acadia split the season series with UNB, beating the Reds in Fredericton 79-64 and losing 74-71 at home on a buzzer beating three pointer…..Sears has struggled with turnovers this season committing 54 compared to 47 assists……the Axemen have lost in the quarter finals the past two seasons to the Dalhousie Tigers, 88-85 in 2009 and 76-75 in 2010……Acadia posted a record of 1-9 vs. CBU, Dalhousie, and X this season……the Axemen shoot nearly 70 percent as a team from the foul line.
Sportstream is the official webcaster of the Subway AUS Men’s Championships. We’ll be showing every game beginning at 6:00 Atlantic on Friday Night. Follow us on twitter @_sportstream_.