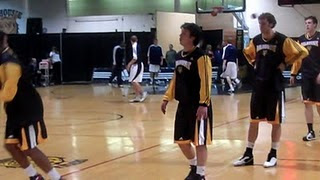 AUS all stars Simon Farine and Joe Schow lead the Tigers into a highly anticipated match up with the X-Men on semi final Saturday at the Subway AUS Championships.

Simon Farine– The fifth year senior averaged 19 points, 6 rebounds, and 5 assists a game in a season that would have garnered him an AUS MVP if it had been any other year than Joey Haywood of Saint Mary`s leading the nation in scoring.

Joe Schow – Second Team All star averaged a double double this season finishing with 15 points and 10 rebound per game. Schow is an aggressive scorer in the post and a tenacious competitor on both ends of the floor.

Stephen Lopez– Lopez blossomed after the Christmas break into the Tigers third leading scorer and their defensive stopper at the guard position. The Toronto native is prone to turnovers but his constant hustle was a driving force behind Dalhousie`s focused and determined effort down the stretch.

Coaching – The Tigers have three AUS Coaches of the Year on their staff. Head Coach John Campbell won his first this season, Assistant Coach Dave Nutbrown won six during his career at Acadia and Assistant Coach Thom Gillespie won the award twice at UNB in 2002 and 2004. Enough said.

Defence – No team in the AUS gets after it in half court man to man defence like the Tigers. Dalhousie finished first in points allowed per game with 68. Post players Sandy Veight and Schow rotate as well any tandem in the country, and expect to see at least three charge calls on the speedy X-Men.

Variety – The Tigers are able to put a lot of different lineups on the floor. Ideally they prefer a traditional 3 guard and 2 post lineup, but they have the diversity to go with a 4 out 1 in. They`ll even put 6`7“ Robert Nortman at centre and surround him with Simon Farine and three athletic swing men for a small but speedy five.

Simon Farine– The consummate floor leader. Farine seems to know exactly when to take charge and when to facilitate to teammates. Assuming he stays out of foul trouble, Farine will play start to finish and has several signature moves that are seemingly unstoppable.

Psyche – It would seem after going 3-1 vs. X and CBU this year that the Tigers have vanquished the ghosts of last season in which they lost every game to the X-Men and Capers by double digits. But if they fall behind by big numbers again, it will be interesting to see if they crumble or come back.

Toughness – Whether it`s fair or not, many AUS pundits feel that the Tigers still aren`t as gritty and mentally tough as the X-Men and Capers.

The Tigers held AUS opponents to under 40 percent shooting in the regular season…..we interviewed Head Coach John Campbell and he said the Tigers are completely healthy and ready to go for Semi Final Saturday……the Tigers have five 5th year seniors with Farine, Schow, Veight, Peter Leighton, and Jason Wang…..Dalhousie finished the season 8-1 over their last 9 games…..Tigers have beaten the X-Men twice during conference play but lost to the X-Men in the final of the Rod Shoveller Classic……newcomer Juleous Grant averaged 11 points per game and has one of the sweetest shooting strokes in the AUS…….Peter Leighton is shooting 42 percent from beyond the arc for the Tigers after playing four seasons at Acadia……Simon Farine`s assist to turnover ration is nearly 3:1 (90:36)……the Tigers will be looking for their second AUS championship in three years and the first for assistant coach Thom Gillespie……in an attempt to match up with the athletic X-Men don’t be surprised to see a lot of Alex Arthur off the bench. Arthur had seen his playing time diminish in February but was recruited with the purpose of matching up with the athletes of X and CBU…..the Tigers were 3-1 vs. CBU and X this season.

Sportstream.ca is the official webcaster of the Subway AUS Men`s Basketball Championships. Follow us on twitter @_sportstream_.