Five-ish books for the summer of 2010

Summer is the perfect time to read what I call “fluff”, something that you don’t have to think about or analyze –you just go along for the ride. This Stephanie Plum Series is one such ride literally. Stephanie is forever either racing in cars, or having her cars blow up. In the sixteenth book of this series there is always at least one or more cars being destroy, in one way or another, as a result of Stephanie’s actions or by the villain trying to get her.

2. Dead in the Family by Charlaine Harris.

Fans of the television series “True Blood” should go back to the original source and read all of the Sookie Stackhouse series. After all, it is from the wonderful mind and fingers of Charlaine Harris that such characters as Sookie, Jason, Vampire Bill and Eric Northman come (excuse the pun) to life. While there are differences between the books and the television series, both are pure entertainment.

This is one of those books that I really wanted to read but for some reason or another I have never had the time. I have read (and blogged) about the author’s other novels, The Girls and The Wife’s Tale. I enjoy how Lansen presents her characters and small town Ontario. In fact the town of Leaford is almost another character of the novels.

4. The Burning Wire by Jeffery Deaver.

Once again a series with a recurring character, but you can read any of the novels as a stand alone book. In other words you do not have to read the novels in order or any of the others in order to understand the plot. Lincoln Rhyme, a world class forensic criminologist, who happens to be a quadriplegic, is a specialist in solving puzzling mysteries, all from his apartment. In order to do this he uses NYPD detectives Amelia Sachs and Ron Pulaski as his eyes, ears and legs to “walk” the crime scene grids for him. For those people who love the show CSI, these are the novels for you (and visa versa, perhaps).

This novel is the one I am most anticipating. A dark psychological thriller set in the world of the Internet. Not everyone who is your facebook pal, or in your chat group, are who they say they are. The question is “who is the blueeydboy” and what is his motive or desire? 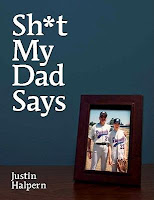 To tell the truth I am one of those people that is wary of social media things, plus I figure that my life is pretty boring. After all who cares that I get up, use the same toothpaste, ate the same breakfast, etc… every day. So when a co-worker kept telling about a particular twitter feed, I basically said “yeah, yeah whatever”, even though it has over 1,406,000 followers. But now this feed has been produced into a book and is becoming a television show. I thought I would at least read the book. Maybe you might want to go to the original source yourself. Happy Tweeting!