Hartsburgh Finally Finished in Ottawa
Like putting a bullett in a mortally wounded animal, the Sens finally put Craig Hartsburgh out of his misery today.
Is the Senators mess Hartsburgh’s fault? Of course not. This is a dysfunctional team. It’s ironic that the final nail in Hartsburgh’s coffin came after Ottawa’s dimal loss to the Caps yesterday. Then they hired their AHL Head Coach to take over, just like the Caps did last year with Bruce Boudreau at this juncture of the 07/08 season. Hopefully it will work out for the Sens like it did for Washington.

Better Catch: Tyree in o8 or Holmes in 09
What was the better catch? David Tyree’s pinning of the football to his head, coming down with Eli Manning’s long bomb, after he somehow escaped the Patriots pash rush…or Santonio Holmes’ tip toe catch while surrounded by three Arizona defenders on a perfectly thrown ball by a scrambling Ben Rothlisberger?

I asked Steve Sumarrah, Head Coach of the Saint Mary’s Huskies (interview will be on CKDU Sports, Monday at 10:00), and he thought the Tyree catch was bigger. His reasoning was that Manning’s scramble, combined with the enormity of the situation makes it the bigger catch. I think I have to agree. Manning’s magic, Tyree’s once in a lifetime catch, and the fact that it was 3rd down, with the Giants at midfield, and only 1:05 left on the clock, makes it a bigger catch.
The Holmes catch was amazing, and Rothlisberger’s throw was excellent. But if the pass is incomplete, the Steelers could kick a gimme field goal to tie the game and send it to overtime.
Regardless, if Tyree’s catch is the greatest in Super Bowl history, Holmes’ is probably number 2.
Greatest Super Bowl Ever?
It seems like whenever there is an outstanding Super Bowl, people say it’s the greatest ever. We have short memories when it comes to these things. Certainly the greatest Super Bowls, with the exception of Pittsburgh beating Dallas 35-31 in the mid seventies, and Joe Namath’s Jets beating the Colts in 69, have been played in the past 10 years. Almost all of the Super Bowls in the eighties and nineties were duds.
You could make a case for any of the following games as the greatest Super Bowl ever;
Titans/Rams 1999 (Titans come 1 yard short of sending game to OT)
Patriots/Panthers 2003 (teams combine for 35 points in 4th quarter)
Patriots/Giants 2008
Cardinals/Steelers 2009
Kurt Warner: Most Valuable Person
How could you not root for Kurt Warner on sunday? Asides from his rags to riches story of the late nineties, when he went from grocery bagger to Super Bowl MVP, and his improbable comeback with the Cardinals featuring this past regular season when he nearly won league MVP. Before the game he was given the Walter Payton award for service to the community. This guy plays 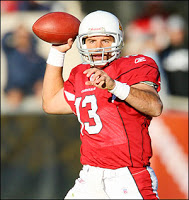 quarterback in the NFL, has 7 kids (take that John and Kate), and still finds time to give more to the community than any other player in the game! That’s a guy I’ll cheer for.