With the rise of electronics, children spend less time in the great outdoors. Not only does that mean that kids are more unfamiliar with their natural surroundings – as Jamie Oliver infamously discovered in the US on his television show, American Food Revolution – but it has also been linked to developing behavioural problems. Unsurprisingly, this has been termed – Nature Deficit Disorder (NDD). An elementary school in Sackville, New Brunswick has targeted NDD by creating an outdoor education classroom that can be used to teach any lesson outside. This isn’t just a single classroom – this is the outdoor classroom mecca which boasts four accessible gardening beds, a classroom-sized lean-to, a pirate ship classroom, and their very own extension of the Waterfowl Park created by Ducks Unlimited (see photos below). The project was initiated in 2013 by Tantramar’s Regional Centre of Expertise on Education for Sustainable Development, and has relied on funding from the Environmental Trust Fund, and partnerships with Mount Allison University to help with each stage of the classroom’s development – from the planning stages, to building, to curriculum development, to helpers within the classrooms. 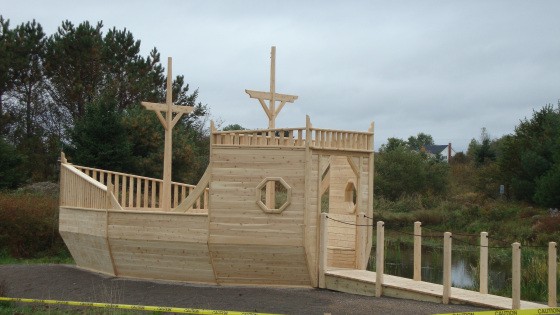 The pirate ship classroom at Salem Elementary – inside there is seating for an entire class and there’s even a real ship’s wheel! (Source: RCEtantramar.org) 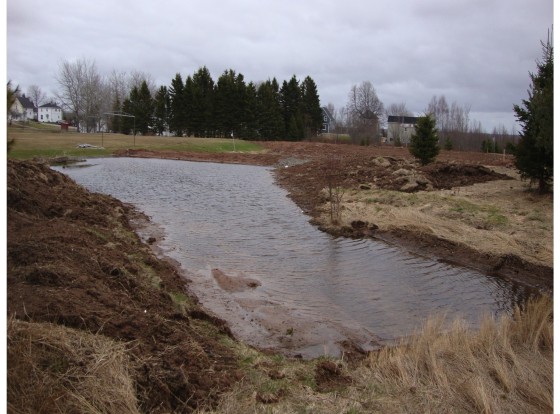 The wetlands were created by Ducks Unlimited and have welcomed numerous ducks, and other critters to the water for the enjoyment and education of the children. (Source: RCEtantramar.org).
As a celebration of these partnerships, Salem Elementary held an Outdoor Education Day in late October where classes spent the entire day rotating around to different stations, picking up a new skill at each stop. Pumpkin growers showcased the variety of shapes and sizes that the squash came in; a weaver brought in a loom and each class added natural materials to create a mat by day’s end; Japanese exchange students at Mount Allison University taught traditional Japanese games; and I taught them how to save seeds.

The seeds were from the local community garden, which have been planted in that location for a number of years. I told the kids that the seeds we would save were ‘Sackville Super Seeds’ – they were adapted to the crazy Sackville winds, the sideways rain, and the flooding conditions. These seeds would grow taller, bigger, and have more beans than any seed that they could buy. They then learned how to separate the chaff from the seed. Though this can be done by simply breaking the pods open, I had the kids put the pod inside of a plastic bag and stomp on the closed bag. Not only were the children impressed that no matter how hard they stomped on the beans that the seed didn’t break, but they also marvelled at the different colours and shapes of the beans. The class got together after all of the beans had been harvested and compared their Sackville Super Seeds, and after the 15-minute session, they were begging their teachers to plant the seeds in the classroom at the end of the day. 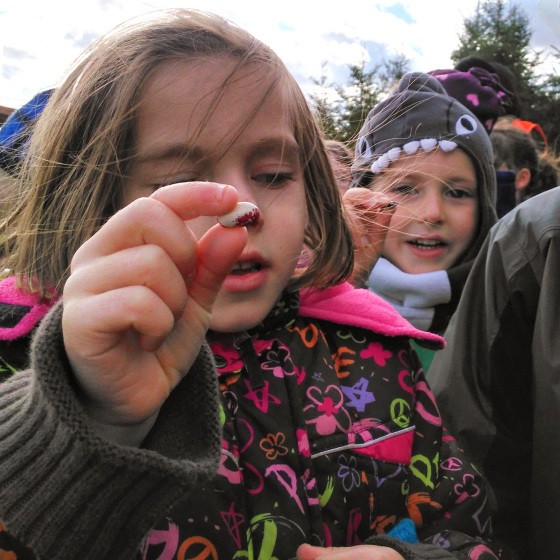 Releasing kids from an institutional environment brings back that curiosity, and brings about a different type of learning – teaching the lifecycle of a plant in the classroom would not get the same effects as were present at the Outdoor Education Day. These kids were so excited about growing vegetables that they couldn’t wait to get back into the classroom to plant it, watch it grow, eat some of its fruit, and then save the seeds the following year. Incorporating this into the curriculum is a fantastic way to reconnect people to their plate, and the integration into the education system is a fantastic first step.
Resources:
-RCE Tantramar http://rcetantramar.org/
-Salem Elementary School: http://rcetantramar.org/education-for-sustainable-development-2/outdoor-environmental-classrooms-salem-elementary-school/
-Seeds of Diversity Canada https://www.seeds.ca/

Guest blog post by: Norma Jean Worden
Norma Jean has spent the last three months as a student Research Assistant for Seeds of Diversity-Atlantic and the Our Food Project Cumberland, working out of Sackville, NB.