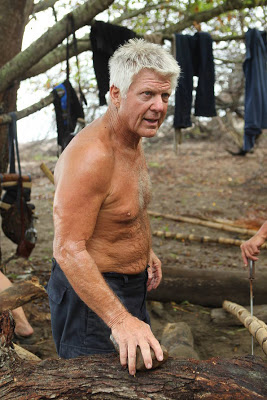 I’m just going to come out with it right now: I have no idea who Jimmy Johnson is. When the news broke that he was going to be on Survivor I had to Google him. Apparently he’s kind of a big deal. But I’m thrilled that he’s on Survivor for one reason, and one reason only – everyone has started calling him Coach. Can you imagine the heartbreak that Coach “Dragon Slayer” Wade is feeling right now? The man already has serious self-esteem issues! God, I hope they start calling Jimmy Johnson “Dragon Slayer” as well. That would be priceless.

OK, so Survivor is back and a celebrity is in the mix. Not that it hasn’t sorta-kinda happened before. We had Taj, the Grammy-winning gospel singer who was married to former NFL-er Eddie George, and former NFL quarterback Gary Hogeboom. (What is it with the NFL and Survivor?) What was great about Wednesday night’s episode of Survivor was that it set a completely different tone from last season. Heroes vs. Villains was such an epic season and was so intense from the moment the castaways stepped onto the beach, it set an impossibly high standard. So instead of competing with that, it looks like Survivor: Nicaragua is going in a different direction – comedic. The opening sequence, and the episode in general, did not come close to matching the drama of many other seasons. But the tribes include quite a few interesting characters.
He Don’t Impress Me Much 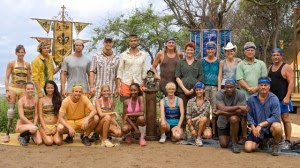 When the castaways arrived in Nicaragua for Survivor 21, first impressions were formed right away. Of course, several people noticed Jimmy Johnson, but everyone had a different take. One guy said he didn’t want to be on Jimmy’s team at all, and another guy was devastated when he found out he and Jimmy weren’t on the same team. Then there was dumb blond Jud, who gaped at how there weren’t any fences in the jungle like there are at the zoo, stepped on something sharp, picked up a crab and was shocked when it pinched him, and asked a teammate how she tells her prosthetic leg to move. I hope this kid (who was christened Fabio by his tribe) sticks around because I can’t wait to see what kind of strategy he’ll come up with.

The tribes, as you know, have been split into older and younger. We didn’t get to see a whole lot of the younger tribe, other than a few key moments. We know Jud is a flake. We know Kelly B. has a prosthetic leg, and that most people view her as competition. If you go to the end with a chick with one leg, she’s sure to beat you. No one likes saying it, but it’s the truth. I was glad when she finally decided to show her tribemates her prosthesis though, because it was painfully obvious. Hiding it would have only given her tribe a reason to vote her off. And, we know they’re cocky. They showed up to the first challenge performing some sort of war cry/dance combo, which ended up looking embarrassing rather than threatening. Probst nailed his reaction, it was the perfect mix of judgment and reserve.

The older tribe is full of crazy characters. Some of them seem like they could be strong competitors, others are just weird. I have to give credit to Jane for immediately using glasses to start a fire. Season after season, I wonder why no one knows how to make fire. That is the one thing I’d be practicing before heading out to play Survivor. I wasn’t sure how I’d feel about Jimmy Johnson being on the show, but I think I like him. I like that he’s a true fan of the show – he tried twice before to make it on. I like that his pep talks aren’t as annoying as most coach’s speeches. I like that he named himself as one of the weakest people on the tribe. However I’m surprised at how much her underestimated the difficulty of Survivor. Buddy was throwing up within the first day or two, and then marveled that he hadn’t thought it would be so hard. There are a couple of problems with this.

1. The game has JUST started. It’s going to get a hell of a lot harder.
2. Who watches Survivor and thinks “That doesn’t look so hard”? People come back from that game completely eaten by bugs, starving to death with their hair falling out. People get sick or injured on the show ALL THE TIME. If you think Survivor looks easy, you haven’t been paying attention.

Idols and Medallions and Challenges, Oh My!

Here’s a question: Why did only one tribe receive a clue for the hidden immunity idol? Kelly B. and Alina from the younger tribe discovered it when they went to get tree mail, but no one on the older tribe got one. What gives? The hidden immunity idol is apparently going to be harder to find this season, but I’m worried. Along with the medallion of power, it seems like there are too many advantages available this season.

Yes, the medallion of power. That awkward looking necklace thing that someone from the younger tribe scored at the beginning of the episode. They gave it up to the older tribe in exchange for flint and fishing gear before knowing what it could be used for. It turns out, using the medallion of power will give you an advantage in the immunity challenge. But when you use it the opposing tribe gains possession of it, and they will then have the option to use it.

I think it sounds stupid. I don’t want to see challenges where one team has an advantage. I guess the challenge lies in deciding whether to use it. The older tribe decided not to use it in the first challenge, which I thought was a good call. It wasn’t a challenge based on strength or speed so they were on equal ground with the younger tribe. Why waste it? 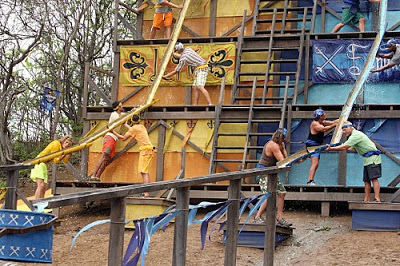 The challenge ended up being kind of lame, but according to EW.com it did not pan out how the producers expected it to. Check out Dalton Ross’s blog for the details on what went wrong, but the result was a pretty average first challenge – and a challenge that the older tribe lost. I was really rooting for “The Antiques”, as one of the younger guys called them. It would have sent a great message to those cocky, chanting, high-fiving kids if they’d beaten them in the first challenge. Alas, the older ladies could not complete the final puzzle quickly enough and they had to send one of their own packing.

Back at the antique’s camp, Other Jimmy threw a bit of a fit. It was unclear what he was really upset about, but it definitely screamed “crazy!” in my opinion. According to Dalton’s EW blog, Other Jimmy had made some idiot comments during the challenge to try and confuse the other team, and he was scolded by Football Jimmy. So perhaps it was a case of a bruised ego, but since Other Jimmy isn’t exactly in peak physical condition I would have been looking to cast my vote his way.

Instead, the tribe awkwardly discussed either voting out Jimmy Johnson or Wendy the Goat Farmer. No one wanted to make a stand, so people just kept saying things like “I’m all for keeping the tribe strong” and then stood around in uncomfortable silence. Chances are most people had decided to vote out Wendy before they got to tribal council – after all, the vote was unanimous – but if anyone was on the fence, Wendy certainly made the choice easy.

From the second she arrived, Wendy provided a lesson in how to get voted out first on Survivor. She made a rushed, manic alliance with the first person to help her carry a log. She didn’t talk much and kept to herself. She wore a weird, fringed jacket. And then she let it all fly at tribal council. The horror! She did everything you should not do at tribal council. She showed her true feelings and called out all her tribe mates on not wanting to get to know her better. Apparently because no one asked her how old she is, that meant no one cared to get to know her. Um, what? Who asks a grown woman how old she is? Now, if she’d said that no one bothered to ask her name, that would be a different story. And, frankly, a story she still SHOULD NOT HAVE BROUGHT UP AT TRIBAL COUNCIL. After her humiliating speech, she cut Probst off before he could send people to vote because she STILL had more to say! She told everyone why they should keep her around: because she doesn’t have blisters on her feet! Well, then! I don’t understand how the tribe possibly could have voted her off after receiving that information, but vote her off they did. Somewhere, Wendy’s husband was collecting money from a bet – he’d told her she’d be the first voted off because she talks to much.

Overall, I thought it was a pretty decent first episode. We haven’t seen much of the younger tribe yet, but so far I’m liking Chase, Tyrone (he had the best facial expressions during tribal council), Marty and Yve. I have to make my picks for the Survivor pool I’m in, though, and I’m torn. It looks like the older tribe has a long road ahead of them. Fearless Leader Jimmy Johnson doesn’t seem like he’ll cut it for too much longer, and there are a lot of quirky personalities that could cause conflict. But we’ve barely seen anything from the young folk and it looks like trouble could be a’brewin’, so I’m hesitant to put them at the top. Who do you think the frontrunners are? Do you think this season looks promising? Would you keep Jimmy Johnson around just for the pep talks? Sound off below!

Survivor: A lesson in how to get voted out first
https://haligonia.ca/survivor-a-lesson-in-how-to-get-voted-out-first-25550/