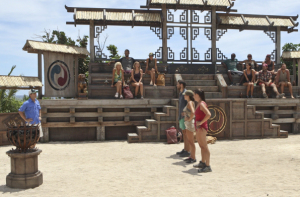 Ah, the merge! As Hayden said, this is when Survivor really becomes SURVIVOR. This episode was predictable, but it was interesting to see how the tribe dynamic shift and I have pretty high hopes for the rest of the season.

I’d be surprised if alliance lines stood firm all the way to the end.

Before the final “duel”, Laura B. said that voting her out over Vytas was a dumb strategic move – and she was right. Vytas has Monica, Tina and Katie wrapped around his little finger. They thought they voted strategically and told themselves that Laura B. was a loose cannon, but they were really voting based on popularity. They like Vytas, and Laura B. was kind of weird. Plain and simple, and bad Survivor strategy.

The final Redemption Island challenge had Laura M. written all over it, but interestingly her daughter Ciera wasn’t exactly rooting for her. Ciera was worried that her mom re-entering the game would hurt her own game. I think that was a fair concern, but on the other hand Laura was another vote in Ciera’s alliance. 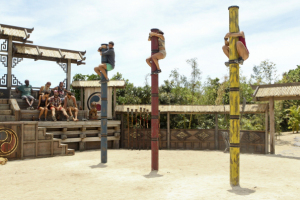 The challenge was staying perched on a pole for as long as possible – a challenge that always benefits the small or the yogis. (I’d love to know how Vytas would have performed, had he been voted out instead of Laura B. I think he would have given Laura M. a bigger challenge.) John was out quickly, eventually followed by Laura B. Unsurprising.

Laura rejoined the others on a newly merged tribe. Oh, how I wish this had been the last of Redemption Island. Laura could have given a HII clue to another player or kept it for herself, but instead she burned it. Gee, how exciting.

After the traditional merge feast, the tribe was abuzz with all kinds of strategy. Basically, things broke down in two ways:

Tyson was sticking with his plan that himself, Gervase, Hayden, Caleb, Ciera and Laura M. would vote out Aras.

Aras thought that him, Tina, Monica, Tyson and Gervase were still strong. With Katie and Vytas brought in, they’d have the majority and, as Aras put it “a distinct advantage”. UH-OH! Aras’s over-confident confessional as good as confirmed his elimination. Sometimes these Survivor producers are a little heavy-handed with the foreshadowing. 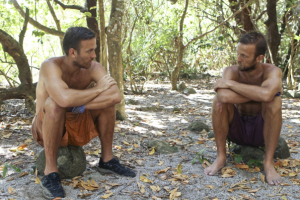 Later, Aras and Vytas had a little tête-à-tête. Aras told Vtyas “definitely keep Tyson around”, even though Vytas identified him as a threat. Aras has had his head buried in the sand, oblivious to how others perceive him and Vytas. They admitted that the other players SHOULD want them out, but assumed everyone is too dumb to make it happen. Very cocky, and very stupid.

Ciera was a little nervous about bringing her mom into the alliance, because it was formed by all solo players. I think Ciera has reason to be concerned down the line, but right now everyone needed Laura’s vote. So long as Tyson and Gervase were willing to betray their original alliance (and they were, heartily) they were OK. 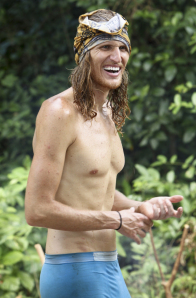 Before the challenge, Tyson went off into the woods to look for the Hidden Immunity Idol. (As an aside, Tyson is so tall and skinny at this point that it looks as though a regular man has been stretched.) He found it, easily, so now that’s a thing. If Tyson plays his cards right that could help him make it to the end, but Tyson has a habit of overplaying his hand. We’ll see.

Tyson also told Monica about the plan to vote for Aras. Very interesting! I’m not sure why Tyson did that, becuase they didn’t need Monica’s vote. He risked her telling the others about the plan. However, he offered her a better place than the others did – final three instead of final five.

The first individual Immunity Challenge was a memory game, which was a nice change of pace from the obstacle-course based challenges we’ve mostly seen this season. I always like seeing who performs well at these. Sadly, Monica was out first. Laura, Ciera, Aras, Vytas and Gervase were the only players to make it to the second round. It came down to the brothers, and Vytas won.

Strategy talk before or during Tribal Council was all pretty weak – I felt like the writing was on the wall. Aras was blindsided, but luckily he’s a guy who can appreciate a good move. He went out with a “well-played”, but he’s on Redemption Island and could easily re-enter the game.

Tina and Katie voted Ciera, and Aras and Vytas voted Laura. Monica went with Tyson and voted Aras, so it will be interesting to see how that pans out next week. Obviously Tina is angry, but she told Tyson that he lost five jury votes – does she know Monica betrayed her too? I can’t wait to see the fallout from this vote.

As I said, I think the outcome here was easily predicted early on, but I like where this season is headed. These alliances do not feel rock solid, and I like a game where people aren’t locked into alliances and don’t make big moves. I feel like anything could happen.