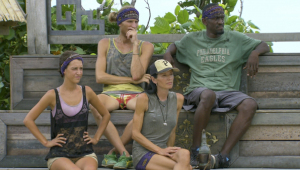 That’s a wrap, folks! The season finale of Survivor: Blood vs. Water aired last night, so if you are trying to avoid spoilers, come back when you’ve seen the episode.

Otherwise, click on through so we can talk about how everything worked out!

Following Tribal Council, Tyson talked about using the Hidden Immunity Idol to keep Monica confident – he wanted to go to the end with Gervase and Monica no matter what. Fair enough – I thought Tyson had the best chance of winning no matter what going into this, and it made sense for him to stick with those two. Even though she didn’t turn on the guys that night, Monica was still toying with the idea of bailing on her alliance. She confessed to the camera that she planned to play both sides once a fifth person re-entered the game from Redemption Island.

The One That Counts

Before the final “duel”, Hayden said he liked his odds of winning against two grandmas. (Tina’s not a grandma, FYI.) Um, Hayden, did you meet Laura? I wouldn’t have felt confident facing off against her, especially in an endurance challenge.

The challenge was two place one foot on a see-saw, without letting a vase on the other end fall. I feel like I could have rocked this challenge, and guessed that anyone who does yoga would perform well. Laura struggled all along, but it was Hayden who dropped it first. 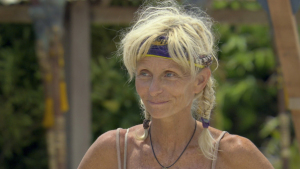 What I couldn’t believe was when Laura said “Tina, let me have it, please.” WTF? I understand desperation, but come on. Why would Tina EVER just give up on the final challenge? That was bull. Of course, Tina shot her down. Laura dropped it, and with that Tina was back in the game.

It’s too bad that Laura couldn’t bring it home after performing like such a champ out there, but like it or not that’s how Redemption Island works. Even I must admit that Laura’s moment with Ciera before she was eliminated from the game was pretty sweet.

At camp, Tina was all over the place looking for the Hidden Immunity Idol – unfortunately for them, Tyson already had that. Ciera knew it was a possibility, and their only other option was to convince Monica to vote with them. Tina pushed too hard, but Ciera did a better job of making the argument. I actually thought Monica should go with the girls – Tyson seemed like a guaranteed win, and she’d at least have a shot against the other women. 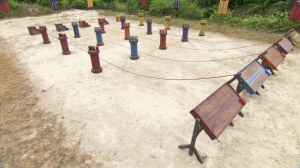 For the Immunity Challenge, players had to balance an unstable table using a rope, and place blocks on it without it tipping. It was a little boring to watch, despite a lot of back-and-forth. Eventually, Tyson won – not good news for Tina and Ciera.

At camp, Tyson decided to just let the others decide who should be voted out. Monica wanted to vote out Tina, who has a lot of friends on the jury. Gervase wanted to vote out Ciera, who he thought was a sneakier player. I actually agreed with Monica here, Tina seemed like the bigger threat. Gervase pushed her too hard while arguing, and irked her enough for her to continue the conversation with Tina and Ciera. 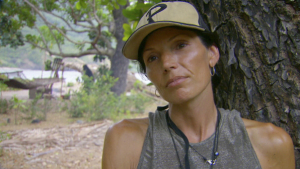 I wanted Monica to make the move and vote out Gervase. But it was all dependent Tyson NOT giving his Hidden Immunity Idol to Gervase. Monica knew he had it, so she knew they had to feel very confident that Monica would stay true to the alliance. But at Tribal Council, she made a tearful speech about it being “her night” and “her move”. Uggghhh. Well, I figured that if she was going to turn on Gervase, she’d just blown her cover. Why, at that point, wouldn’t Tyson just hand Gervase his Idol? Taking it home as a souvenir would have been the world’s dumbest move.

Tyson did hand the Idol to Gervase, and Ciera was voted out – with three votes. So, how was this Monica’s big move? What did she do that made it “her night”? That was such crap! I was rooting for Monica all along, but she disappointed me. I wanted her to make a real move, not cry at Tribal Council and then stick with the norm.

The final Immunity Challenge was an exciting one. Players had to race through a big obstacle course to collect puzzle pieces, running up stairs and sliding down a massive slide along the way. The puzzle would reveal a clue to solving a combination lock, which released a flag to win the challenge. 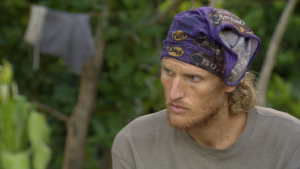 It was close all along – Tina was pulling up the rear, but she’s so good at puzzles that I thought she might still have a chance. But Tyson pulled ahead, solved the lock on his first try and won a second challenge. You’ve got to hand it to the guy, he pulled off these wins when they counted. (I wouldn’t 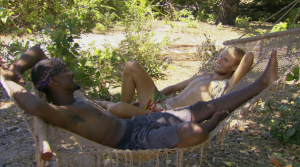 be surprised if he was holding back all season because of his injured shoulder, and was ready to push hard when he had to.)

I was only disappointed to see Tyson win the challenge because I figured it would make the rest of the episode pretty predictable. But I knew it would be well deserved.

Tina’s only, small hope was to convince Monica to force a tie with her. If Tina and Gervase both got two votes, they’d have a fire-building challenge that Tina would likely win. But why would Monica even be swayed by that a little? Tina argued that Gervase was a social threat, a player that everyone on the jury likes. Ha! That player is Tina, who had time on Redemption to butter up the jury. Her own daughter, her pal Laura. I thought Tina definitely had friends on the jury and a real shot at winning.

I actually thought Monica might go for Tina’s plan, but I didn’t want her to. Tyson was the threat to win, not Gervase. I’d rather sit next to Gervase than Tina. And I guess so did Monica, because that’s how she voted. Tina was voted out, 3-1.

May The Odds Be Ever In Your Favor

I did not think Gervase had an ice cube’s chance in hell of winning. I thought Tyson had it in the bag. Monica didn’t seem very well liked, and though she was trying to TELL everyone that she was making her own decisions, it never LOOKED like she was to the jury.

Gervase spoke first, and talked about his 13 year break from the game. He spoke like an athlete – “a tough, long, hard road”. Monica then spoke, and immediately made her case that she’s not a lapdog. I thought her argument was decent, but I didn’t think the jury would buy it. Tyson focused on the target on his back going into the game, and then he cried when he talked about Rachel. I hate people who cry, and I wanted Tyson to focus more on his strategic prowess. But his speech was good.

The jury’s questioning wasn’t as intense as it has been in some previous seasons, but I was shocked by what a crazy pummeling Monica took on a personal level. Looking at the questions, I thought most players had already decided to vote for Tyson. No one seemed to care much about Gervase. And Monica, she was demanded to be more vulnerable, stop being so fake, show her true personality, etc. I mean, what was she supposed to do?

The only vote that was definitely not for Tyson was Vytas, because he said he was going to stick to his in-game promise to not vote for Tyson. I figured he’d vote for Monica instead. I also thought that maaaaaybe Laura or Tina would vote for Monica, respecting another mom who played a strong game.

First things first. What the hell was up with Tyson’s hair? I’d like to know what kind of deep conditioner he’s using.

Probst read the votes, and indeed Tyson won the game with seven votes to Monica’s one and Gervase’s zero. (For the record, it was an all Mader finals – me, my sister and my mom left in the office pool. My sister and her boyfriend won with Tyson, so congrats to them!)

I was disappointed in Monica’s interview – she kind of sugarcoated and backtracked on everything she’d been saying all season about wanting to do something for herself for once… and in doing that, she kind of proved what everyone had been saying about her during the game. She had her Football Wife face on, and I don’t like it as much as the tough, bug-eating, challenge-winning face. Gervase’s interview was as interesting as his game play.

I wish Probst hadn’t wasted so much time on Rupert and Colton during the reunion. I hate them. I also could have done without comments from Missy in the audience (or whatever her name was) and an ad for the terrible sitcom John Cochran writes for.

Vytas and Aras said their relationship hasn’t changed, both Vytas and Hayden said they’d play again, and Kat said that she’s “top heavy” now to try and hold on to Hayden (whaaaaat???? Kat’s Instagram feed suggests that this means exactly what you think it would mean…).

Poor Tina and Katie did attend the reunion show, only a couple weeks after Tina’s son died in a car accident. God love her, she used her time to speak about seatbelt safety.

Well guys, what did you think of this season of Survivor? I think the right person won – Tyson was a key player from the start and really dominated strategy in the latter half of the game. It took him a few tries, but he earned the win. I think the strengths of this season were casting and the Blood vs. Water theme, while Redemption Island and the detested final three instead of a final two were drawbacks.

Unlike some people, I probably wouldn’t care to see Ciera play again. I’d like to see Hayden and Vytas return, though. I also wouldn’t mind if Caleb came back. (I have no interest in seeing Kat or Caleb ever again, though.)