On last week’s episode of Survivor, the new Brawn-Beauty combo tribe blindsided Cliff by voting him out of the game – and thus also blindsiding and alienating his allies, Woo and Lindsey. There are two ways to handle that: 1) Hope you don’t go to Tribal Council again soon so you have time to figure out a new plan.

More after the break…

Guess which player chose to quit?

We’ve seem some pathetic quits in the decade+ that Surivor has been on the air (hi, Colton!) but this has to be one of the worst. After returning to camp, Trish and Lindsey butted heads over the vote. Trish didn’t say anything too harsh, but Lindsey insulted Trish’s personality AND physical appearance. It was just shy of “On Wednesdays we wear pink” behavior. 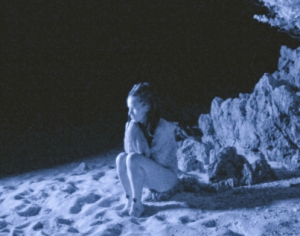 Then Lindsey walked down the beach to sulk alone, and eventually called Probst in. She wanted to quit because Trish was just too annoying to deal with. Like, what? What? Nothing even happened! Lindsey was worried about doing or saying something that would set a bad example for her daughter, so she decided it was best to just give up a shot at the million bucks she desperately needs and quit. Because THAT sets an amazing example.

What a moron. Bye forever! Won’t miss you!

Probst broke the news to the tribe, so they didn’t even have a chance to convince her to stay – not that people seemed particularly surprised or disappointed to see her go. Woo privately acknowledged that he’s now in a precarious position.

Reward time! When the tribes arrived, everyone was surprised to see Lindsey AND Cliff gone – two Brawns on a tribe that had been dominated by them. Sarah was over the moon, but I think she should have contained her excitement a little. Showing how pleased you are to see two of your enemies ousted also reveals that your friends remain in the game. If I were her, I’d be trying to play my cards a little closer to the chest. 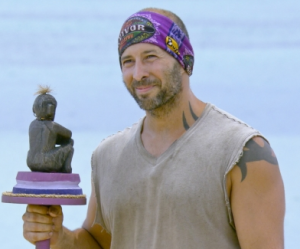 The Reward Challenge was one of my favorites, where players go head-to-head and try to knock the other person’s idol off a pedestal before losing their own. There were some good match-ups, and I was impressed that Spencer managed to beat Woo during their first battle. Woo beat Spencer on the second go-around though, and his tribe won Reward.

The prize? Two tribe members – Woo and Tony – got to follow the losing tribe back to camp and raid it. The boys took the comfort items and the fishing gear. They also got a clue to a Hidden Immunity Idol, and Tony had the bright idea to mess with the competition a little. He told everyone that the instructions required them to choose one person to get the HII clue. They chose Jeremiah and gave him the clue for the other beach, just so he’d be targeted later on. It was a pretty smart plan, I’ll give him that.

Tony might smart, but he’s cocky. When he returned to camp, he bragged up a storm about pulling one over on the opposite tribe. Then he announced to the whole tribe that he’d lied about working in construction, and is actually a cop. He even said something about planning to lie about having a kid as well, but not going through with it. Why reveal all that? It made him look completely untrustworthy, and LJ was immediately wary. Plain and simple, Tony is too arrogant for this game.

Over at the other tribe, Jeremiah wasn’t so sure how real his Hidden Immunity Idol clue was. First of all, it was exactly the same as the clue for his old Beauty camp. Second of all, they lost the challenge so why would someone from their tribe be rewarded? I thought he brought up some great points, and he was dead on – maybe Jeremiah’s smarter than I was giving him credit for. Unfortunately, no one from his tribe believed him. 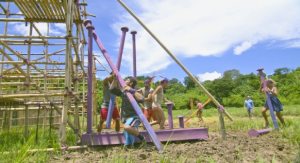 This was a good week for challenges! The Immunity Challenge was a big obstacle course, with a puzzle at the end. The tribes were pretty neck and neck at first, until Tony really blew the difficult task of using a key to unlock a machete. Luckily for him, Woo and LJ made up a ton of ground in the puzzle, beating out Sarah and Spencer.

So a tribe that was comprised of three Brains, three Beauties and one Brawn had to attend Tribal Council. We’d already seen the Beauty trio collapse like a house of cards, but I still couldn’t believe just how quickly they were willing to throw in the towel. No one was looking at Sarah as a swing vote OR a threat – it was Jeremiah vs. Alexis. Each one tried to convince the tribe that the other was completely untrustworthy.

This is a classic example of how much luck plays a factor in Survivor. Before the tribal shake-up, the three Brains and Morgan were all in trouble. Now, they’re in control of their tribe. I think it would be wise for the Brains to adopt Morgan as their fourth – she doesn’t have any other ties in the game.

The tribe chose to vote out Alexis. Did they make the right decision? Honestly, I have no idea. Alexis, Jeremiah and Sarah all have the potential to flip when the merge comes. And that merge comes next week! These new tribes have barely had any time together, so with a merge I think anyone could flip. Sarah could go back to Tony and the Brawns. Woo could jump ship. Jeremiah could hook back up with LJ and Jefra, but they’d need others.

As it stands now, there are three brains in the game: Kass, Tasha and Spencer. There are four beauties: LJ, Jefra, Jeremiah and Morgan. But Morgan is not friends with her fellow beauties. There are four brawns: Sarah, Tony, Woo and Trish. But does Woo have any allegiance left with his fellow brawns, now that Cliff is long gone?

Based on that, I think we might be in store for a few more blindsides. What do you think?