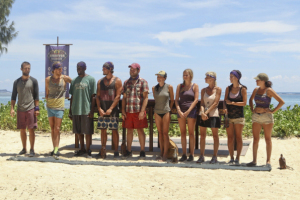 Despite featuring two Immunity Challenges and two Tribal Councils, this episode of Survivor wasn’t one of the most exciting of the season. That’s likely why producers combined six days into one episode – the votes were relatively predictable, and the challenges were decent, but both non-physical.

That said, I think within a couple more votes things will start to get sloppier and more interesting. A strong core alliance hasn’t developed this season, but rather pairs. Not just the loved ones pairs, but others like Tyson and Gervase, and Caleb and Hayden. There are cracks, a couple lone wolves, and places for players to move up the totem pole.

After the Aras blindside, chaos ensued. Vytas played his cards right, telling everyone that he was sorry to see his brother go but appreciated the move as a fan of the game. Tina wasn’t quite so gracious, telling Tyson and Monica that they’d lost a boatload of final jury votes with their betrayal. One by one, everyone told her that Aras had betrayed her by making alliances with everyone. It was an awkward position for Tina, and one you could tell she regretted putting herself in.

The next day, Tina told her daughter to make whatever move she needs to stay in the game.

The first Immunity Challenge was a Survivor classic called “Here, eat this disgusting food”. The first round went in two heats, and everyone had to down forty meal worms. FORTY! 4-0, forty. Disgusting. Tyson, Monica and Vytas moved on from the first group and Hayden, Gervase and Caleb from the second.

Next the players had to eat pig intestines. This was by far, I thought, the grossest of the lot. It seemed so…chewy. Monica and Gervase moved on to the final, with Vytas putting up a good fight. Is there anything worse than almost making it to the next round in this? You don’t get to win Immunity, AND you still basically ate the entire thing. You’d almost want to pull a Ciera and just spit the thing into the grass and call it a day.

The last challenge was to eat two grubs, the gross food item that was apparently Gerv’s downfall back in the original Survivor season. He did a lot better this time, but Monica beat him to it. You’ve got to hand it to her, Monica is one tough lady. I was impressed. I wanted to barf, but I was impressed.

Wait!!!! They eliminated the cow eyeball round!!! The grossest round of all! #Survivor 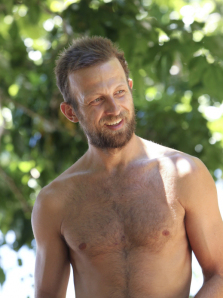 As Tyson has the Idol but is wisely keeping that information to himself, the tribe decided they’d need to split votes between Vytas and Katie. Vytas told Katie that he wouldn’t turn on the ladies, but of course he sang a different song to the camera. He’d vote Katie in an instant if it would keep him in the game, and I applaud him for it.

Vytas made good arguments on why he should remain in the game over Katie – break up another couple, take out a female to prevent an all girl alliance, etc. He was pushing hard, but I thought it would work for him. Then at Tribal Council, he went too far.

This might be the first time I really thought Vytas screwed up in the game. At Tribal Council, he made a big deal about feeling angry at seeing Aras get eliminated, wanting revenge, AND he needlessly attacked Monica. For someone who was very much on the chopping block, it felt like a lot.

Vytas was voted out, and sent to Redemption Island to hang with his bro. Usually I would not think that a Tribal Council performance would get you voted out. People have their minds made up long before going to Tribal Council, and it’s rare for the decisions to change. But Moncia freely admitted that she was supposed to vote for Katie, and switched the vote because Vytas was mean to her.

Uh-oh. I wish Monica hadn’t done that. Gervase was mad – what if that move had resulted in someone on their own tribe getting eliminated? (Have we learned nothing from Tyson?) Monica is seen as a paranoid loose cannon, and someone who rocks the boat. Not. Good.

(In that vote, only Ciera ended up voting Katie – everyone else voted Vytas. Vytas himself voted for “Thai Sun”. Why? Why would he not vote for Katie? Curious.) 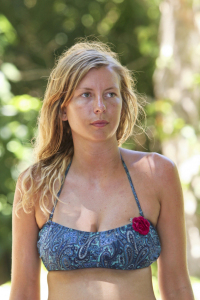 Time for  another Immunity Challenge! This one was all about dexterity. Players had to balance a sword on a shield, and then stack coins of varying sizes on the handle of the sword. It came down to Katie, Tyson and Hayden and Katie won. It’s always nice to see someone who’s in danger pull off a win, but this meant Katie’s mama was likely going to be the one to go.

Tina spent the rest of the day attempting to search for the Hidden Immunity Idol. The rest of the tribe kept close watch of her, but they still weren’t 100% sure that she hadn’t found it. Tyson, of course, knew. Tyson seems in constant struggle between revealing he has the Idol out of sheer laziness, and actually playing the game. 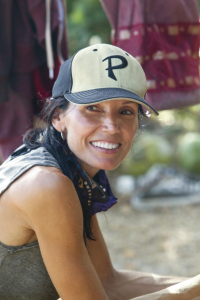 Since Tina could possibly have the Idol and Katie had Immunity, the tribe couldn’t split votes without revealing the bottom of their alliance – Monica. She’s too paranoid and talkative, and she blew it during the last vote when she didn’t follow instructions. I’m beginning to realize I have no chance of winning that Survivor office pool. Even if she makes it to the finals, I don’t think she can win.

The truth bombs just kept getting dropped on Monica during Tribal Council. She obviously knows she’s on the bottom, and that she’s the odd one out. But no one likes to admit it, especially if they’re trying to play a game. Monica seemed flustered, and I actually thought she’d get voted out. But the tribe stuck to their plan and voted out Tina.

(There was ANOTHER vote for Tyson, according to Wikipedia this time from Katie. Tina voted Monica. How were those two not on the same page about who to vote for?)

This episode definitely suffered because TWO players were sent to Redemption Island, yet no one was actually eliminated from the game this week. I do not love what Redemption Island does to the game. What did you guys think?