This was a good week for Survivor, so let’s dive right in…

The Veterans’ team finally lost an Immunity Challenge, which shook up the game a little. I have Monica in my mom’s office pool, so while I wasn’t hoping they’d lose, it’s never that fun to watch one tribe get completely obliterated.

When the episode began, Hayden and Vytas were concerned about where Caleb’s big move at Tribal Council would leave them, Laura M. was awkwardly snuggling up to Aras, and Lauara B. was worried about still feeling like an outsider. Two of these things would come into play during the episode. 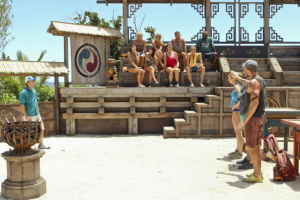 Redemption Island! For once, no one was cussing at Brad. I mean, these Culpeppers are so defensive but the man brings it on himself. He’s a loudmouh, and that’s all there is to it. Monica cried immediately when she saw him, offered to take his place and Brad, of course, wouldn’t hear of it. I wish Monica were tougher, or loved her husband less or something. It’s hurting my chances in the pool!

The challenge was to dissemble a crate, build a bridge, dissemble the bridge and use some of the planks to solve a puzzle. I perked up when I heard “puzzle”, hoping that meant Candace and John would obliterate Brad. But it was a rather simple puzzle, one a toddler could have solved. 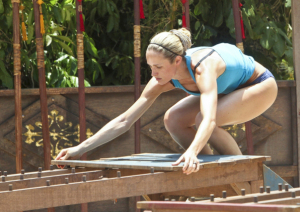 Candace was in last place when the bridges had been completed, and I was cheering for her loudly. That woman is a warrior. She lost, (John came first, Culpepper second – damn!) but she put in one heck of a fight on Redemption Island. I hate the RI twist, but I really wanted to see her re-enter the game. What a disappointment. I don’t care about John one way or another, and I’m definitely not rooting for Brad, so right now I don’t care who gets a second chance.

John chose to give the clue to Monica again, and before she was able to speak Brad barked “Throw it in the fire!” I wish John had tried giving it to someone else on the Veterans’ tribe, so it would shake up the game rather than getting tossed in the fire.

The biggest mistake Monica is making right now is appearing too close to her husband. Did I truly hear her say “We’re one person?” Nooooo! Even with her amped up alliance and strategy chatter, she’s coming across as too tied to her husband. That’s a threat.

In fact, being a single player in this game might just be an advantage. On the Newbies tribe, Caleb is not only the swing vote in that group of five, but doesn’t have Colton ready and waiting to drag him down. It’s a valuable position, which both Caleb and Vytas know.

Ick. Can we take a moment to discuss the abomination that is skincare on the Newbies’ tribe? Ciera is riddled with big bites. People have oozing cuts and scrapes. And, sweet Jesus on a breadstick, what is going on with Katie’s feet? Too much time was spent on the loss of her toenails, by which I mean NO TIME AT ALL SHOULD HAVE BEEN SPENT ON THE LOSS OF HER TOENAILS. The discomfort she is in is relevant to the show, but I could have done without the close-ups.

As an aside, don’t we all think Vytas should film an instructional yoga video in that exact location? Because I do.

Slides and Ring Toss, What Is This – A Children’s Birthday Party?

Going into the Immunity/Reward  Challenge, Ciera knew that there was a target on her back. It would be “the perfect time” for the Newbies to FINALLY win a challenge. Thanks to that heavy-handed foreshadowing, I knew Ciera would be safe. 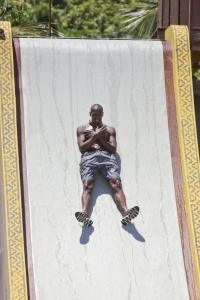 For the challenge, players had to go down an enormous slide and then successfully land a ring onto a structure. So, party games. Next week, will they play Pin The Tail On The Donkey in exachange for Immunity and some pizza? Get it together, Survivor. If you’re going to do joint Immunity and Reward Challenges, they shouldn’t be something I could complete at my neighborhood playground.

The first tribe to five would win, and the Newbies secured it. This is where I’d mutter something about it being a challenge that newborn babies could win, but, I won’t. Congratulations to them.

Their reward was a choice between fishing gear and steak/spices/a wok. Most teams would choose fishing gear if they did not already have it, but the Newbies chose steak. Really? Are they assuming that a merge will occur soon, and that then they’ll be able to benefit from the Veterans’ gear and skill? I think that choice was silly. Yes, perhaps I’d feel differently if I were starving and looking at a large, delicious steak. But several days of fish (however long until they merge) is better than one large meal that’s bound to make you sick.

Back at the Veterans’ camp, the vote seemed obvious – Laura B. was, and still is, an outsider. Her strategy was abysmal, as it essentially amounted to telling Kat that Monica and Laura M. were annoyed about not getting to participate in the challenge. But as Aras pointed out, “Easy votes are often the dumbest votes.”

Laura B. is an easy target, she can be taken out at any time. She has no friends in the game, and her loved one is out. She’s good in water challenges, but unlikely to win her way to the end. 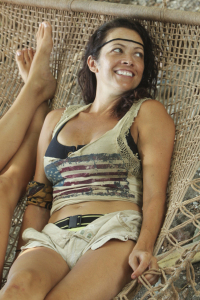 Aras wanted to vote out Laura M., who he believed would have a better chance at beating Brad on Redemption Island. (She is very good at puzzles.) Brad out of the game would make Monica a much bigger asset. As I said earlier, not having a loved one in this game can be a valuable thing. I think it would benefit Monica if Brad went home, so long as she held her emotions together.

Aras did not want to come across as a puppet-master, so we were left hanging as to which Laura would go home. But Aras is a rather convincing man, and I had a feeling it would be a Laura M. blindside. The poor dear, she really trusted him much more than she should have. Laura M. was voted out, and said nothing to her former tribemates on her way out.

(It was funny that Laura M. said that Laura B. had never felt the sting of getting voted out. Tina did, in All-Stars, but Aras has also never been voted out.)

Next week, the tribes get switched up! I often hate when they do this, because it makes all the early strategy and alliances feel moot. But with one tribe decimating the other, it might be a refreshing twist. We’ll see!

I may or may not be recapping next week’s episode. As you can see in the below post, I am officially on vacation! I’m getting married, eeeeeeeeeeeeeee.