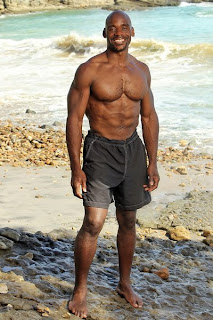 I’ve done a few of these Survivor interview conference calls now, and one thing continues to astound me – that NO ONE says they regretted a move or would have played something differently after seeing the show. Considering that almost everyone who’s been eliminated thus far on Survivor: Nicaragua dig their own graves, I thought at least one of them would recognize that. But no. Just like Jimmy T. last week, Tyrone didn’t see any problems with his behavior.
“I don’t think I should have stayed quiet,” he said. “There are always what ifs.” When it came to the lecture he gave the new kids when they arrived at the La Flor camp, he said he was just trying to be nice. “I was like the WalMart greeter,” he said. “I was trying to welcome them just like I’d welcome someone into my own home…you know, here’s the towels if you need them.”
And the chicken incident? Tyrone says it’s all in the editing. “I didn’t eat any more chicken than anybody else,” he said. “I made sure everyone ate, I ate after everyone…and I didn’t take all the chicken that was left.” He was surprised to find out when the episode aired that people had been upset with him. “If you look at it again what you see is Tyrone eating chicken bone and cartilage,” he said. “You didn’t see me eating like Fred Flinstone, having a big dinosaur leg or something. That was just presentation and perception.”
He said when he found out the tribes were going to be shuffled he thought “This is going to be interesting” but just went with the flow. “It was obvious that we [the older tribe] had more structure and organization,” he said. “We live for today and tomorrow, where as young folks just live for today.”
Tyrone said that he wasn’t worried about Marty being sent to the other tribe because “I don’t feel that Marty had control of the tribe.” When it came to Tyrone, Marty was not the puppet master. “It was portrayed that my vote [for Jimmy T.] was swayed based on a conversation with Marty, and nothing was further from the truth.” But from the beginning, he did think that Marty seemed crafty and would probably do well in the game.
As for his own disagreements with Jimmy T. during the barrel challenge, Tyrone said that he didn’t have a problem coming out of the challenge but the team had made a game plan before it began. “Of course it’s easy for you to say you would have nailed them all if you’d have done it,” Tyrone said about Jimmy T. “But you didn’t.”
If you watched the show, you probably know that Tyrone came across as a pretty funny guy – and he knew it too. “When people say stupid stuff, I’m going to give them a stupid face,” he said. “There was lots of funny stuff that didn’t make it on the show, but I am who I am. There were certain things I probably didn’t do because my audience there, my tribemates wouldn’t get what I said…One of the people didn’t even know who Beyoncé was!” (FYI, that was Wendy – she mentioned it during her interview with former Survivor contestant and podcaster extraordinaire Rob Cesternino.) 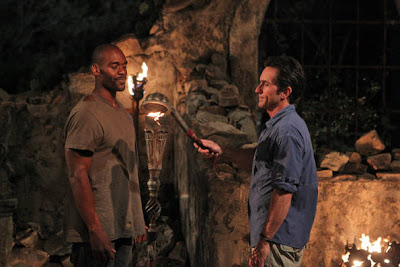 So here’s the thing. I liked Tyrone. I liked him in his pre-game interviews. He was my number one pick for the Survivor office pool. I liked him on the show, up until that last episode. And I liked him during this interview. He was friendly, funny and seemed like a really great guy. And then he said this: “My strategy in the game was my strategy in life: to be true to who I am. I wanted to do whatever possible to not lie to people and just to be straight-up and do what I need to do.”
NOOOOOO!!!!! No wonder he was voted out! People who come on Survivor to be “true” to themselves and promise not to lie hardly ever win. And when they do, they usually don’t deserve it. Tyrone seemed like a great guy, but man. He needed a better strategy.