Although I liked the Survivor: Nicaragua finale, I didn’t care much for this season and it showed in the live reunion show. It was kind of a dud, right? I expected more fireworks, more snark from Probst towards the quitters, and less singing. Much less singing.
Seriously, did we really need to waste time listening to Chase sing? 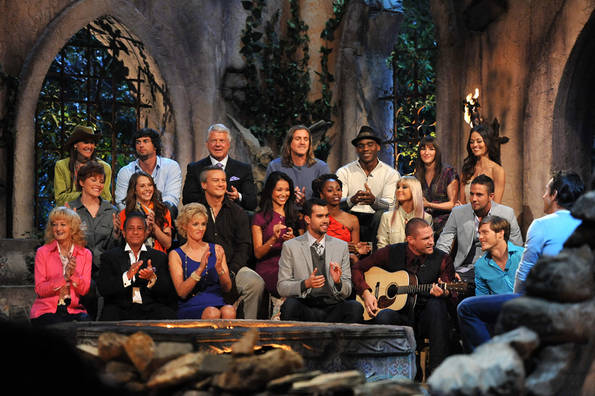 OK, let’s talk a little bit about how everyone looked, first. Seeing how everyone cleans up is one of my favorite parts of the reunion show. Special points go to Holly, who looked totally glamorous and completely different than she did on the show. Fabio looked great, and Sash looked very dapper. I loved Dan’s undone bow tie, but his skin was rivaling Snookie’s. Brenda looked fantastic, but that was no surprise. Jill also won a Most Improved prize. The Totally Bizarre Awards go to Wendy for her outfit, and Jimmy T. for that hair. I didn’t know it was possible to look even skeezier once off the show, but Jimmy T. showed me that it is. 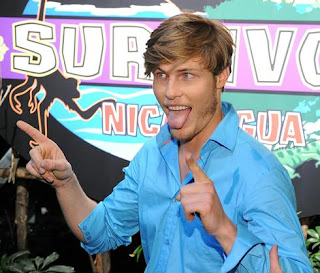 Now that I’ve got those judgments off my chest, let’s get down to business. I loved everything that came out of Fabio’s mouth. None of it made any sense whatsoever,  but the kid is just hilarious! I went to a small liberal arts college with a lot of philosophy students, and he just seems like someone I would have known there. As you know, I hated Chase’s performance. What a waste of time! And come on, is Survivor really in the business of extending contestants’ fifteen minutes of fame? Why not advertise Brenda’s paddle-boarding business or drum up some business for whatever Dan’s business is? (Seriously, though, does anyone else kind of feel like maybe it’s the mafia?)
I feel like anyone who read a pre-show or post-elimination interview with Jimmy Johnson knows that Survivor saved his life, but I get that they had to talk to him. I don’t get why they had to talk to  Terry Bradshaw. And for so long! What a waste of time. I was more interesting in playing Spot The Survivor in the audience around him. 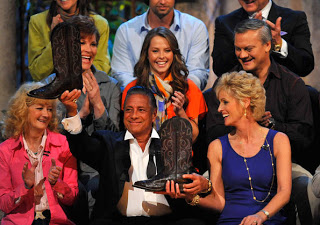 There were some highlights, though. Probst attempted to give Shannon a chance to apologize for his ridiculous “Are you gay?” comment, and instead cut him short when he started digging himself into a deeper hole. I liked how Probst kept control there. I also liked when he asked Marty “Did you fluff off Jane?” since she’d been using that term so much. Holly giving Dan a pair of ostrich cowboy boots was pretty cute too, and it was nice to see he was no longer holding a grudge.
I’m not a fan of the fact that Jane won the $100,000 for being the Fan Favorite, even though I knew she would. Did Probst even mention the top three vote-getters? I had predicted Jane, Fabio and Jimmy Johnson, but I wasn’t 100% sure about Jimmy. I was kind of hoping Fabio would take home the 100 G’s on top of the million.
Now, what do you guys think of the twist for next season? I was just so worried that it was going to be Rob vs. Russell (I don’t want to see the toothless troll on my TV ever again) that any other announcement would have been a relief. On the one hand, I think it could be a compelling new aspect of the show – two people battling it out on a separate island sounds good enough. On the other hand, I HATE the idea of someone who already got voted out taking home the million bucks. It’s why I didn’t like Survivor: Pearl Islands. The good news is that according to Survivor guru Dalton Ross over at EW.com, the upcoming cast gave off a much better vibe than the Nicaragua cast. So that’s something. Also, in Dalton’s interview with Jeff Probst (which you can read by following that earlier link) Probst points out that a crucial mistake in Pearl Islands was not being up front about the “Outcasts” reentering the game, and not subjecting them to the same conditions as the actual players. Those are decent points. On the other hand, I’m a little worried that screen time for the person on “Redemption Island” and the “duel” will take away from the reward challenges, immunity challenges, and tribal councils that I love. But I’m going to keep an open mind about the twist until we’ve seen it in action.