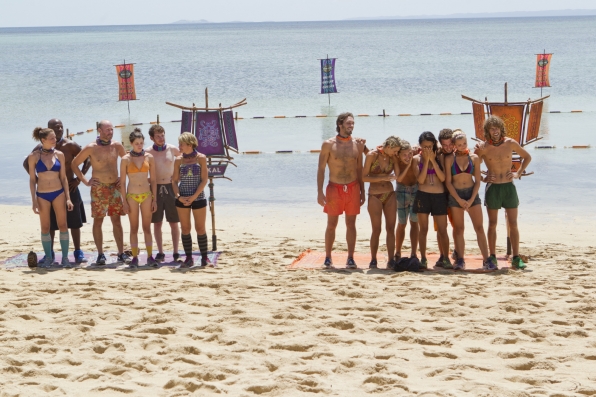 Survivor – She Made A Few “Foo Paws” This week’s episode of Survivor started off with Corinne and Phillip wanting one another out, and that rivalry pretty much dominated the episode. Corinne has never been my favorite character; in her first season she came across as more cruel than she seems this time, but she can still be a little bossy and arrogant. Of course, she has nothing on Phillip. He wins, hands down, in both the bossy and arrogant departments, and I absolutely prefer Corinne to him.

The problem with these past couple episodes is that the tribes were so uneven, so I’m glad they’ll be merging next week. That will definitely shake up the game and lead to some less predictable votes.

The Reward Challenge this week was pathetic. The tribe knew it would be physical, because it made reference to the strong carrying the weak. As Cochran noted, they could win if the challenge required weak players as there was no shortage of them on the purple tribe. It was a classic Survivor challenge where players had to run around a ring carrying bags of weight, until one tribe caught the other.

The problem with Phillip is, he doesn’t seem to be aware that he’s a fifty-something year-old fat-ish man. He is not a fast man. He has good aim and has performed well in some challenges so far, but he talked up his strength like he was James the Gravedigger (from Survivor seasons past, for newbies) or someone. It’s that arrogance that made the loss look all the more pathetic. Phillip was up against the likes of Erik, Malcolm, Reynold and Eddie. Those are four strong dudes, and they’re on a tribe with three strong women. There was no beating that team. Not only could Phillip not run himself, but he demanded that his tribe not run either… in a race. WTF? It was a moronic strategy, and the other tribe barely even had to try to beat them. They just sort of strolled along and then won a challenge.

The reward was coffee and baked goods, which everyone likely enjoyed for about twenty minutes before running awkwardly off into the woods.

There was a lot of activity at both of the camps this week when it came to the Favorites alliances, and it will be interesting to see where that goes next week.

Malcolm made what I think is a pretty smart move by approaching Reynold for an alliance. Malcolm is a smart dude and realized that three other people on his tribe – Reynold, Eddie and Erik – have the same problem he does. Once the merge hits, they will all be targets. He suggested an alliance to Reynold, who immediately went all in and spilled the beans about his Hidden Immunity Idol. Oh, Reynold. Amateur move. Malcolm proved he’s more than a pretty face by keeping his HII to himself.

I think this alliance is a good idea, it might behoove those guys to stick together. But an alliance of four cannot dominate a merged tribe of ten or twelve. The real test will be to see if Malcolm can keep this secret alliance under wraps until the time is right. They have two other fans to vote out before they get to the strong guys (Sherri and Michael) but the targets will certainly be on the backs of Reynold and Eddie. It might not be possible to Malcolm to keep them in the game without blowing his cover. Meanwhile, Phillip continued to bond with Julia over at the other camp. The only reason Phillip likes Julia is because she’s willing to sit there and listen to his crap, never saying a word herself. Cochran, once again peppering the episode with golden witticisms, said “I’m tempted to say she has a vanilla personality, but that would be doing a disservice to vanilla the flavor.”

Unfortunately for Julia, she made a “foo paw”, as Phllip would say it, by confiding in Dawn that she’ll work under Phillip of necessary but would rather help vote him out. Dawn told Phillip that they’d been talking, and Phillip was furious. Those weren’t her orders! She was already the worst double-agent! Temporarily, his anger was redirected away from Corinne. The Immunity Challenge was closer than the Reward was, but the stronger team still came out on top. Teams had to paddle a boat out to retrieve a heavy statue, then collect some key rings with a grappling hook. The purple tribe held their own with the boat, despite almost overturning it a few times, but Reynold was on fire with the grappling hook and Phillip couldn’t keep up. Another predictable win for the orange team.

I felt bad for Corinne, because she is a physically strong and obviously competitive person. You can tell she’s dying to win and putting in more effort than anyone, so even when she gets a little boasty I feel for her. I do not feel for Phillip.

Oh, Phillip. After the challenge, Mr. CIA “confessed” to Cochran that he’d thrown the challenge so that they could oust Julia before the merge. Suuuuure. Cochran nodded along, but later noted to the camera “I mean, it’s complete crap,” and “I think he’s actually convinced himself at this point that he threw the challenge.” Of course, Phillip was just trying to make excuses for losing the challenge during a task he’s normally good at. It was a grappling hook! “The spy’s basic tool!” (Another gem from Cochran. That kid was on fire this week.) The episode ended where it began: with Phillip and Corinne despising one another. Phillip wanted to split the votes between Julia and Michael in case one of them had a HII. Corinne wanted to just vote out Julia, so that Michael would continue to trust “them” (her). I see why Corinne wanted that, but I actually think Phillip was right here. Of course, his attitude about it was all wrong. As always. The favorites did split the vote, and on the second round Julia was sent packing. Oh Julia, we hardly knew ye. And we won’t remember you come the fallen comrades tribute.

This was a boring vote, but I expect the merge will really make things exciting. None of the favorites have strayed from their alliances, despite having differences, but they’re dying to. That leaves a lot of opportunities for the remaining fans to work their way up the ladder if they play their cards right. I already can’t wait for next Wednesday.

Take to the comments and tell me what you thought!