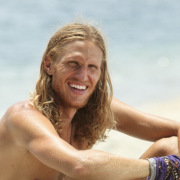 This week on Survivor, Tyson likened himself to “the Big Bad Wolf”. It’s not a bad comparison, considering he’s played puppet-master for most of this game. He’s made and betrayed alliances and engineered most of the big ousters of the season.

So if Tyson’s the Big Bad Wolf, what’s everyone else?

Well, I think Laura M. is the grandmother and Ciera is Little Red Riding Hood. This week was all about their mother and daughter relationship, and whether Ciera was willing to send Mama packing in order to get further in the game. Whether she could stomach it or not though, the Big Bad Wolf was ready to take a bite out of grandma.

Ciera and Laura were the only loved ones pair left in the game, so obviously a lot of the other players wanted them out. It’s interesting, looking at the final eight, to note how epically some people have screwed up. How did everyone else let that core alliance of four dudes get so strong? Why couldn’t the ladies have banded together last week to take one of them out? Now Tina is gone and it will be much more difficult – but not impossible.

The previews at the end of the show tonight suggested that Caleb will make a move against Tyson. I mean, c’mon guys – it was only a matter of time before someone tried to topple the kingpin, right? Like I said, I can’t believe it took this long. But can Caleb do it? I don’t know, but I have the distinct feeling that the Big Bad Wolf ain’t gonna make it to the final three.

Now, onto the show. 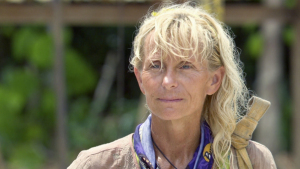 I wanted Vytas to survive on Redemption Island this week because my husband has him in the office pool. It’s pretty awkward to root against someone when you sit next to them on the couch. But emotionally, I was rooting for Tina. She’s just a cool older lady up against two yoga-lovin’ bros. 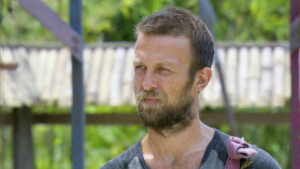 The challenge was to retrieve some bags with grappling hooks, and then use a ball inside one of the bags to complete a table maze. My girl Tina KILLED IT with the hooks and was nailing the puzzle when, at the last minute, she lost it and her ball dropped to the ground. Ouch – I felt for her on that one, she was so close! Vytas took the 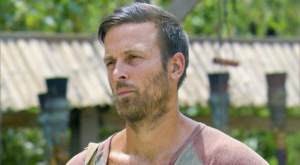 lead and was first to win. But Aras, for all his strengths, sucked at table mazes and Tina managed to snag second place. Everyone wins! Well, everyone except Aras. He became the first member of the jury. 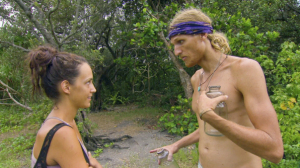 (Am I on to a Goldilocks analogy now? Because Tyson is obviously Goldilocks.) Back at camp, Tyson told the guys that they’d all vote Laura to break up the last pair – but that they wouldn’t tell Ciera so that she wouldn’t have to vote for her mom. It was interesting that Tyson later decided to tell Ciera the plan – I assume he figured she’d be 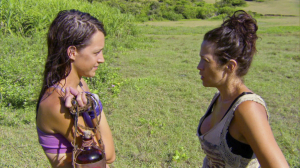 less pissed if she knew in advance.

This episode had one too many heartfelt conversations for my taste. First it was the mushy brotherly crap with Aras and Vytas. Then Laura cried over how Ciera is a big girl now because she wants to vote Mommy out of Survivor. Uggghh, suck it up, princesses.

At Redemption Island, Vytas had given the Hidden Immunity Idol clue to Katie. And for once, it didn’t get tossed in the fire. Katie wisely accepted the clue and tried to find the Idol – even with Laura tailing her in the wee hours of the morning. Unfortunately, we all know that Tyson still has the Idol so Katie’s efforts were in vain. 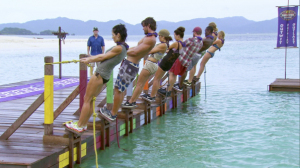 For the combined Immunity and Reward (I miss when these were separate challenges…), players had to hold onto ropes as they were lowered towards the water at an angle. This challenge tends to favor slimmer players, but ones with upper body strength. So not big dudes like Hayden, Caleb and Gervase – they all fell quickly. But also not players like Ciera and Katie. Yes, I easily predicted that Tyson, Laura and Monica would do well in this challenge.

Monica won! That’s my girl. Not only was I happy to be safe in the office pool for another week, but I was impressed to see Monica take home another individual immunity win. You know, “you go, girl!” and all that.

Monica’s reward was a feast of hotdogs, cheeseburgers and fries. Probst told her to pick a friend, and odds are she would also have been told to choose a second friend. But instead, Monica said she wanted to give up her reward to give it to all seven other players.

I mean, y’know…that wasn’t really one of the options, Probst. In some ways Monica got let off the hook here, not having to play favorites. But on the other hand, gestures of good will like this can often place a target on your back. Political move or not, no good deed on Survivor goes unpunished. It will be interesting to see if down the road, Monica is viewed as a threat for pandering to the jury. (Though I doubt anyone has ever based their million-dollar vote on “I owe you for that hotdog”.)

Back at camp, Ciera started to panic – Monica having immunity and Katie possibly having an Idol meant her mama was about to hit the road. So she came up with a plan to suggest voting Katie out instead. Actually, this part of the plan wasn’t bad: Ciera told Katie that everyone was voting Laura. Katie said she’d play the Idol anyway, just in case. Ciera said you’re lying, you can’t have the Idol because I have the Idol. And Katie believed her, just like that. Easy as pie.

The problem was, Tyson didn’t care – he wanted Laura out. There was a bit of last minute scrambling (Caleb, for one, wanted to oust Katie first) but in the end the vote was unanimous – everyone voted for Laura, even her daughter.

Ciera talked tough all along, but when the chips were down she did attempt to save her mom. Will that hurt her game in the long run? I thought it made her look a little untrustworthy.

Not a bad episode, right guys? I’m glad that weak “alliance of seven” has fallen apart, because it was always really an alliance of four with a few hangers-on. I mean, come on – an alliance of seven in a tribe of eight is just a betrayal waiting to happen. I hope someone makes a big move next week, because seven players left in the game is usually a good time to do it.