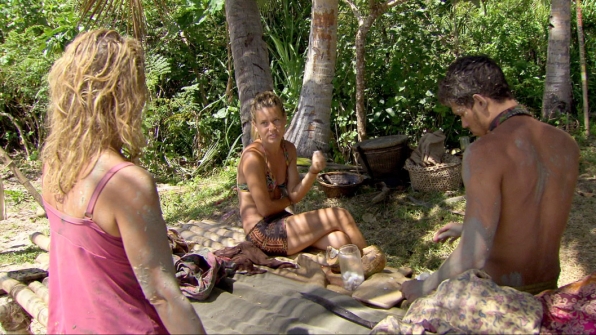 Bam! Wowza! Yeehaw! These are all incredibly cheesy words that can’t even begin to express my excitement over last night’s episode of Survivor. This season started out strong and just Keeps. Getting. Better.

If you’ve seen it, click on through for a full recap, and then head down to the comments and tell me what you thought of everything.

This episode was all about Lisa and Skupin in their positions as the swing votes, and I’ve got to say, I’m pretty disappointed in Lisa. I was so proud of her last week for attempting a big move, but then she returned to camp full of guilt, doubt and regret. Why? Lisa is a huge fan of this game and she obviously knows how it should be played. She is intelligent enough to play well. She’s letting her heart get in the way, but the people she’d be betraying aren’t even nice to her! In my book, anything goes on Survivor, including backstabbing your pals. But backstabbing the people who’ve been cruel to you for weeks? On Survivor, that should be easy for even the nicest of players.

It was funny to watch Penner realize that his anger-vote for Abi had screwed things up a little, but it wasn’t a bad thing that Kent went home and Penner’s vote would have only resulted in a tie. Now his mission was to pull Skupin and Lisa over to his alliance, and I think he did a stellar job.

The Facts of Survivor

Penner had a few heart-to-hearts with Lisa over the course of this episode. Early in the episode, they talked about her career as a child actor, her need to be liked, and how that’s affecting her game – and her life. It was a little too kumbaya for my small, black heart, but I knew that behind Penner’s kind words was strategy. He could be completely genuine in what he said, but his words were also strategic. He wanted Lisa to break away from her need to be seen in a good light and make the best move for the game.

Later, his speech about storytelling was brilliant. Just brilliant. He completely laid out how the season would be painted, which is impressive considering they were in the middle of filming. So often, you hear people say that they got a bad edit. It’s because in the moment, they think they’re doing the right thing or playing a good game. They don’t know what  the story of the season will be. But Penner knows, because he’s smart and he’s a writer. He knew what kind of character Lisa would be and he knew what kind of characters Pete and Abi would be. He knew the audience would root for Lisa to leave them in the dust. It was genius, and I was pretty sure he had her convinced. Alas, he didn’t.

I’ve gotten way ahead of myself, so let’s talk about the challenges before moving on to Tribal Council. Both were really great this week, again.

In the Reward Challenge, two teams had to move through an obstacle course and then get twelve balls into the net. The teams picked themselves, and no one chose Abi. It gave me great joy to watch that selfish little brat have to sit out, with no chance of experiencing the reward. The teams felt a little uneven to me, but if it was a schoolyard pick then it was their own fault. The strongest four people in the competition right now are Malcolm, Pete, Denise and Carter – and three of them ended up on one tribe.

On top of a slight advantage in strength and speed, Penner’s intelligence helped give his tribe a huge lead. Digging up those bags of balls all in one shot allowed everyone to move through the course much quicker. Figuring out their were each buried in a corner was good, but not having to have each player check each corner until he/she found one was amazing.

Skupin’s team made a good comeback towards the end, but the red team had too huge a lead. Malcolm, Denise, Carter and Penner got to take part in the coolest reward yet – delivering toys to a nearby village and getting to take part in a big feast. The food looked amazing, and that would be a unique cultural experience you’d never forget.

The Immunity Challenge looked really difficult, but Skupin won it by a mile. I wonder how long it would have taken had he not been participating. Balancing those balls in the indentations without dropping the ones already balanced looked really difficult. I was rooting for Penner to take it again, but I was glad to see Skupin win as well, since he’s my mom’s chance to finally win the Survivor office pool.

And so it came down to the decisions Skupin and Lisa had to make, which I’ve mostly already discussed. Only one of them needed to flip, but Skupin didn’t want to make the move without Lisa. I still can’t believe how much Lisa agonized over the decision, and that she ultimately stayed true to those awful, awful people. Even this week, knowing that she needed her, Abi was incredibly rude to Lisa. Lisa had absolutely no reason to stay loyal to them. And yet…

Denise suggested everyone vote or Artis, because they were pretty sure Abi wouldn’t give him the Hidden Immunity Idol. In fact, those people felt to confident – so arrogant – that no one played the Idol. And it came back to bite them. Lisa did not flip, despite Abi publicly calling her out during Tribal Council. But Skupin did, and that was all it took. Artis was voted out. I was impressed with his exit speech, which was full of admiration rather than bitterness. He took it all in stride and was happy to have played. I kind of wish we’d been able to see Artis play with other people, maybe he would have come across as a nicer guy without the poison known as Abi-Maria around.

And before I go, I need to point out that even on the jury, sitting silently, I hated Jeff Kent. That guy is just an obnoxious dude. What was that glowering look he gave everyone? Move on, buddy! Go wipe your tears with hundred dollar bills!

OK, it looks like the balance of power has been restored to the side of good! Our pals Malcolm and Denise are in a fantastic spot now, one that seemed unimaginable back when their tribe was losing every single week. And the blue-eyed devil Penner has managed to live to see another day. I won’t be completely happy until Abi is gone, but this is certainly a start. Another edge-of-your-seat episode in the books! What did you guys think?