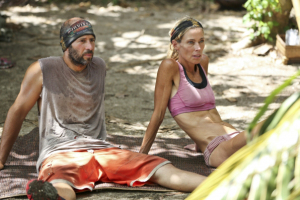 Is the weight loss messing with Trish’s head?

“I still trust Tony,” Trish said. She said this after returning from a Tribal Council where Tony made a big, game-changing move without consulting the majority of his “alliance”.

If that didn’t break her trust, what will? The way that Tony has been able to control this game has been astounding. I don’t think he’s a good player, I just think the others are worse. When will it ever end?

Not any time soon. Tony came out of tonight’s vote on top, and he has a super-special Hidden Immunity Idol in his “bag of tricks” to boot. I hope he chokes on his bag of tricks! Man, this guy bugs me.

Tony could play a good game, if he dialed it back just a little. As my mom said in the comments last week, he’s always at 11. The guy made a “spy shack” so he could eavesdrop on strategy conversations near the well. And it worked – but why was he surprised to overhear that Jefra doesn’t trust him? If he wanted Jefra to trust him, he should have clued her in on that last vote. This guy’s arrogance really gets to me.

The Reward Challenge looked like maybe it was meant for earlier in the season – did anyone else notice the tribe names painted on the side of the boats? I assume rough waters interfered or something. For the reward, each team had to collect paddles and then solve a word puzzle. 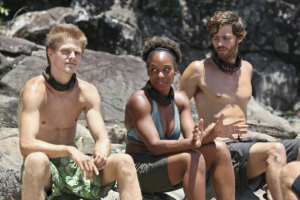 These three found themselves in a tough spot.

Spencer, Tasha, Jeremiah and Jefra won – an ideal combination, since those three needed to swing players to their side and Jefra was the easiest target. They enjoyed a BBQ and casually brought up strategy. At first Jefra was non-committal, but after reading a letter from her mom encouraging her to play a cutthroat game, Jefra shook hands on a final four deal.

Pfffffft. It only took her what, a day to break that? 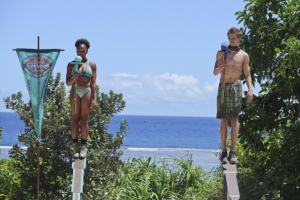 Tasha’s unbeatable when it comes to challenges like this!

Back at camp, Trish pressed Jefra on why she was so glum. Jefra didn’t hold back – itwas all about Tony and her position in the alliance. So Trish “confronted” Tony, who was offended to be considered untrustworthy even though he voted out an alliance member without consulting them. Jefra decided to stick with him and her original alliance, and told Jeremiah that she was going back on their arrangement.

I wanted Jefra to go with Spencer, Tasha and Jeremiah because I like them better. I don’t think she would have won. But I don’t think Jefra can win in her current alliance either. At least jumping ship would have given her something to say at Tribal Council, a “big move” to talk about. If she made the final three, I’d be surprised to see her get a single vote. 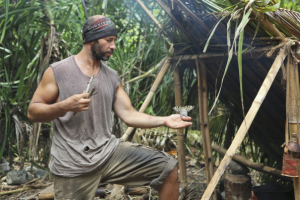 To make matters worse, Tony found the special Hidden Immunity Idol. I mean, I will give credit where it’s due – Tony is always thinking, scheming, playing. He found it fair and square. But…but…but… I just don’t like him! His style of game play is too manic, arrogant and impulsive. I also hate this new Hidden Immunity Idol concept. It can be played after the votes have been read? There’s no strategy, risk or luck involved – it’s just a get out of jail free card. Now we’ll never get rid of Tony!

Spencer advised Tasha and Jeremiah to vote for Woo, but it would all come down to who he played his own Idol for – himself or Jeremiah? Kass suspected that Spencer had it, but Spencer didn’t know that. It was a tough choice. Spencer ended up playing it for himself, and I understand why. It would suck to get voted out of the game after playing your Idol for someone else. But man oh man, was I hoping this vote would work out in their favor.

Jeremiah was voted out. My mom has lost the office pool yet again. Tony bragged about his “bag of tricks” during Tribal Council. EVERYTHING IS AWFUL. I hope Spencer and Tasha manage to stick around next week.