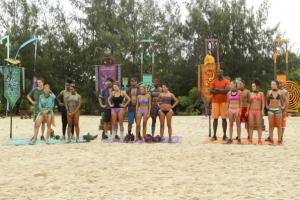 And we’re back! This week I found out who I got in the office Survivor pool and, guys, it could have gone better. *drumroll please* I have Spencer. Now, I did get drawn out of the hat pretty late and many good players were taken.

But I had him ranked at #4 on my list, because I guess I thought he could bounce back from episode one? Looking back, this was a serious mental lapse.

In my defense, I was trying out a new strategy this year. I usually place players I personally hate, and players that start out weak, at the bottom of the list. And so often they end up making it to the end! So this time, I tried to put some players that I didn’t care for and don’t think will win (like Spencer and J’Tia) a little higher up. We’ll see how this pans out.

In case you’re interested, my husband got Sarah (his top pick) my sister got Woo (her top pick, and the top pick of many) and my mom got Jeremiah.

If you’re up to date on this season of Survivor, click through for a recap of the show. 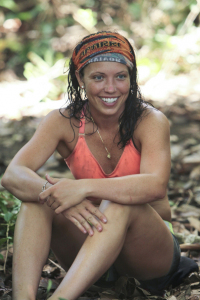 When the episode began, Tony approached Sarah privately and gave her the truth about being a cop. I expected her to react with anger or distrust – after all, he repeatedly lied to her face last week. But instead, she went on and on about a “blue blood” bond.

To make things even worse, Sarah totally bought Tony’s lies about Cliff and Lindsey conspiring against her. Oof. I guess Sarah is great at spotting cops, but not so hot at spotting the dirty ones. If only she’d been allowed to bring her trusty polygraph as a luxury item! 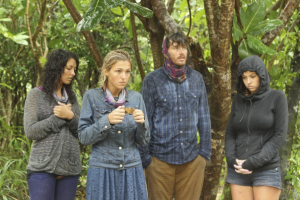 The rain really set in this week, and the elements got to a few people. I noticed Lindsey and Jefra looking pretty down in the dumps in particular. LJ noted that the beauties on his tribe were living up to their stereotype – a few of them spent too much time whining and not enough time trying to improve their shelter. LJ also found the Hidden Immunity Idol this week, after going to look in the area where he’d caught Morgan on Day One.

This guy is looking like a pretty strong player so far (I had him up very high on my office pool list.) He’s on the Beauty tribe, but has Brains and Brawn as well.

Challenge time! Thanks to

Tree Mail, everyone knew that the challenge would involve throwing water to one another. So Tasha wanted everyone in her tribe to practice in advance, using coconuts or whatever. It was, I guess, an industrious idea. But it mostly made them look silly. 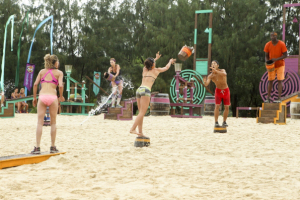 At the challenge, all that practice counted for nothing. The Brains tribe totally blew the water portion of the challenge, and moved on to the second phase – a cool vertical maze – in dead last. Beauty actually nailed the water stuff, but they lost their lead on the maze – Brawn handily came in first place.

In the comeback of the century, the Brains tribe finally lived up to their name and finished the maze! No Tribal Council for them this week, and I breathed a sigh of relief. It wasn’t looking good for Spencer if they lost.

Brawn won Immunity, a tarp and some comfort items while Brains won Immunity and a tarp. I hate having three tribes. It just makes this stuff less exciting.

Back at camp, Tony found a clue to the Hidden Immunity Idol in with their comfort items – he was the only person on the tribe who thought to look for it, and he already has the Idol. Sigh. This guy. I don’t like him, and it bothers me that he’s doing well. 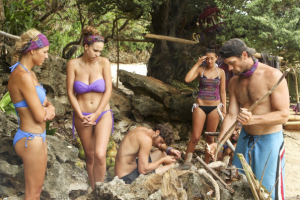 Back at the Beauty camp, alliances began to reveal themselves. We knew last week that LJ, Jeremiah, Jefra and Alexis were close. We didn’t know that Jeremiah had also been talking strategy with Brice and Morgan. So he was in the middle – should he vote Brice, or should he vote Alexis?

It only made sense for Jeremiah to vote for Alexis if he had a fourth person onboard, and Jefra was not into the idea. In fact, Jefra seems to understand very little about the game in general. Jeremiah should probably keep her as far away from strategy as he can, and should just tell her how to vote.

Everyone ended up splitting the vote, because they were concerned about the Hidden Immunity Idol. On the second vote, Brice was sent home (but not before pulling some epic bitchfaces during Tribal Council). It’s too bad, because I liked Brice’s sense of humor and I think he could have done well if the cards had fallen a different way.