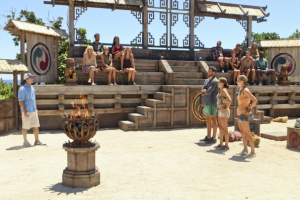 This week’s episode of Survivor was a little slow, but it has set us up for a  very interesting second half of the season. Promotions for this episode set it up as “an ultimatum is issued at Redemption Island”, but I don’t think that really happened, did it? Let’s get to it – click through if you’ve seen the episode.

When Kat arrived at Redemption Island with John and Laura M., her summary of what happened was rather different than what we saw transpire last week. It’s amazing how people can delude themselves – Kat never really admitted that she targeted Monica. That’s what got her voted out, plain and simple. The next morning she was a puddle of tears, sobbing over whether her boyfriend would still like her now that she’d been eliminated.

Kat can be such a child.

Kat was crying when 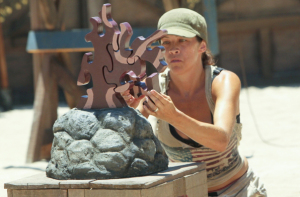 she got to the Truel, and she immediately said that she’d like to switch – especially because the challenge was a puzzle “and I can’t even spell.” I mean, no arguments there. Buy Hayden asked her what would be best for them in the long term. Obviously, they both know that Hayden has a much better chance of winning the game than Kat. But I think it was the mere mention of “long term” that convinced Kat to perform in the challenge. She’s more concerned with the longevity of her relationship than with the game.

The puzzle was difficult, but John slayed it. Kat actually didn’t perform too poorly, and Laura M. was weaker than I expected. In the end though, she came second and Kat was sent home.

Tie Your Brother Down 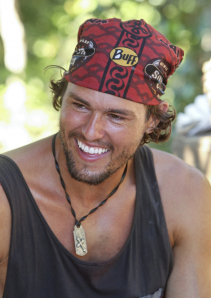 Back at camp, Hayden made a smooth transition from “I feel bad that I didn’t help Kat when I could have” to “Gee, with Kat out of the game my odds of winning have increased tremendously!” He couldn’t hide the glee. There’s a true player.

Kat’s elimination meant that Aras is now the only person on his tribe with a loved one left in the game. (Ciera’s mom, Laura, is still on Redemption Island, but she barely counts as a tribe member. They discuss strategy in front of her as though she doesn’t exist.) Aras is mistakenly viewing that as an advantage, telling his pals that Vytas will definitely side with them come the merge. But he was too busy off meditating to realize that the lone wolves 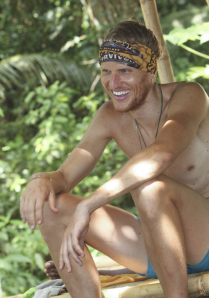 had teamed up against them. No literally – Aras was meditating on a mountaintop while Tyson was letting everyone know that the Baskauskas brothers are the targets.

Over at the other camp, Vytas had all the women in the tribe wrapped around his little finger. Telling stories about lending money to strangers got that guy WAY too far, these ladies need to toughen up. Tina has high hopes of Vytas marrying Katie (looks unlikely…) and I think Laura B. would pack up and leave Rupert if asked (the most unlikely.)

The challenge was a pretty cool obstacle course, with all the tribemates navigating it at the same time, while chained together. But it was too short, and the tribes finished at virtually the same time. One player had to assemble bolos, and then get them hooked onto a ladder – bo-ring. Tyson and Tina faced off, with Tyson coming out on top.

Obviously, Vytas was a target. But then the tribe got back to camp, Laura B. made an executive decision to tell Vytas that a blindside wouldn’t be fair, and the women had already agreed that he would be voted out. Bad. Move. Why would she EVER think that was something she should say before discussing it with her alliance? It immediately put everyone else on edge.

However, even with Laura B.’s unwise and unpredictable move, Vytas was still the bigger threat. As Hayden said, “What’s better in the long term?” A merge is obviously coming up, and I thought the smarter move was still to eliminate Vytas and just try and rein Laura B. in. Tina wasn’t sure, so she played both sides and told Vytas that Laura B. would be going home. Honestly, I felt he got a little too cocky about everything. Once Vytas said that women NEED an alpha-male to keep around, I was rooting for his demise.

Unfortunately, the women were wooed by Vytas’s smooth talk and shaken by Laura B.’s unrehearsed outburst. They voted to keep him and eject her. Bad move! Get ready to see the Brothers Baskauskas reunited, ladies.

Next week: Someone returns from Redemption Island, and the tribes merge! This week’s episode was slow, but I’m looking forward to the drama that awaits. The final Truel will be an endurance challenge, and I’m surprised to find myself rooting for Laura M. What about you guys?

It will be interesting to see what happens with the merge. I expect everyone to try and break up Aras and Vytas, which is why I’m surprised that Tina allowed Vytas to stick around this week. But she better watch her back, considering she also has a loved one left in the game.