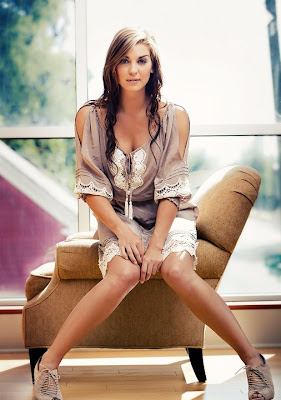 You guys had a lot to say about last week’s episode of Sweet Home Alabama, so Paige took some time to chat with me today about the show. Obviously, I had to start by asking her about her date with Jeremiah!

Paige said she wanted to take Jeremiah to the vet’s office because the little chocolate lab puppies were so cute, and because Jeremiah had told her his dog was hit by a milk truck. “I wanted to show him a little of what I do, like he showed me with the combine. Then we went back to where I live and just talked. He doesn’t really open up when the cameras are around,” Paige said.

Paige said the date was “intense” and that she asked Jeremiah a lot of questions because she wanted him to open up. “I said I think I’m falling in love with you, and he didn’t reciprocate it, so that was hard. He asked if I meant it and I said yes, and he said his heart was beating so fast and he was scared.”

And then the date was over – the producers of the show separate them, and they’re not allowed to talk or anything while the cameras aren’t on.

As for the gym, Paige said no, none of the guys knew she was going to be there. “I was walking up and they [the producers] told me ‘They don’t know you’re coming, it’s going to be a surprise’ and I thought that would be funny since they’d probably be working out and be all sweaty. We girls got to go to the gym too, usually a couple times a week, and it’s one of the only times you get to leave the house. So it probably just seemed like one of those regular outings.”

As for the fight, Paige said she heard lots about it. “The guys would always tell me and joke about it. You know, when you’re on a date you talk about what’s going on in your life so I’d always ask how things are going, or what did you do last night. And they’d say, ‘Oh, a fight broke out last night!’ They’re like brothers and can laugh it off.”

“And you know, it’s inevitable. There are different personalities and no phone or Internet, they’re all dating the same girl and feelings are developing. The girls would just cry every night, instead of fighting they’d go into their rooms and cry. You can’t talk to the other people in the house about it because they also have feelings for this person.”

Paige says she was told the fight we saw actually happened after elimination, so on top of being worked up about their date Jeremiah was also upset that Donny, his best friend in the house, had gone home.

“What I heard was a whole fight broke out in the house which they didn’t show, everyone was screaming and someone spit on someone else. If you throw a punch you get kicked out, but there was nothing they could do…and they had given him [Jeremiah] three glasses of whiskey and then he was caught at a bad moment.”

Paige said she didn’t have a chance to talk to Jeremiah at elimination, so at this point in the show she has “no idea what’s going on in his head.”

“I was really upset at elimination, everything was just getting to me. I didn’t talk to the guys long because I was on the verge of tears and I didn’t want to cry in front of them. So I only talked to the ones I brought in to see me.”

Paige wondered if maybe she’d scared Jeremiah away. “My daddy always says ‘Don’t chase a guy or he’ll run away from you’ and I was asking him all these questions…I just thought, good grief, I seem like a crazy girl.”

This week, Paige says, we can look forward to her and Big Shaun going on a date that’s “taking him way out of his element. We’re going to a dark and dirty place. He won’t have his hairspray!”