That title is a Friday Night Lights reference, FYI.

So. The second last episode of Sweet Home Alabama aired on Friday night (and is already available at CMT.com!) and it was an important one. Tribble spent one-on-one time with all four girls, they met his parents, and then he sent two of them home. He made the choices I expected, but I was still a little disappointed.

The one-on-ones obviously all took place in the same afternoon, so it looked like all Tribble did was down sweet tea from a mason jar and talk about his feelings all day. I can get behind one of those activities – although I hope there was a restroom nearby.


Seriously though, it must have been exhausting to devote himself fully to each girl as they hung out under a tree, on a porch, etc. The girls knew this might be their last chance to show Tribble how much they care about him, so it was time to “open up” and “let their guards down” and other cliched but necessary things. 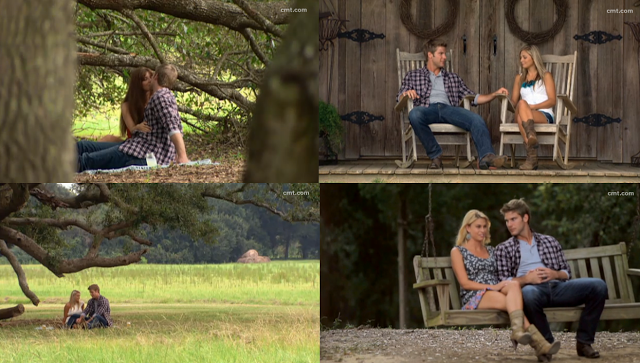 First Tribble and Jackie spent time together, and unfortunately it became obvious that not only would she be in the final two, but she could easily win this whole thing. It was so clear that these two are really into each other. And she’s so boring! She reminds me of Kim Kardashian. Always very glamorous, always very sweet and soft spoken, and you kind of just want to cut her hair, wipe off her eyeliner (and I love eyeliner!) and get her to laugh really loudly. (Only I want to cut Jackie’s hair because it bugs me, and I want to cut Kim K’s hair so I can use it for a wig or sell it on eBay and go on a vacation with the money.)

Next Tribble hung out with Courtney, which was a total 180. Why can’t Courtney wear something that’s not a tank top, daisy dukes and cowboy boots? Doesn’t she own any cute floral dresses like the rest of the Southern girls? Whereas Jackie comes off as kind of sophisticated in a really contrived way (as though she moved to New York when she was 22 and decided not to bring anything but heels) Courtney always strikes me as very young. Her connection with Tribble just didn’t seem as deep, and she was the only girl of the four that I knew wouldn’t be making the final two.

Next Tribble spent a little time with my favorite, Cassie. I can’t quite explain why I’ve liked Cassie so much on this show. It’s not just that she’s gorgeous. It’s little things, like how she said she was relieved when the girls had to clean up the house in preparation for Tribble’s parents to visit because it was about time people picked up after themselves. It’s something I would probably have thought. And when she told Tribble that falling for him had made her realize that she didn’t need to tell herself she could just go through life independently, it was also something I could relate to. She wasn’t being overly mushy or forced, just honest. She also seemed well-liked by the other girls and seemed like she was careful to avoid a lot of the drama inside the house. So I’ve been rooting for Cassie. Her private date with Tribble had been a while ago and I was worried that she wouldn’t stand a chance against the girls who’d had more recent dates. But when she hung out with Tribble, I thought they seemed like such a good fit.

Last was Tristan, who opened up some more to Tribble about the recent death of her father. And with that, I was pretty sure she’d join Jackie in the final two. Are you ready to think I’m a horrible person? OK, here goes – if The Bachelor has taught me anything (it hasn’t though, really) it’s that you can’t beat the personal trauma card. Whether you battled a disease (like mold), got into a car accident or lost a parent, sharing that personal tragedy always cements a bond between two people. Which means if you don’t have a personal tragedy to share, it’s tough to compete. It’s just how it is.

The thing is, Cassie seems like a better fit for Tribble. She seems like she’s at the same place in her life, while Tristan is still in school. So I was really hoping Tribble would surprise me and keep Cassie around.

Tribble’s parents came to meet the girls, and they were just delightful. Unfortunately they didn’t dig up any dirt on anyone using Google like Devin’s dad did last time, but they had fun senses of humor and chatted up all the girls. 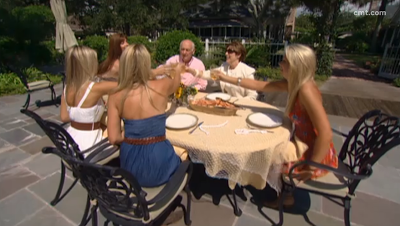 It’s interesting to watch the country girls slowly turn on Jackie. Part of it, I’m sure, is that they all want to see Tribble end up with a country girl. But you can also see how they’d be annoyed by Jackie. She did talk a lot during lunch, and fair enough – she wanted to make an impression on Tribble’s parents. But I also think the other girls have started to see through her sweet facade.

After talking one-on-one with all the ladies, Tribble’s parents deemed them all “10s”, wished they had four sons to set them up with, and told Tribble to pray. So not a lot of advice. Thanks for comin’ out, folks! 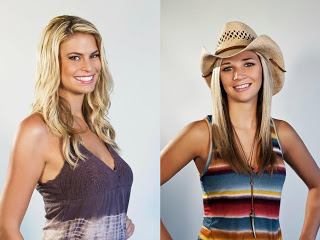 Hardest elimination yet? Probably pretty close. Tribble told the girls to come talk to him in any order and Courtney volunteered to go first. Predictably, Tribble was sending her home. She took it like a true Southern belle – seriously, the girls on this show are so much classier than the ones on The Bachelor. I think if someone cursed at the camera and said “He doesn’t know what he’s missing!” they’d get kicked out of Alabama.

Next Jackie went, and Tribble asked her to stay. Sigh. I really think he might choose her next week, guys. How are we all going to react to that? Will I ever be able to trust televised dating shows again?

So it was down to Tristan and Cassie, and you know my feelings on this. I like both girls a lot, but I really thought in the long run Cassie seemed like the best fit for Tribble. He kept Tristan instead, and said goodbye to Cassie. (Another classy exit – good job, girls.) So is it safe to say we all want Cassie for Sweet Home Alabama season three? Right? Right! She’ll be great at it. 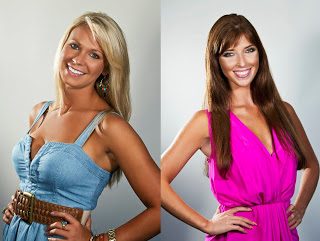 So we’re down to the final two! Obviously, at this point I’m rooting for Tristan. She seems like a sweet person, but also a really fun girl. Is anyone rooting for Jackie? Anyone? Bueller? Let me know in the comments, and see you back here next week to dish about the finale!