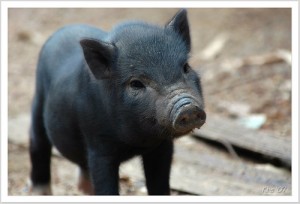 Everyone is talking about the swine flu right now. It’s the big pandemic scare of 2009. Google is even tracking its progress around the world using this map.

Now, I’m not making light of the situation but with the proliferation of social media tools like Twitter, it’s just as easy to spread helpful information around the world as it is to spread some pretty crazy misinformation.

So, when @jennbelle overhears a woman say “Call me overcautious but no bacon, I don’t want to risk swine flu”, we may poke fun but where there’s one woman thinking that, there are surely others.

Let’s get some facts—or at least one fact—straight here: swine flu, or any flu for that matter, is not transmitted through the consumption of the object used to describe the type of flu. That’s right, ladies and gentlemen. You can’t catch this new strain of flu by eating pork products. You couldn’t catch bird flu by eating poultry. Heck, you can’t even spontaneously start speaking Spanish by catching Spanish influenza.

I understand that sometimes we have these moments where we say things without thinking them through, but this is a fear that many people have. Like the avian bird flu scare before, carnivores across North America and perhaps even around the world will be opting for other meats in the weeks and months to come. They might even switch back to eating more poultry now that there’s no such thing as avian flu anymore (or at least it’s fallen from the headlines). I’m not urging people to continue to eat meat but what I am calling for is a little bit of reason here. How do you think people contract regular human flus? Through cannibalism? No. So, why would it be different with animals?

The only way it could be foreseeable for one to contract an animal-related flu through the consumption of said creature is if one were eating at The Restaurant at the End of the Universe (aka Milliways) and the Ameglian Major Cow you just conversed with sneezed on you.

In the wise words of Douglas Adams: DON’T PANIC!

As a side note, mark your calendars! May 25 is Towel Day, a tribute to Douglas Adams.

Swine flu and the wisdom of Douglas Adams
https://haligonia.ca/swine-flu-and-the-wisdom-of-douglas-adams-1892/