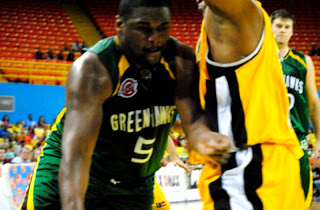 A few weeks back, I had a chance to do a Q and A with Daniel Artest (who at the time, was playing for the PBL’s Maryland Greenhawks), I planned on posting the interview closer to the date when the Rainmen faced off against Maryland.  But to my surprise last week, I came to find out that Daniel and the Greenhawks had parted ways.  Regardless, it was a good interview and Daniel was a kind enough to participate.

Some call him the “Second Artest” but Daniel Artest is his own man, he’s his own ballplayer.  He’s an undersized big man, 6’5″, 290 lbs who’s made his way through the minor leagues, not only has he played in the PBL but he’s also played in both the ABA and also overseas.  He also had the chance to participate in the Sacramento Kings Summer League squad back in 2007.  While Artest was with the Greenhawks, he averaged 8.0 pts, 5.6 rebounds in five games.  He’s originally from Queensbridge in NY and has a connection with a lot of the New Yorkers on the Halifax Rainmen roster.  I had the chance to ask Daniel his thoughts on the PBL, the influence of his older brother on his game and his favourite San Antonio Spurs of all-time.
__________

Romy (Haligonia.ca): You’ve had experience with both the ABA and PBL.  For all the Halifax fans who are unfamiliar with the Premier Basketball League, how does the PBL rank in skill level amongst the various minor leagues?

Daniel Artest:  The level of the PBL is better than the ABA honestly. lol..but it’s not as good as the D-League. Hopefully it can get to that level but in order for that to happen teams must be willing to spend money to bring in that caliber of players in.

Romy (Haligonia.ca): You play for the Maryland Greenhawks which is dubbed “The First Green Professional Sports Team”, what is the meaning behind the slogan?

Daniel Artest: It’s about recycling really. I feel as if there’s only two seasons. Hot and cold. No more winter, spring, summer, fall. I’m glad to be apart of the first pro basketball that went green. I feel like if I can spread the movement I made a difference.

Romy (Haligonia.ca):  The Halifax fans have yet to see you play (the first matchup between Maryland/Halifax is on Feb 20th), let’s hear your scouting report on your game.

Daniel Artest: Haha…tell Les Berry to be ready because I’m a very physical player. I may be 6’5 but I’m tough as nails. Basically to make a long story short, I take no sh*t.

Romy (Haligonia.ca): You have your own blog that looks at your life as a minor league ball player, what got you started on writing a blog?

Daniel Artest:  I just wanted to give people some insight on what we as minor league players go through. Like I pay my own housing, do my own physical therapy but it’s all for the love of the game. Check me out, Halifax: danielmartest.blogspot.com

Romy (Haligonia.ca):  The Rainmen roster is full of New Yorkers (I’m surprised you’re not playing for Halifax), let’s your hear some of your stories/thoughts on some of these guys.

Daniel Artest:  I wanted to play for Halifax. Big Strick is a streetball legend I look up to. I’m animated like him, play to the crowd. People may think I go overboard but in the minor leagues, fans love it. I want them to keep coming back.

Gary [Ervin] is tough too. One of the best guards I’ve ever played against.

I know Gordon [Malone] from watching him play against Ron. I don’t know Greg [Plummer] but I hear he’s good.

Romy (Haligonia.ca): I know you get Ron Artest questions all the time, but how much of an influence did he have on your game? And who else had an integral part in your growth as a basketball player?

Daniel Artest: Ron has a big influence on my career. In the summer we still train together and honestly I’m stronger but he’s so quick. I love my bro. I owe him everything. My dad also helped me on the court. He bullied me until I was 14, lol. He made me tough. All the Artest boys are tough.

Romy (Haligonia.ca): You played on the Sacramento Kings summer league squad, what was that experience like?

Daniel Artest: It was amazing!!!! Playing in the summer league was awesome. Though I only scored 2 pts. The experience was great because in practice I was killing. I gained a lot of respect that week.

Daniel Artest:  I’m a big Spurs fan. Timmy, Vinny Del Negro and David Robinson are my favorite players. I use to wear #15 for Del Negro. Dejuan Blair is my fave player too. Much respect to undersized big men.

Shoutout to the city of Halifax!!!!!

Note:  Just a little over a week ago, Daniel Artest parted ways with the Maryland Greenhawks. I followed up with Daniel on to what sparked the move…

Romy (Haligonia.ca):  I just got news that you parted ways with the Maryland Greenhawks, what caused the move? And what’s next for Daniel Artest?

Daniel Artest:  Yeah. I asked out of my contract. A lot of crap was going on. Maybe if I was being paid more I’ll deal with what was going on but it wasn’t worth it so I’ve decided to just walk away from that situation. All I can say is that players need to be players. Not coaches, GM’s. Peace!!!!!
_________

Big thanks goes out to Daniel Artest for taking part in our Q and A, check him out on Twitter, @Daniel_Artest.  The Rainmen face off against the “Daniel-Artest-less” Maryland Greenhawks here in Halifax on February 20th.