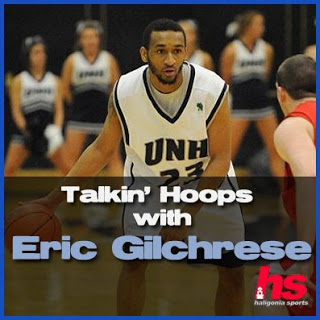 With the departure of backup point guard, Adris DeLeon, earlier in the season, the Halifax Rainmen needed someone to fill in that void off of the bench.  So back in March, the Rainmen signed the former Manchester Millrat starting point guard, Eric Gilchrese.  Gilchrese, who is originally from Illinois, was selected 8th overall in the PBL draft last October.  He played for the NCAA Division 1 school, the New Hampshire Wildcats before making the transition to the PBL.  Now, Gilchrese is one of the offensive weapons off of the Rainmen bench as they battle through the PBL playoffs.  I had the chance to ask Eric a few questions about his transition to the PBL, his run-in with Puerto Rico’s Rafael Cruz and what his video game signature move would be.
__________

Romy (Haligonia.ca): How has the transition been from the Manchester Millrats to the Halifax Rainmen? Is it tough changing teams midway through the season?

Eric Gilchrese: It has been somewhat of a easy transition, the only struggle which everyone that goes to a different team deals with is the transition on the bball court. Learning the plays and the system, players, and how the coach is, are all some of the transitions that I have faced. How we do things with my old team differs from things on this team. I would say its kind of tough, but its kind of not a tough transition if you could understand what I mean.. If you’re a bball player then you understand what i mean!

Romy (Haligonia.ca): Did you know a lot of these guys before joining the team?

Eric Gilchrese: Yes, I knew a few of the guys before I came. TB, G. Ervin, Big Dre. Tony B and Dre are from Chicago so I knew them from back home.

Romy (Haligonia.ca): Andre Levingston brought you in to play a specific role on this Rainmen squad, what’s your role with this team?

Eric Gilchrese: My role on this team: Put the ball in the BOTTOM of the NET!!

Romy (Haligonia.ca): You played with the University of New Hampshire last year, what has been the biggest change from college to the pro game?

Eric Gilchrese: Biggest transition from the college game to the pro game is probably the way practices are. In college everything we did we had to go HARD, even if you were going to get water, we had to still go HARD..NO DAYS OFF OR POSSESSIONS OFF!! The pro game, is more laid back.

Practices are not as intense as college to sum everything up! 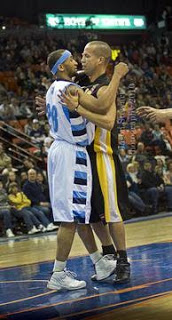 Romy (Haligonia.ca): Flashback to the game against Puerto Rico when you got tangled up with Puerto Rico’s Rafael Cruz, what happened there? What were you thinking when he put his hands on your throat?

Eric Gilchrese: What with me and CRUZ is..I tried getting open for the ball and he just grabbed me, so me being me, I elbowed him to get him off me. So then he wouldn’t let me go and I told him he betta let me go or ima get ejected from this game because I’m going to punch you right in the face. LOL, so what I was thinking when he put his hands around my throat, lets just say I cant say what I was thinking. I gotta keep that a secret, haha!

Romy (Haligonia.ca): When you were a young kid growing up in Illinois, who do you look up to as a youngster? Who were on the posters on your wall?

Eric Gilchrese: When I was a kid, I looked up to one of my big cousins by the name of Ty Johnson. He was the teacher and I was the student! I learned so much from playing and watching his game tapes! I didn’t look up to anyone else who played ball..I just wanted to do and play just like HIM!

He’s 4 or 5 years older than me and he’s a great guy too. So I looked up to him the most! He taught me everything I know about basketball, crossover dribble, spin moves, how to do this move, how to read screens, come off a pick and roll, etc., you get the picture.. Everything!! He’s the reason I’m the bball player I am now! Thanks Big cuz! Oh and Ty, you can’t beat me one on one anymore! LOL, he used to beat me all the time, I could never win..but he knows what it is now!! Love you cuz!

Romy (Haligonia.ca): Let’s say they create a video game with you as one of the players, what’s your signature move?

Eric Gilchrese: If they made a video game and created me..my signature move would most likely be a LEFT to RIGHT crossover!! That’s my go to move!!
__________

A huge thanks goes out to Eric for taking his time to answer our questions, be sure to catch more about Eric at the Rainmen’s official website, Rainmenbasketball.ca