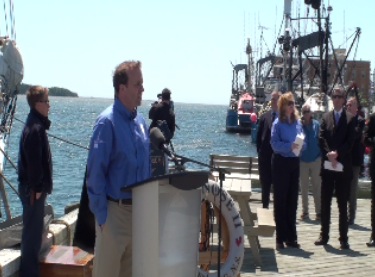 The 30-day countdown has begun for the largest international festival in North America in close to a decade.

Bluenose II, Nova Scotia’s ambassador Tall Ship and part of the event, was the backdrop for the announcement.

"It takes a whole community to welcome the world and we are ready to do just that in 30 days," said Colin MacLean, president and CEO of Waterfront Development Corporation Ltd., which is organizing the event. "Our partners, volunteers, and outport communities have certainly helped bring us to this exciting point."

Dartmouth waterfront will once again be home to the popular Pirate’s Landing.

"The Halifax waterfront will look amazing," said Leanne Strathdee, event director for Tall Ships Nova Scotia 2009. "Whether you stand at the Casino, or the Seaport, looking north or south, you will see spars, masts and rigging, all the way up, and down the waterfront.

"We want to provide information for everyone to have the best possible Tall Ships experience."

There will be four zones on the Halifax side and one in Dartmouth offering information booths, kiosks for ticket to board ships, family rest areas, merchandise, food, entertainment and activity options. The kiosks will also serve as lost child centres.

In addition to Pirate’s Landing on the Dartmouth side, Amistad, Peers Fancy, and a Kingston Class vessel from the Canadian Navy will be open to the public.

"We are proud to welcome these ships and exhibitors," said Bea MacGregor, executive director of Alderney Landing. "On Sunday, as part of the Canadian Naval centennial celebration, shore re-enactors participating in the Longboat Flotilla will cross the harbour to Alderney Landing and join the community for a breakfast."

A key element of a large-scale event like this is transportation alternatives. Metro Transit is partnering with organizers to provide additional bus and ferry services as well as a waterfront shuttle.

"We want to ensure people have a variety of transportation options during Tall Ships and to ensure safe and easy access to the downtown core," said Lori Patterson, manager, public affairs, Metro Transit.

The visit to Nova Scotia is part of the Tall Ships Atlantic Challenge. Ships are currently headed towards Charleston, South Carolina.

Opening ceremonies will be July 16 at the Maritime Museum of the Atlantic. The highlight July 20 will be the Parade of Sail as most of ships race off to Belfast. Some of the ships will visit outport communities across the province.

For updates, event schedules and tickets, visit www.tallshipsnovascotia.com or call the Tall Ships office at 902-405-7700.

Tall Ships Countdown Is On!
https://haligonia.ca/tall-ships-countdown-is-on-3005/