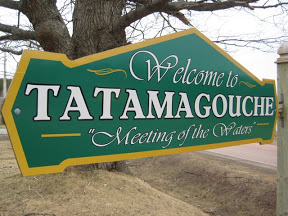 Last weekend, my sister and I decided to take a road trip. Even though we had a day jam-packed full of errands, we wanted to venture along the North Shore and brake for whatever caught our eye. My daughter groaned and reluctantly agreed to come with us.

Tatamagouche is where the hit series The Week the Women Went was taped last summer and aired on CBC-TV this past winter. After stopping for a quick picture of the village sign, we realized it was Saturday morning and the Farmer’s Market would still be open. 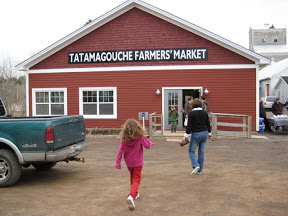 We entered “Creamery Square“, a new heritage development, that houses an interactive heritage centre (re-opening summer of 2009) and the weekly Farmer’s Market. Once inside one of the big red buildings, you were greeted by tables of homemade soaps, jewelery, fresh baked pies, meats, clothing and the most enormous brownies I’ve ever seen. I was told that a local woman combines cake and brownie recipes. As with many Farmer’s Markets across Canada, it is a regular meeting place for locals and a place to stock up on tested-til-perfect food items. 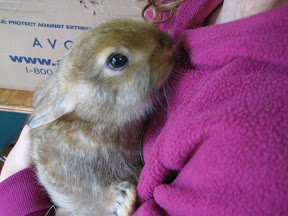 After my daughter drew a picture at the kids art table (they gave a prize to each young artist), my sister noticed bunny rabbits near the front entrance. The owner had black, white, and brown bunnies for children to hold gently and pose for a picture. Instantly, what my daughter was convinced would be a boring day, turned into an awesome one.