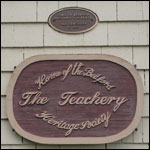 "The Teachery", located at 9 Spring Road, is to become the province's first hospice.

A circa 1892 Bedford house that has been a family home, a residence for teachers and a public meeting space will soon be sold to become the first hospice in Nova Scotia.

Located at 9 Spring Street, the sale of the registered heritage property for less than market value to the Hospice Society of Greater Halifax received Council approval following a public hearing.

The $5,000 purchase price will be re-directed into an outdoor interpretation panel, as recommended by HRM’s Heritage Advisory Committee.

As a result, no money will be transferred to the municipality’s sale of land reserve.

“Council recognized the Hospice Society is working to address a need for the provision of community-based assistance to the terminally ill and their families,” said Mayor Peter Kelly.

Vacant for more than a year, the building will require significant renovations before it can be used as a hospice. Those costs will be assumed by the Society.

In the short term the house will be used for the Society’s office and outreach programming while additional funds are secured to convert it into a residential hospice.

Built by well-known area builder George Canfield, the Pryor House was purchased by the Bedford Ratepayers Association in 1942, after which it was rented to local teachers and took on its popular name, The Teachery.

In 1980, title was transferred to the Town of Bedford and the house was leased to various community groups primarily for meeting space.

In July, HRM issued an Expression of Interest for offers to purchase the property. The Hospice Society submitted the only proposal. Under current legislation municipal property can be sold at less than market value to a non-profit organization with a two-thirds majority vote by Council at a public hearing.

The initiative to sell the Spring Street house was supported by Bedford Councillor Tim Outhit.

“It was very much a happy coincidence that the Hospice Society was looking for a location and this Bedford house needed a new purpose. It is gratifying that this piece of Bedford history will meet a community need well into the future,” said Councillor Outhit.

The building will maintain its current heritage designation and institutional zoning. Continued public access to the adjacent tennis court and playground will be included in the terms of sale.

“Teachery” building to be sold to Hospice Society
https://haligonia.ca/teachery-building-to-be-sold-to-hospice-society-7889/