When I was a teenager, I was desperate to prove that I was older and smarter than my numbered age implied, so I read “adult” books rather than any of the Young Adult (YA) materials that would have been available to me.  I would have been way too cool to enjoy the dystopian “Uglies” series, the hilarious Georgia Nicolson confessional series (by Louise Rennison) or even the ultra popular vampire love story, “Twilight”.

Out of my teen years, I’m finally discovering how awesome, fun, and smart YA books can be – I often find them better written with far more interesting and entertaining plots than their adult contemporaries. 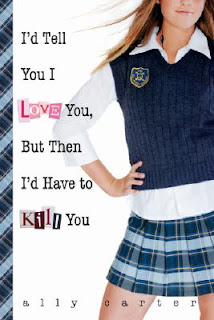 I’m currently enjoying Ally Carter’s spy story, “I’d Tell You I Love You, But Then I’d Have To Kill You” (the follow up is “Cross my Heart and Hope to Spy”).  If you’re a fan of pop culture, as I am, then this book is totally for you!  Filled with references (some overt, some subtle) to Buffy, Alias, Gilmore Girls, and Dirty Dancing, “I’d Tell You I Love You” is a young teen version of the cult fave movie, “D.E.B.S.”  (upping the similarity factor, Carter’s first book has been optioned and is slated to be released as a film in 2012).

Cammie and her three best friends, all geniuses who attend an ultra secret all-girls training school for spies (think the lite girl version of Hogwarts), take classes in Cultural Assimilation, Covert Ops, Countries of the World (including their varieties of language,) and learn how to incapacitate would-be attackers in their modified version of gym class.  Clever, funny, spyishly entertaining, a group of girls who are actually nice to each other, and a sweet little love story make this a great YA read.