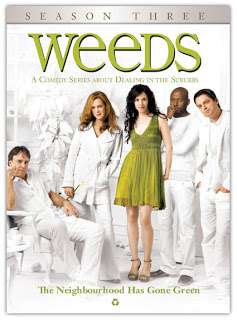 At my old apartment I was in TV addict heaven. I had all the theme packs I wanted, I had a perfectly programmed DVR, I had a TV in my room where it lulled me to sleep at night and greeted me in the morning. DVR’s are amazing, seriously. I never watched “real” TV, but did suffer from TiVO guilt – which is why I watched more Fringe and 90210 episodes than I really needed to.
When I moved, I decided to give up the expense of the set-up I had and go back to ghetto-vision (the trifecta of Canadian stations, plus a fuzzy french). I gave it all up, the DVR, the control, the guilt – cold turkey. And while I missed it at first, before the internet was connected, I don’t find myself missing it at all. I don’t even watch the channels I do have, mostly because I can’t stand the lack of choice and the commercials. I do watch it at work, but that hardly counts.
This doesn’t mean I’ve found more valuable ways to spend my time, of course. I’ve been watching a few series online, and I spend excessive hours on the interwebs doing nothing in particular. But I think this trend is starting to wane, hopefully I’ll catch up on my reading and maybe even do something productive… a girl can dream!
I’m currently working my way through Weeds and Six Feet Under, and I recently finished Dexter. Turns out I have a bit of a thing for Showtime and HBO.
A wise professor once advised me to watch very little TV and read often. It’s a simple equation that makes a lot of sense, and I’ve wanted to adopt it for years. It’ll happen sooner or later, but in the meanwhile, I have some facebook creepin’ to do.

Television, the drug of the nation
https://haligonia.ca/television-the-drug-of-the-nation-3566/