Ten years ago library patrons were clamouring for Dan Brown’s The Da Vinci Code, The King of Torts by John Grisham, and almost anything by Nora Roberts.

Readers were also using the summer to catch up on some the recent award winners, such as.

In June of 2003, Valerie Martin’s Property (M) was announced as the (somewhat surprising) winner of the 2003 Orange Prize.

Manon Gaudet is unhappily married to the owner of a Louisiana sugar plantation. She misses her family and longs for the vibrant lifestyle of her native New Orleans, but most of all she longs to be free of her suffocating domestic situation. The tension revolves around Sarah, a slave girl given to Manon as a wedding present from her aunt, whose young son Walter is living proof of where Manon’s husband’s inclinations lie. This private drama is played out against a brooding atmosphere of slave unrest and bloody uprisings. And if the attacks reach Manon’s house, no one can be sure which way Sarah will turn…

Ten years ago, A Song for Nettie Johnson (M) by Gloria Sawai won the 2002 Governor General’s Award for Fiction. 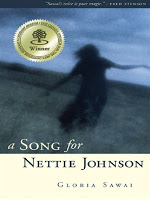 In this collection of short stories set on the Prairies, Gloria Sawai examines the heartbreaking lives of people who are flawed but also blessed. In the title story, an outcast, a misunderstood woman and her disgraced lover struggle toward a last chance at redemption. In others: a young girl learns important things about herself – some of them extremely unpleasant – on a storm-ravaged Mother’s Day weekend; a woman sitting on the deck outside her Moose Jaw home receives an unusual and unexpected gentleman caller; a woman on a road trip in search of her erstwhile husband finds instead the one thing she never expected to see again in her lifetime; a group of young school students prepares a memorial for the town’s deceased doctor, at the inadvertent risk of deeply offending his widow.

Strong at the Broken Places (M) by David Doucette claimed the Dartmouth Book Award for Fiction.

After the death of her husband, Freda MacDougall, who has spent her life in small-town Ingonish, finds herself alone and needing to distance herself from her past. She accepts an invitation from her black, bingo-playing friend Wilena Guy to visit her in Vancouver, where she strikes up a friendship with a good-natured Chinese widower. When their friendship evolves into romance, Freda discovers a new definition of charity and, finally, self-discovery.

When Mary-Mathilda, one of the most respected women on the colonized island of Bimshire (also known as Barbados), calls the police to confess to a crime, the result is a shattering all-night vigil. She claims the crime is against Mr. Belfeels, the powerful manager of the sugar plantation that dominates the villagers’ lives and for whom she has worked for more than thirty years as a field laborer, kitchen help, and maid. She was also Mr. Belfeels’s mistress, kept in good financial status in the Great House of the plantation, and the mother of his only son, Wilberforce, a successful doctor, who after living abroad returns to the island. Set in the period following World War II, The Polished Hoe unravels over the course of twenty-four hours but spans the lifetime of one woman and the collective experience of a society characterized by slavery.