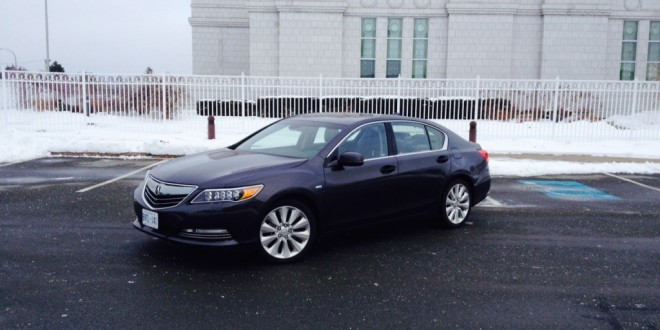 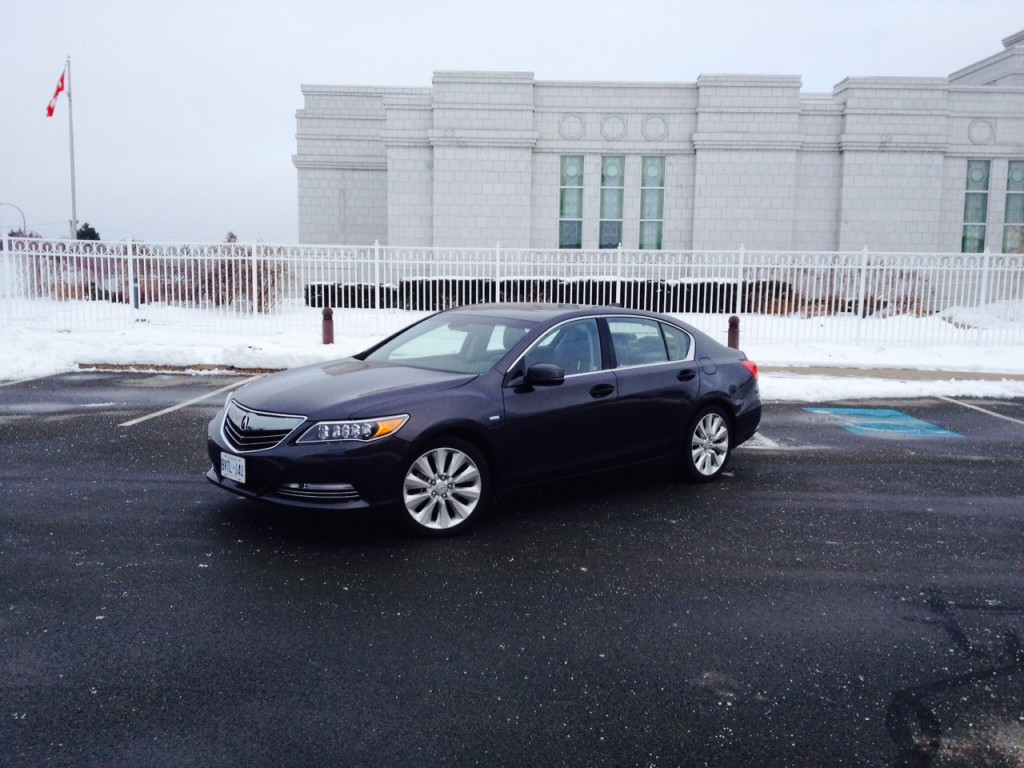 I’m always skeptical of the word ‘sport’ in the auto industry. Sport means different things to different people when it comes to cars and it seems as though the industry likes to use the word to be synonymous with performance.

But true performance cars don’t need the word at all. There’s no ‘sport’ edition of the Mustang, after all and saying a Ferrari F12 is ‘sporty’ is a bit like saying “Kanye West is his biggest fan”. It goes without saying.

So when Acura sent an RLX “Sport Hybrid” to my driveway to try for a week, I was immensely skeptical; not least of which was due to the second word behind the dreaded sport word.

Hybrids are generally anti-performance. They generally have one job to do and that’s to use the least amount of fuel possible. And there’s nothing necessarily wrong with that. But when you mix performance with hybrids, wouldn’t you end up with a vehicle with a bit of an identity crisis? Well, not really as it turns out. But before we get into the dynamics, let’s take a look at Acura’s new flagship in terms of styling. 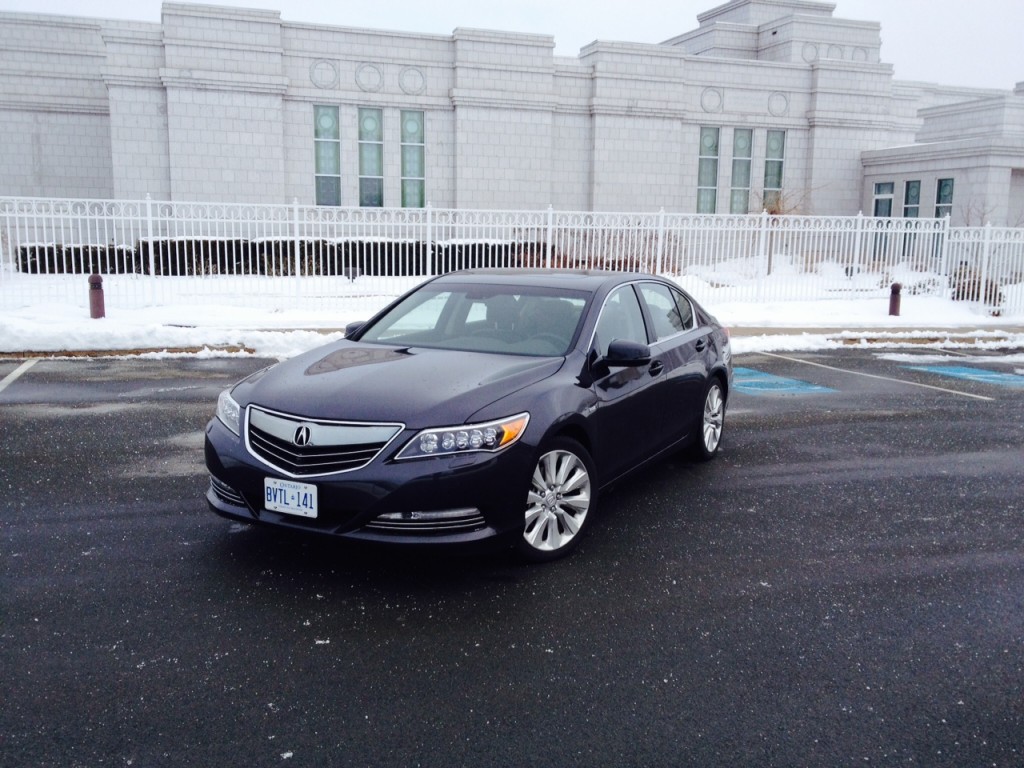 The RLX is unmistakably Acura with his now signature jewel-eye headlights along with the infamous shield on the grille, which has been toned down a bit over the old RL. The Sport Hybrid version gets LED turn signal indicators up front along with LED fog lights.  Its side profile is very conservative, bordering on completely uninspiring.  The nice looking 19-inch wheels are the only things that will keep you away when looking at the RLX from the side and unfortunately there isn’t much around back to keep your attention either. The exception is at night when the LED tail lights light up to a surprisingly eye-catching design. Overall the look doesn’t scream “look at me” which might be agreeable to some, but if you’re going to attach the word ‘sport’ to a car, should it not look at least somewhat sporty? The upside is there’s also nothing that gives it away as a hybrid either. Overall, Acura can do better in terms of looks. 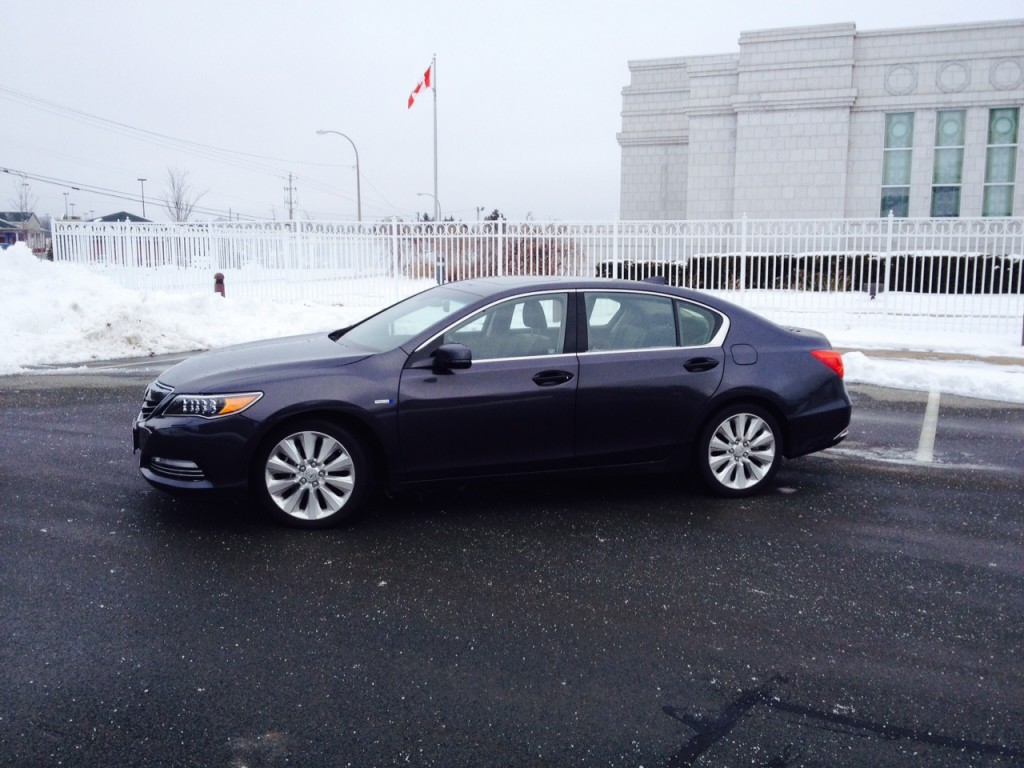 Inside is a much different story. The layout can be a bit overwhelming at first with the dual screens, however there is a noticeable reduction in the amount of buttons on the centre stack as a result giving it a much cleaner look. 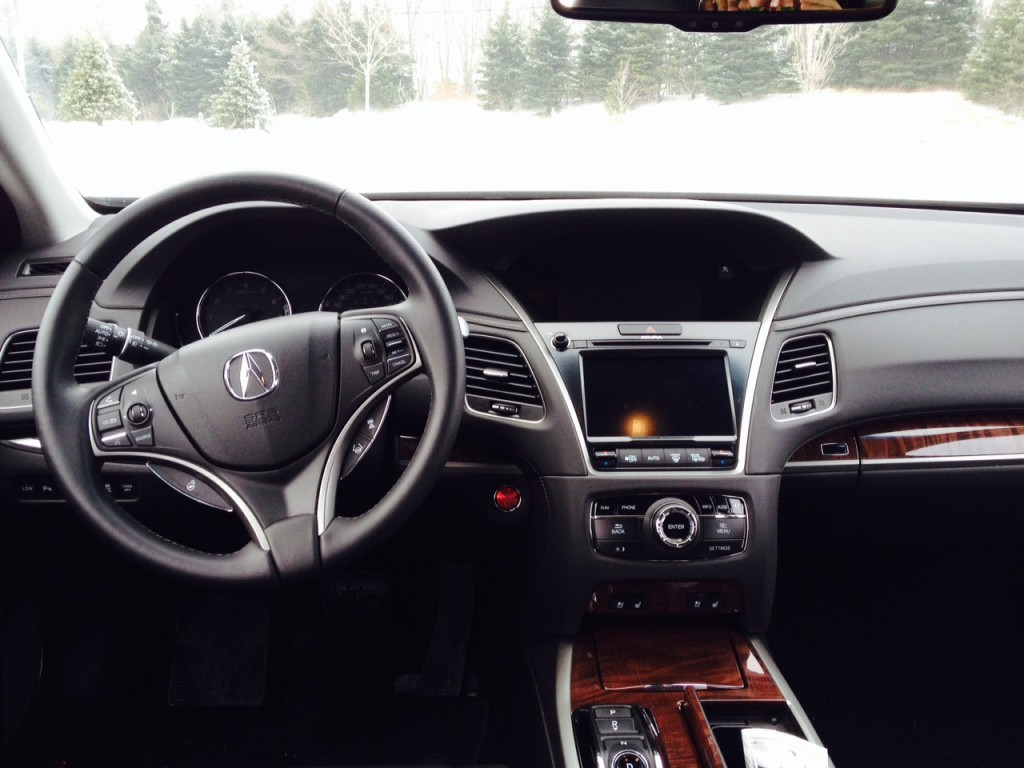 A friend of mine, who owns a 2004 Acura EL, saw the faux wood trim and said, “Acura is still doing that?” with a look of disappointment on her face. She also didn’t seem to like the buttons, which replace a traditional gear shifter. I must admit, that a traditional shifter would make a bit more sense, however it does free up room and they aren’t cumbersome to use, in fact, you get used to them quite quickly. 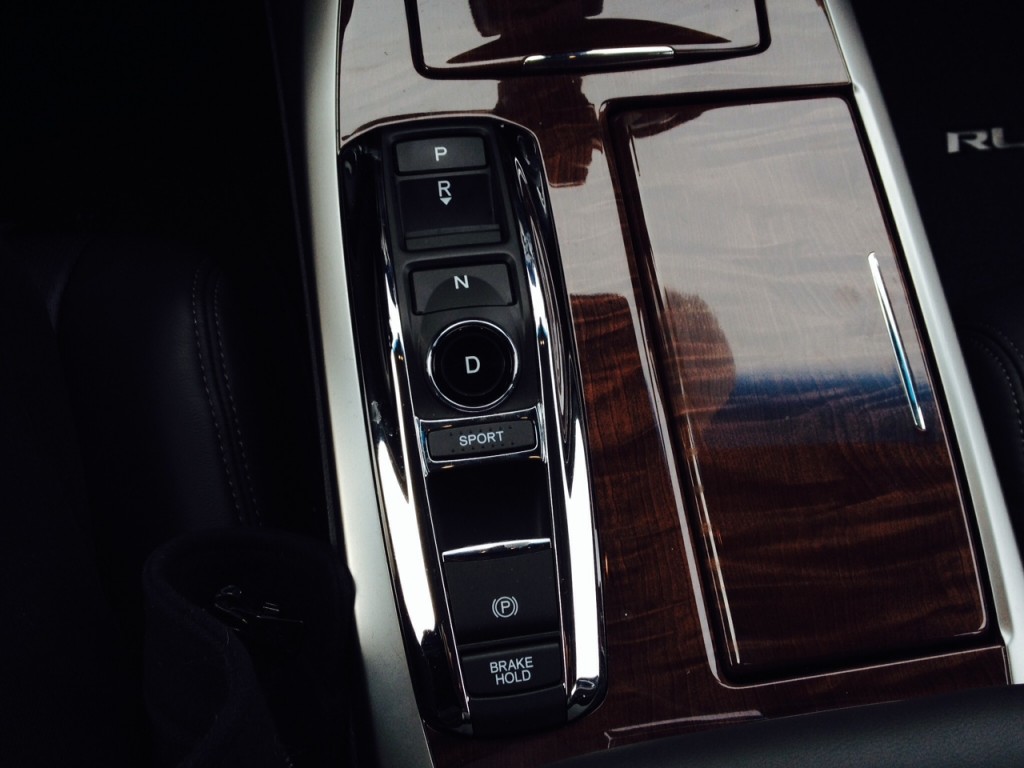 The dual screens take a bit more getting used to, however. They are the same screens found in the new TLX and unfortunately I have the same issue with them. Most of the time, the second screen is made redundant. It displays the same information as the other screen does. It isn’t until you venture into another function such as navigation where the dual screens start to make a bit more sense. Now you can keep your nav map up all which being able to scroll through radio stations on the second screen. 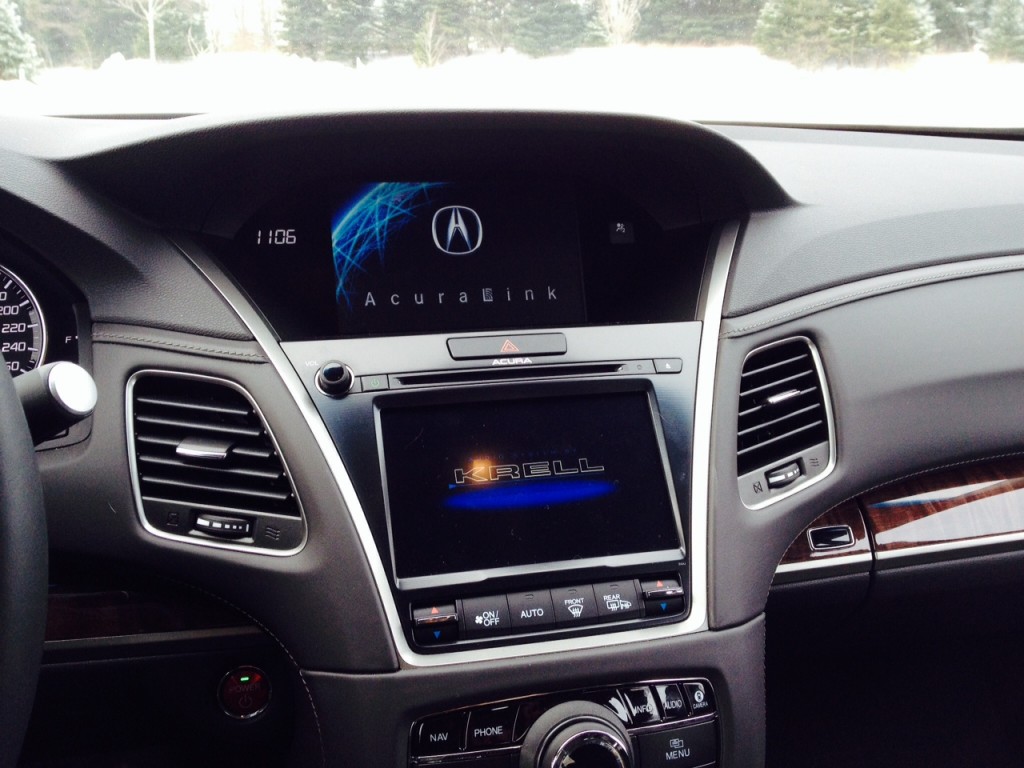 As you would expect, comfort is a priority with agreeable seats, however they aren’t nearly as bolstered, as you would expect from a “sporty” car. Rear legroom is good, but others in the segment can beat it quite easily. Trunk space is not as big as you would think thanks to the battery pack for the hybrid system. It will work just fine for groceries, but if you have any large items to haul, you may want to consider borrowing your dad’s Buick. 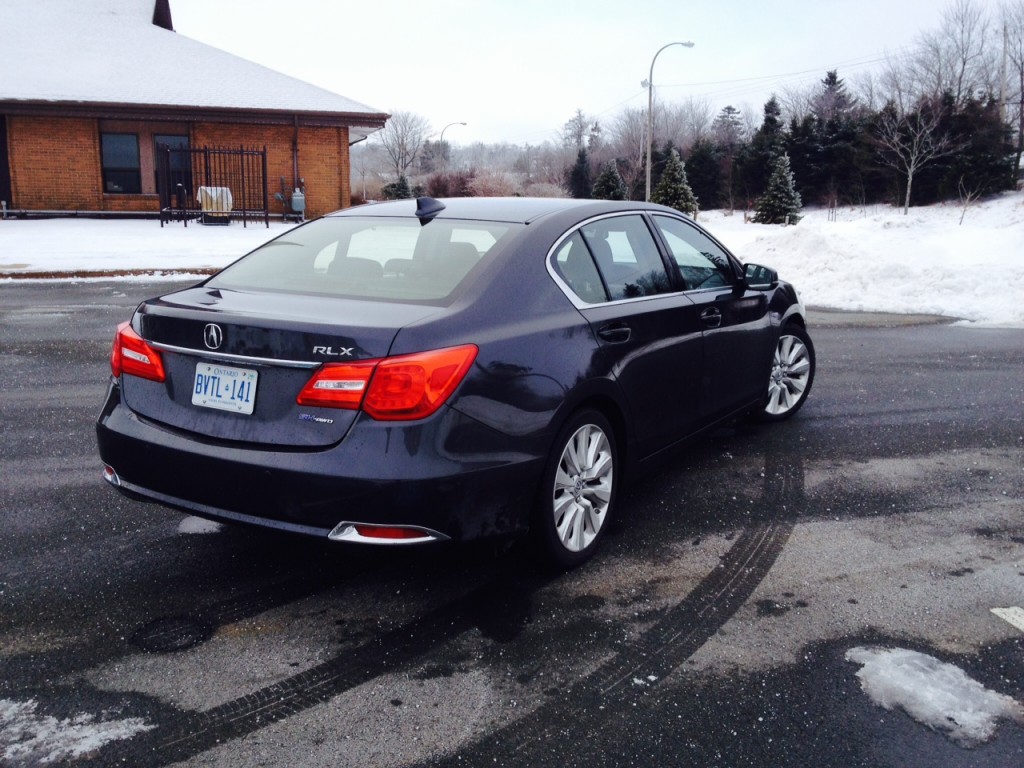 The RLX’s hybrid system is uniquely set up. Instead of the electric motor working in tandem with gas engine supplying power to the front wheels as a typical hybrid does, the hybrid system sends power to the rear wheels while the gas engine powers the front wheels. The end result is a unique version of Acura’s Super Handling All-Wheel Drive (SH-AWD) system. Matched with a form of four-wheel steering and you’ve got yourself a big car that handles very well. Incredibly well, actually. Not since my review of the BMW 5-series years ago have I encountered a big car with great handling abilities. There is no hint of under steer, but believe it or not, you can get the RLX to over-steer if you become a bit over zealous. However there is no denying the corner carving abilities of the RLX. Hmm, that’s one mark ticked off in favour of ‘sport’ in seems. 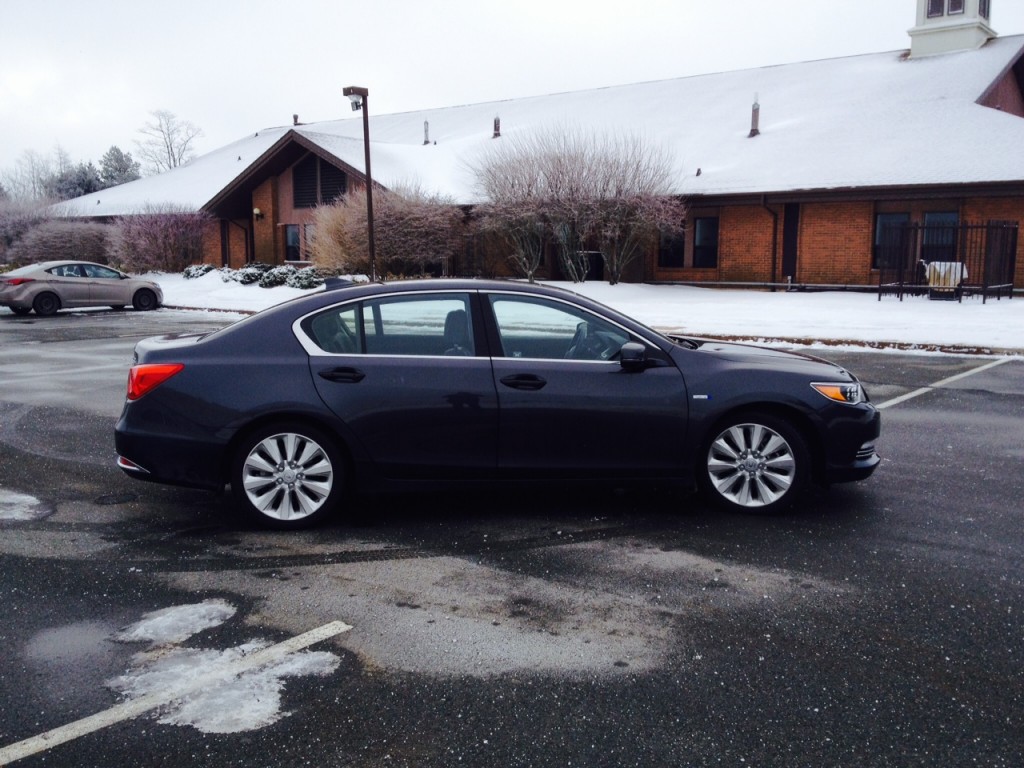 The second comes when you put your right foot down to the floor. With the gas engine producing 310 horsepower and 272 pound-foot torque, the RLX was never going to be a slouch, however add in the power from the rear motors and you’ve got yourself a total of 377 horsepower. And it definitely feels it; in fact it feels as if it’s pushing 400 horses. And don’t think all that power runs through the whine of a continuously variable transmission. In fact, the Sport Hybrid comes with a 7-speed dual clutch system, which allows for quick and smooth gear changes via steering wheel mounted paddles. Since there is no gearshift, manual shifting can only be done through the paddles. My only issue with that is, like most vehicles that have steering mounted paddles, the paddles are not where you left them when you go into a turn. Column mounted paddles could easily alleviate this issue. 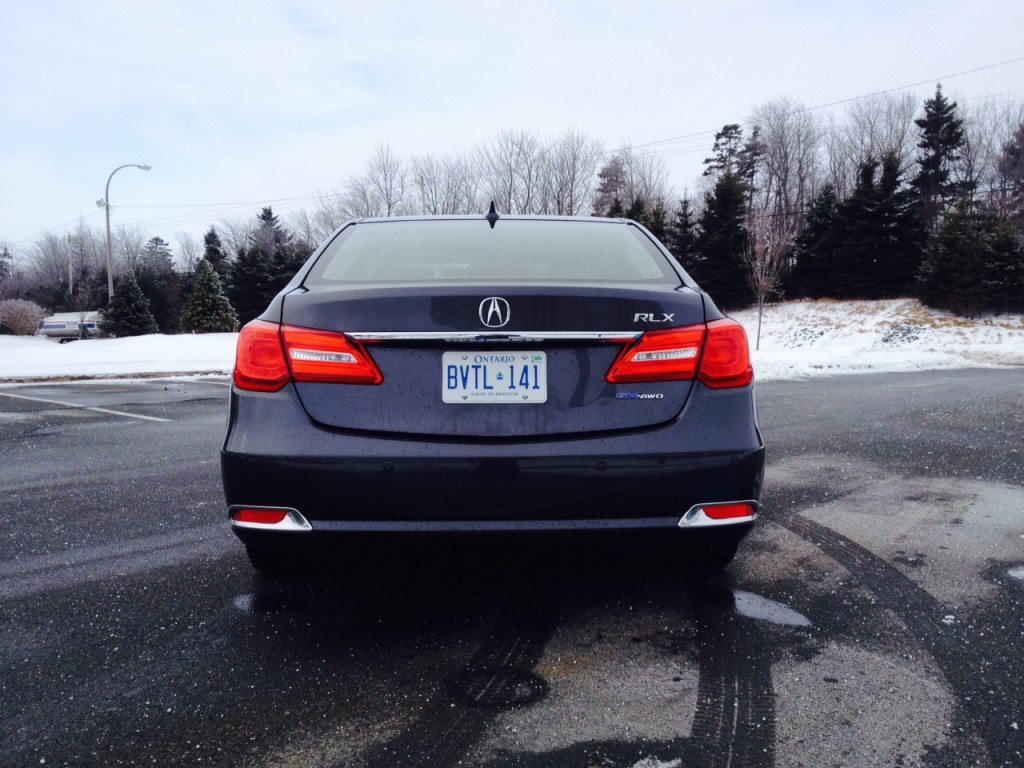 But the sensation of the RLX when pushed is incredible. It’s as if it turns into a different beast completely – way more menacing and capable than its exterior style (or lack thereof) would suggest. It’s oddly good at being a big sports sedan. Ah, there’s that word again. It’s safe to say that the RLX covers and deserves the ‘Sport’ in its name.

What about the hybrid part, though? 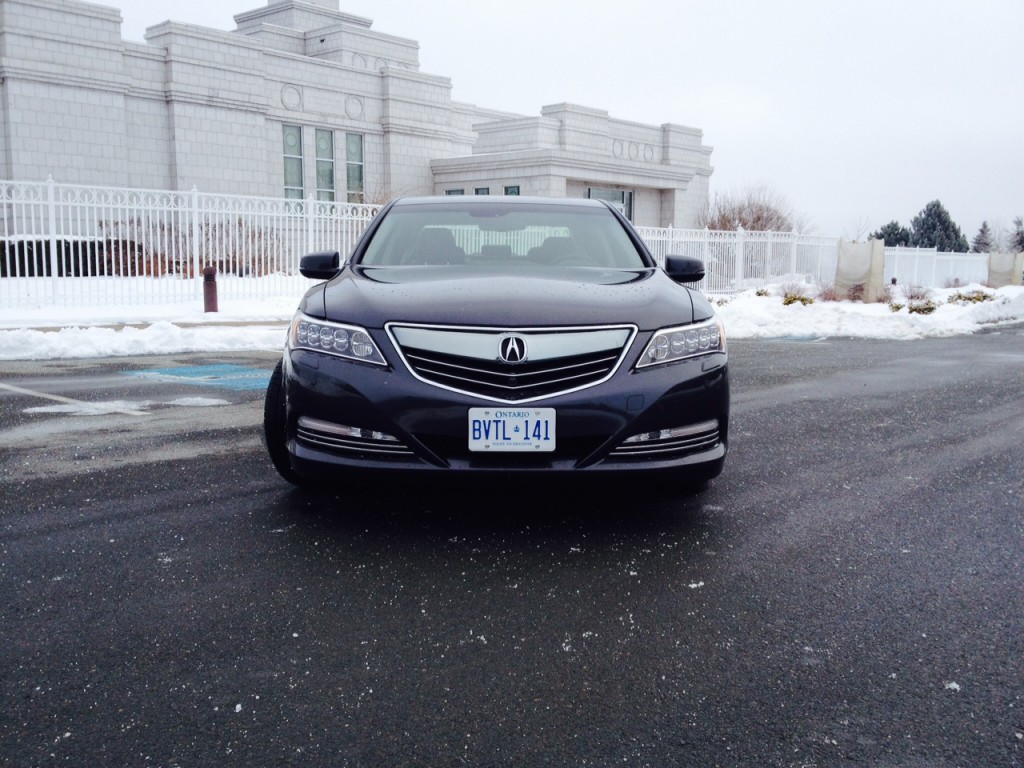 Well, it is technically a hybrid. On top of that, its official ratings are quite good at 8.0 L/100 kms city and 7.5 L/100 kms highway. For a big sedan in the real world though, I was able to manage 12.2 L/100 kms in most city driving. The RLX had Mother Nature against it with bitterly cold temperatures during most of my week with it, however for a hybrid, those numbers are still fairly unspectacular. That’s about the same rating that the regular gas engine RLX gets. I would imagine in warmer temperatures the advantage of the hybrid system would be clearer, however there really is no point to buying the Sport Hybrid for efficiency. 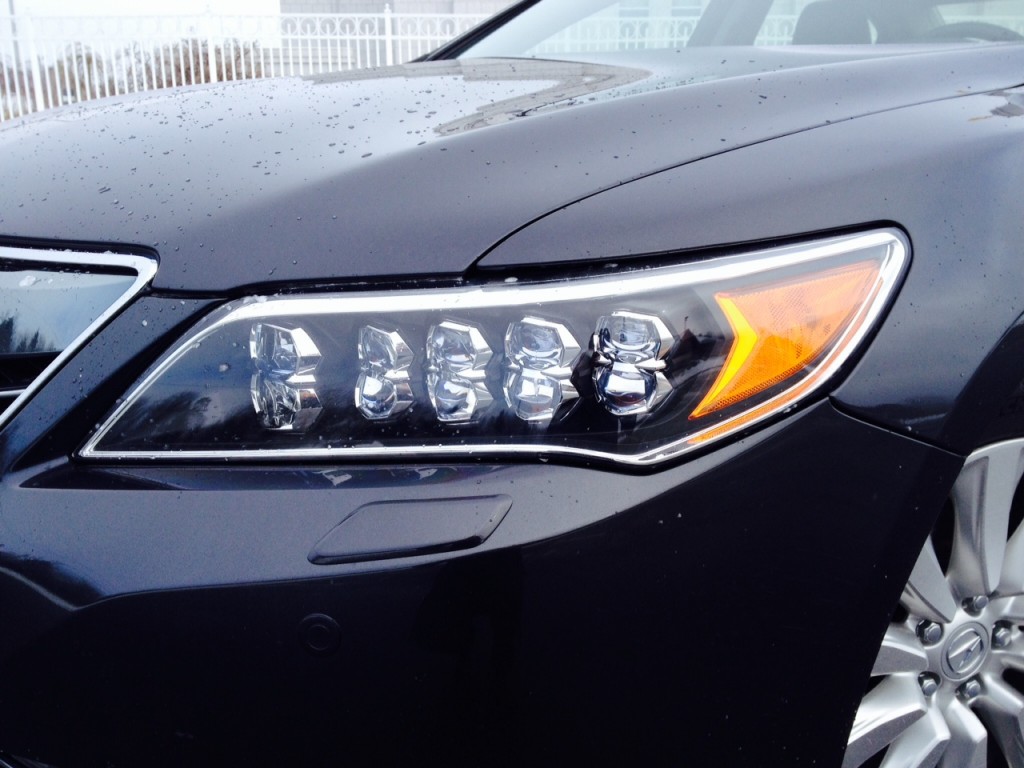 You want to buy the Sport Hybrid if you are a performance enthusiast. And with that, this is the first car I’ve ever driven that has a ‘sport’ designation that actually lives up to it. 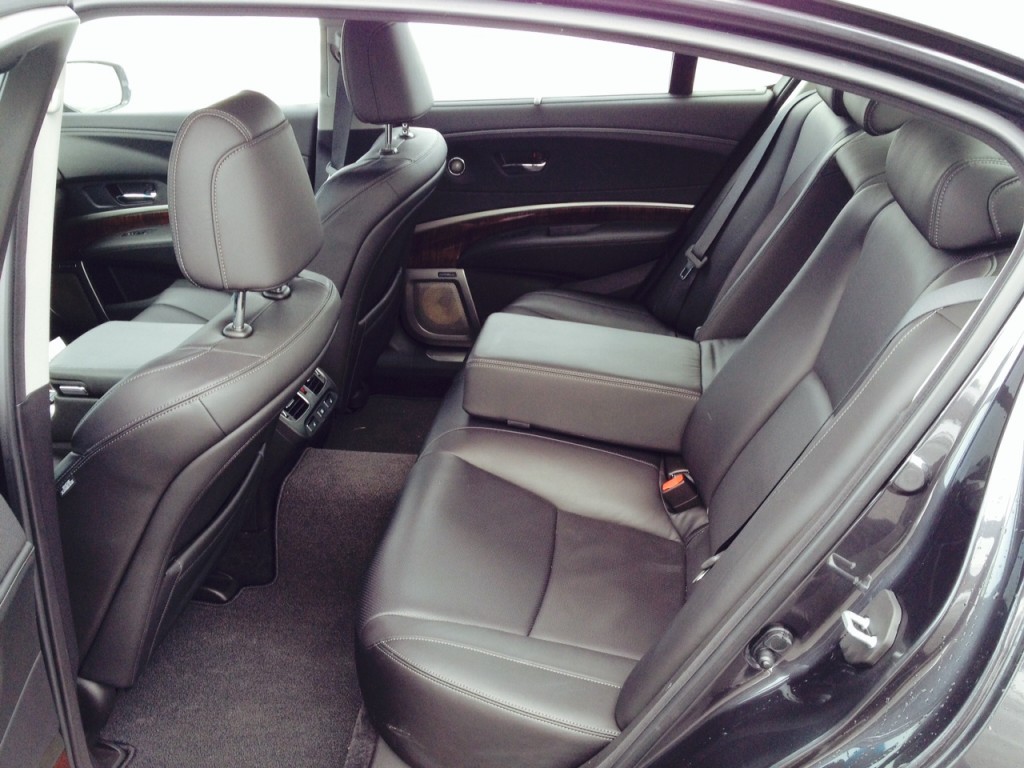 But let’s take a step back and examine the RLX Sport Hybrid’s price. At $72,085, it creeps into some pretty steep competition such as the BMW 550i and Cadillac CTS V-sport. Both cars are known for their performance credentials and the RLX can’t even claim better efficiency as an advantage. Both the BMW and Cadillac have better looks to boot. 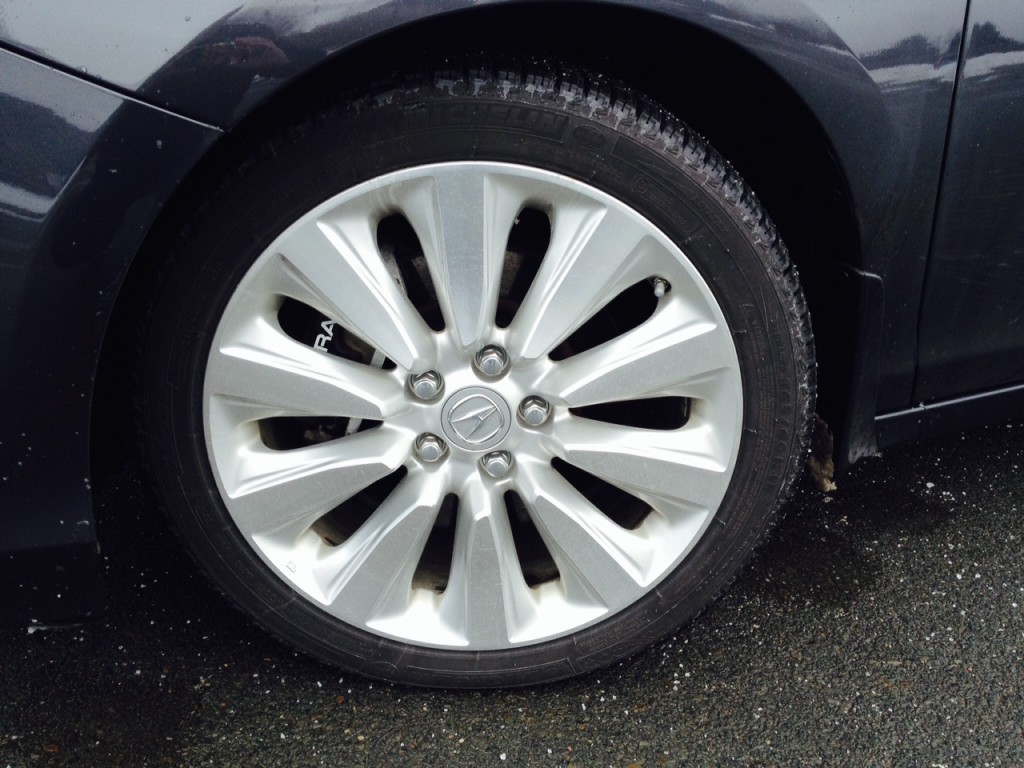 However, there is a stigma attached to those kinds of drivers and you would likely fit in better pulling up at your favourite vegetarian restaurant in the Acura that you would either of those two cars. There’s a strange uniqueness and rarity about the RLX that gives it an advantage as well. 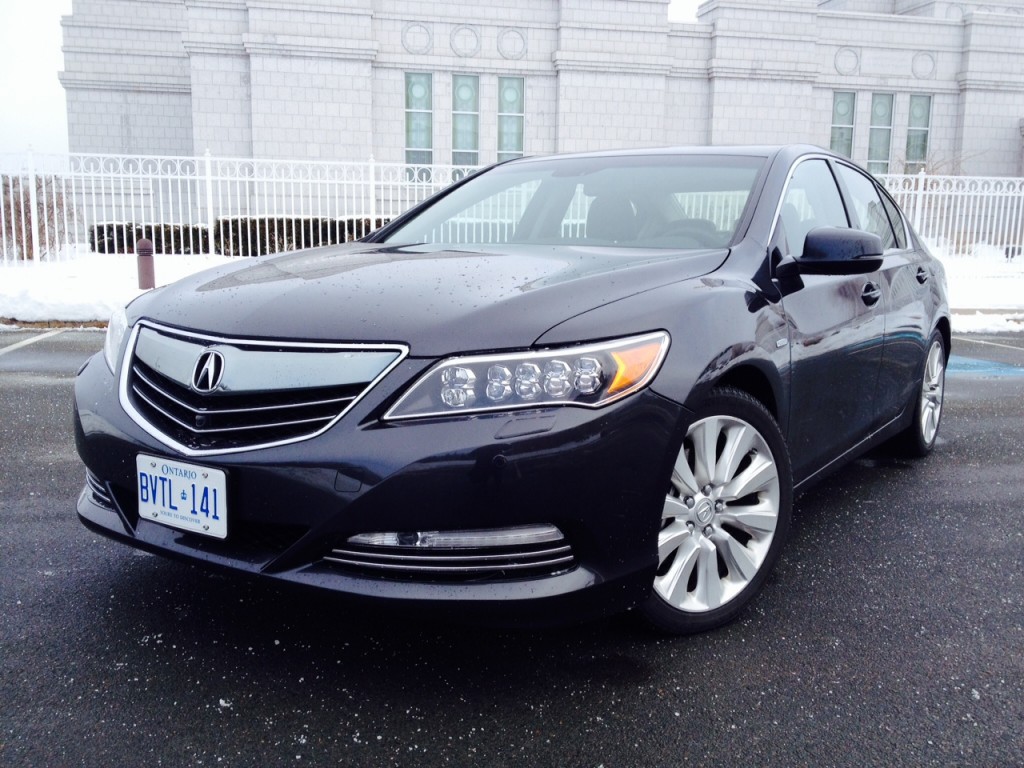 In the end, the RLX deserves every bit to be mentioned among its competition and more importantly, it is the first hybrid I’ve ever driven that left a big grin on my face.

A couple of years back I noticed a problem for Cadillac: they had very few crossover/SUV offerings in their lineup and far too many sedans and coupes. For someone like me, that isn’t a problem. I love sedans, hatchbacks, wagons, coupes...