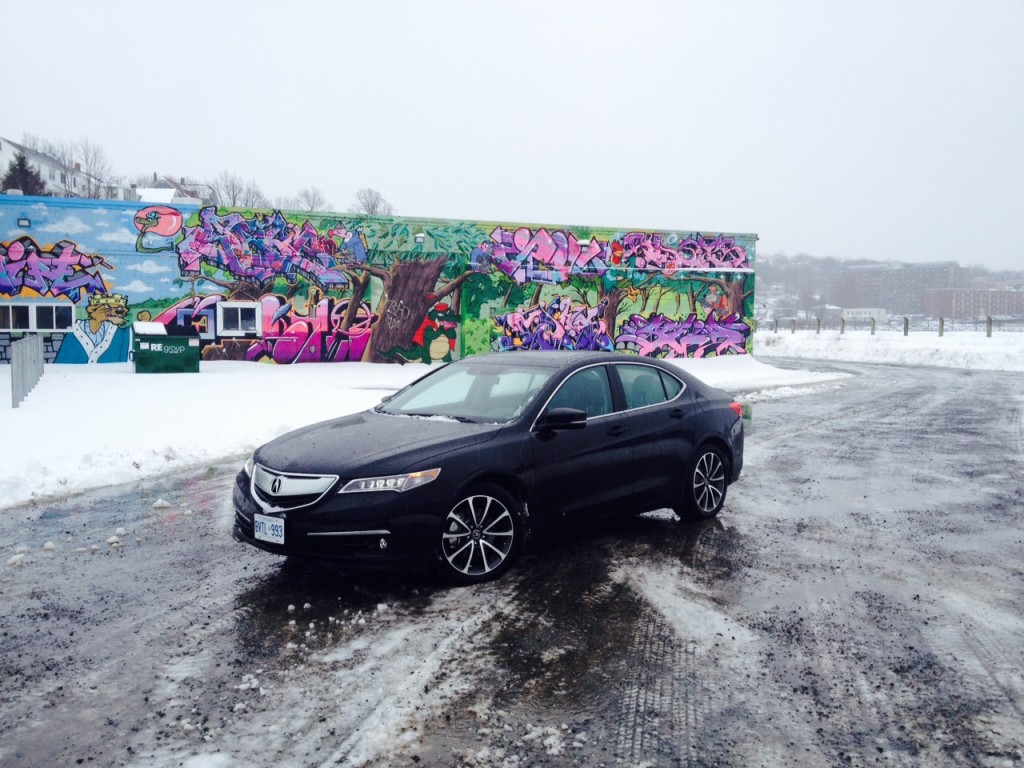 When I reviewed the recently redesigned MDX last year, I commented on the odd transition that Acura seemed to be going through.

It seemed as if they were slaughtering models left and right without really any strategy for replacing them.

Well, here is one of the first models to replace two that recently got axed. Yes, two. The TSX (which will be dearly missed if you are a driving enthusiast) and the competent TL.

I’m going to say straight off the bat that this poses an issue.

The problem with replacing two models with one is that the new model must be all things to those loyal buyers. When you have two models like the TL and the TSX – both quite good, but significantly different than the other, then something has to give.

Enter the new TLX – a new sports sedan that promises to be better than both the TSX and TL combined.

But let’s face it, it really can’t be everything to everyone, can it? I drove one to find out. 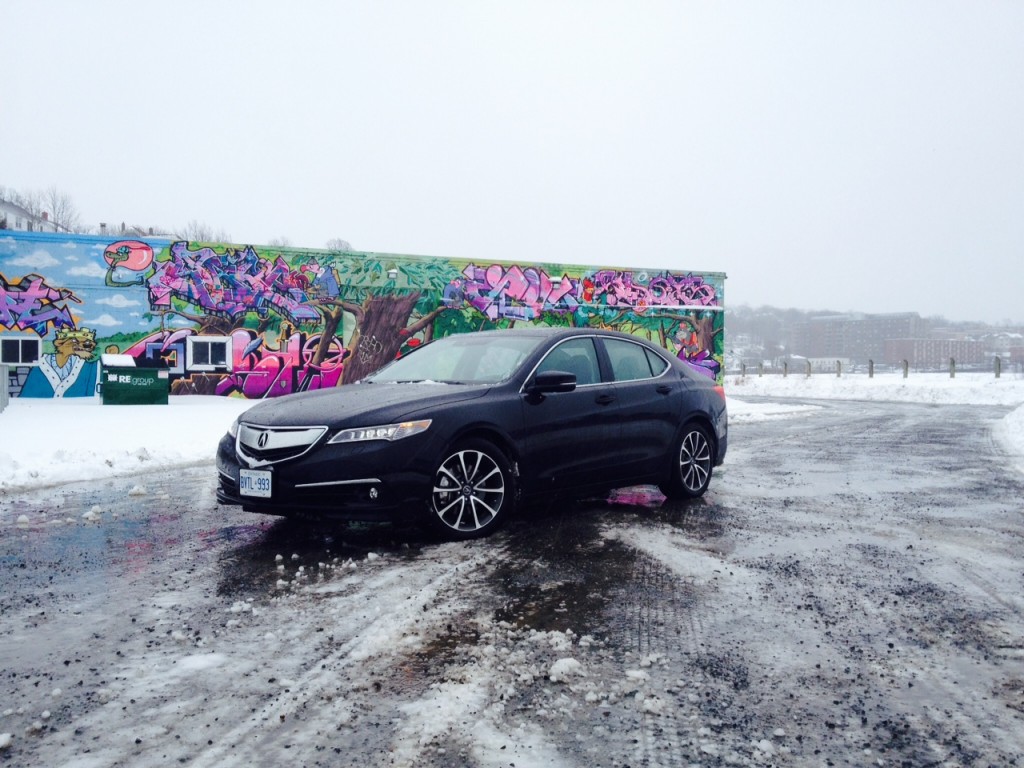 The TLX is shorter than the TL it replaces, but is longer than the TSX. The overall proportions of the vehicle are quite good. It has a low overall stance matched with Acura’s new signature jewel eyed headlights. The design of the jewel eyes allows the designers the ability to make thinner and thus “sportier” looking headlights. Unfortunately the low stance and squinty headlights are the only hints of “sportiness” in the design. 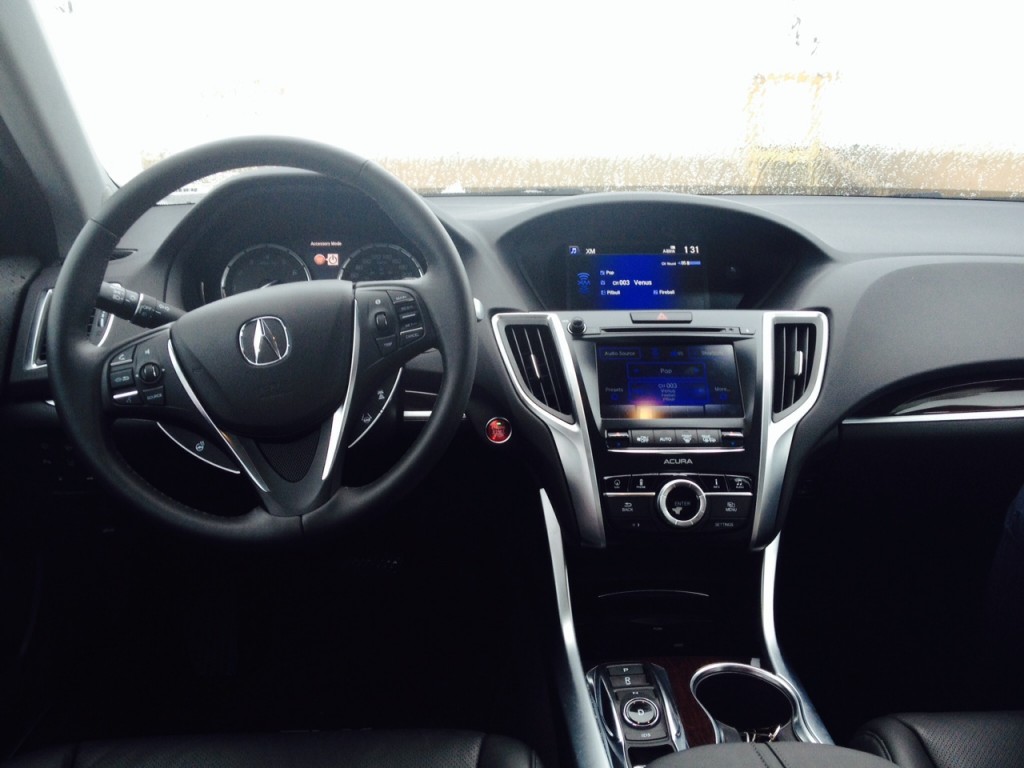 The side profile is nice but plain, as is the rear end which is clean, but again nothing that anyone would ever look twice at (although I must admit the rear LED’s are eye catching at night). Overall the design is decidedly Acura. 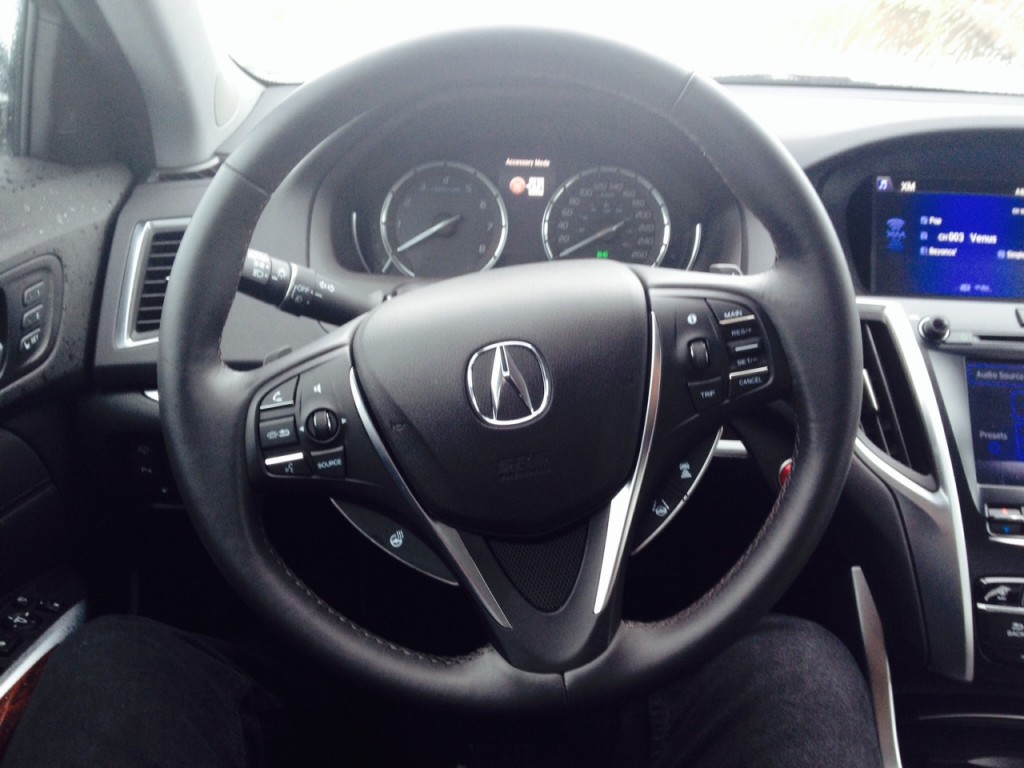 The TLX has the same wheel base as the TL so the interior room is actually identical. As a result interior room is both comfortable and plentiful. Cargo room is exceptional as well as most will be able to fit most of their stuff inside the trunk with ease. Interior fit and finish are up to snuff as the materials are of high quality and design. For example, Acura uses real wood grain trim, not the fake stuff. 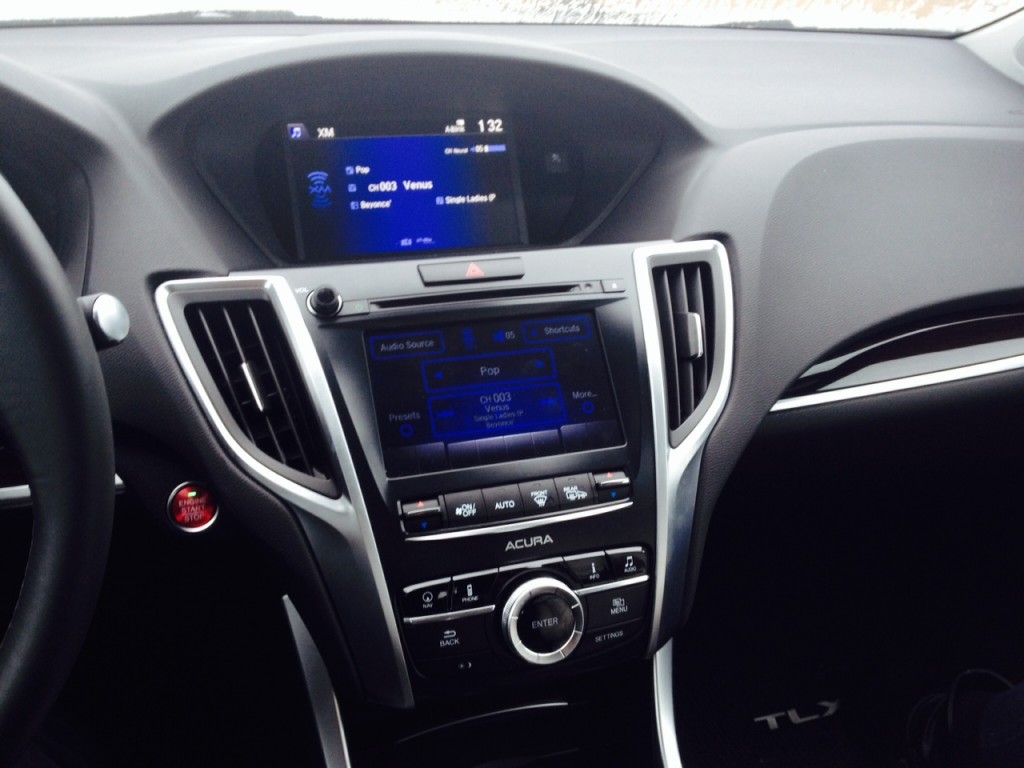 The interior layout is also nice, if a bit overwhelming. Most notice the two tiered display screens right away. The idea behind having two screens is being able to do two things at once. For instance, if you are using your navigation and have the map up, you can also have the radio controls set to the other screen. This eliminates the need to veer back and fourth between screens when driving, which eliminates more distraction. My only issue with this is, if you aren’t using the info screens for two things at once, then the second screen becomes redundant. If you are just listening to the radio, it will display the radio information on both screens. 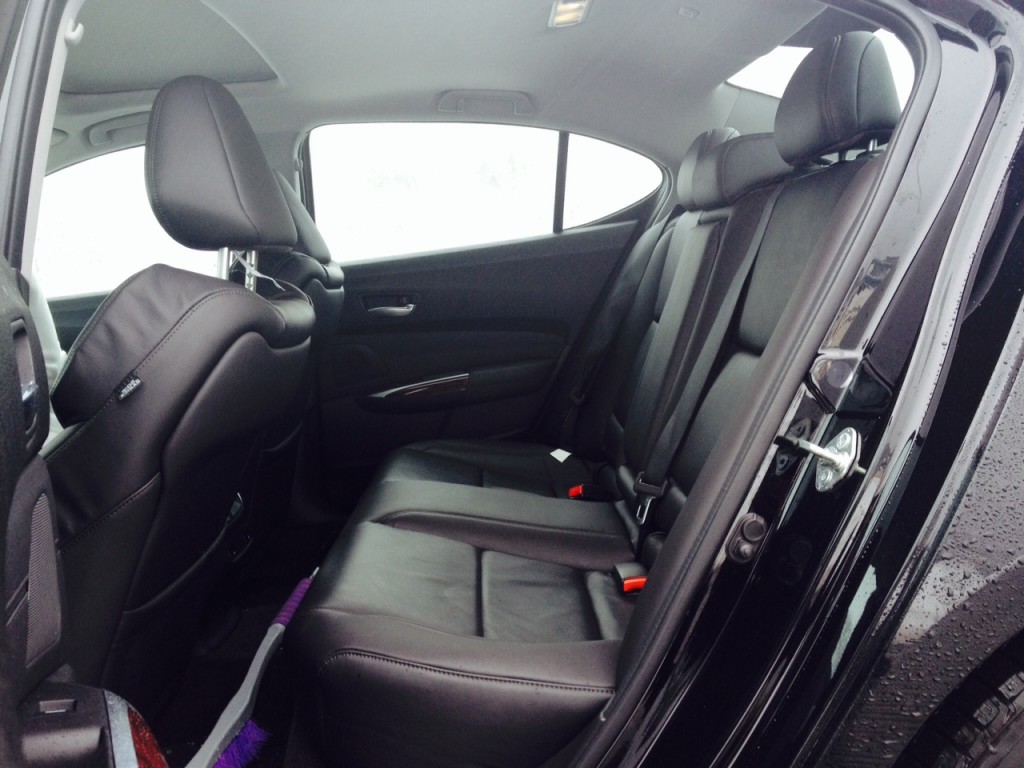 And speaking of the infotainment system, it is fairly complicated to use. You need to go through different menus and sub menus to operate fairly mundane tasks. For instance, if you want heated seats (which I did every single time I got in) you can’t just hit a conventional button. You need to go to the screen, find the heated seat feature, then select whether you want the driver’s side or passenger side heated then select the from the three different stages of heating. It gets irritating to do this every single time you get in the car. It should be noted that there is an ‘auto’ feature with the heated seats which presumably heat the seats based on what you’d like the interior temperature to be. I tried this feature out a few times and found that I preferred to select the amount of heat myself. Besides, you need to take the same steps to set the heated seats to auto so might as well just do it yourself as it won’t save you any time. 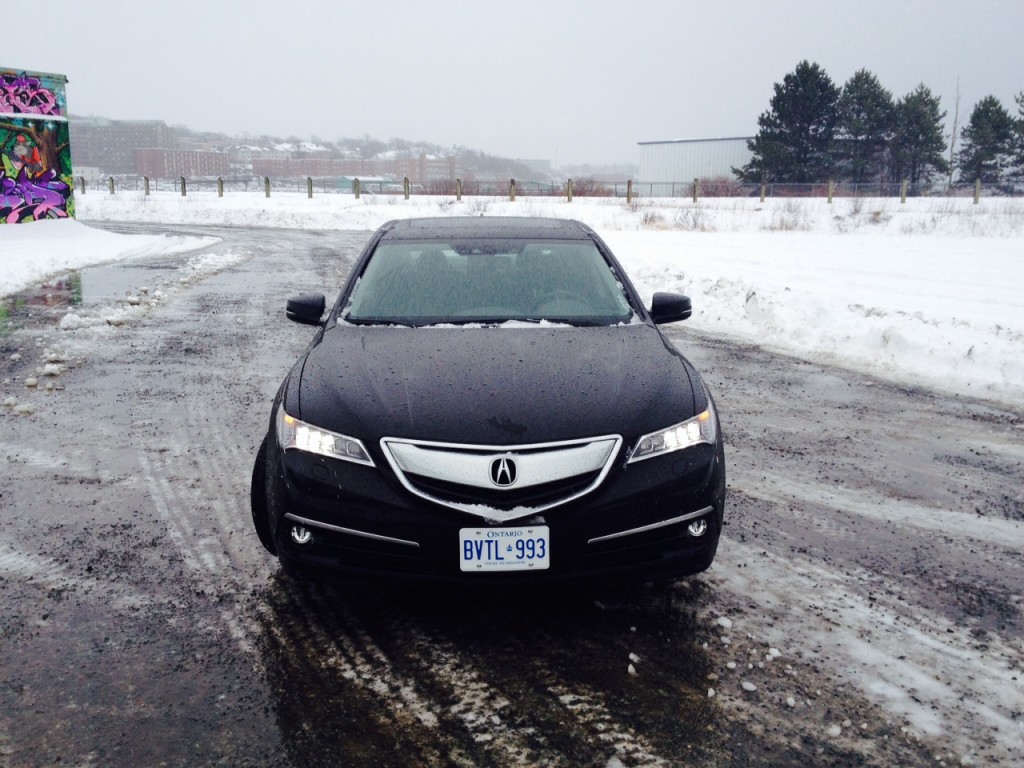 The interior design itself is quite nice though as is the ambient interior lighting at night. Thankfully, Acura has eliminated most of the buttons which made the interior an overwhelming place to be, however as mentioned above, it seems being overcomplicated has been moved to the two screens. 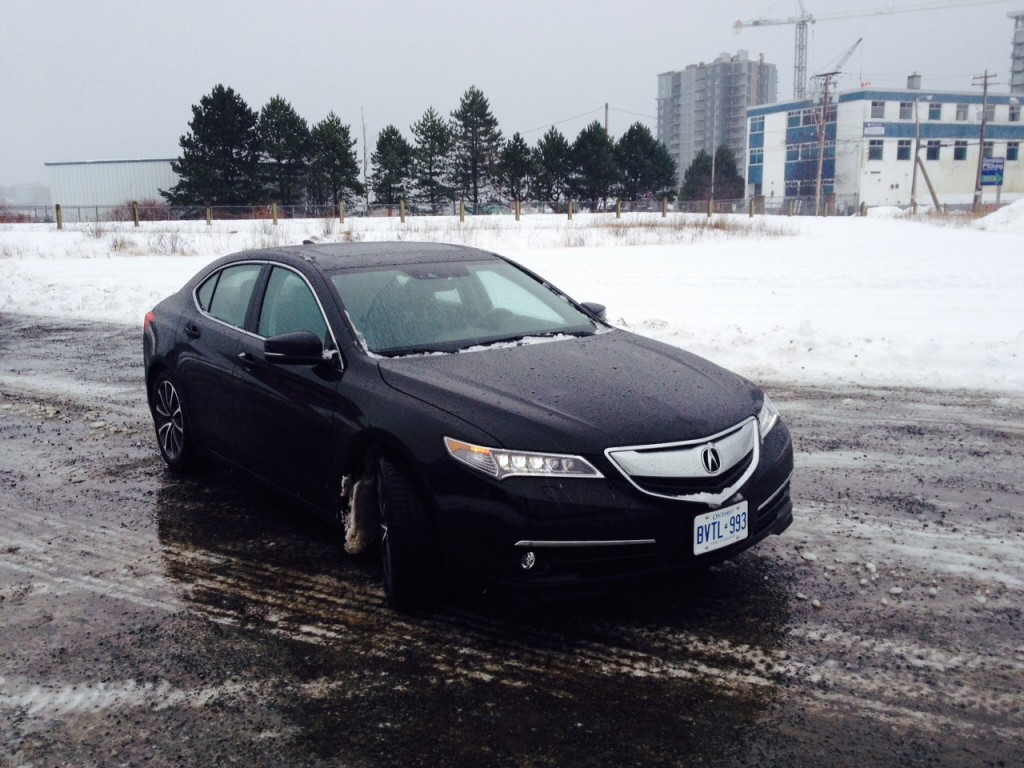 Acura actually offers two different ways of selecting a gear depending on which trim level you choose. If you opt for the 4 cylinder model, you will get a conventional gear shifter. If you opt for the V6, however, the gear shifter gets replaced by a series of buttons instead. Initially I figured Acura did this in order to create more space, but I think they did it because it’s now trendy to do so. In real world operation, the buttons work fine and you do get used to them eventually, however it is definitely quicker and easier to use a traditional gear shift. 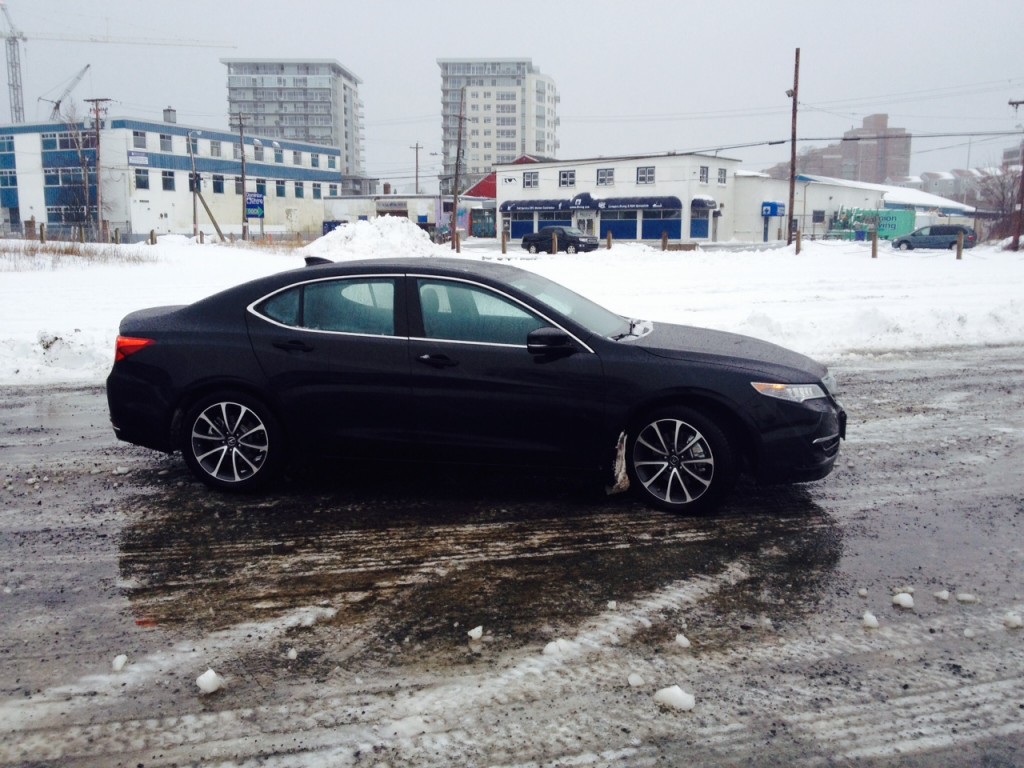 Power comes from a 3.5 litre V6 engine which is good for 290 horsepower and 267 pound foot torque. It’s paired through a 9-speed ZF transmission (4 cylinder TLX’s get an 8-speed automatic). For TSX loyalists, sorry, there is no manual transmission offered anymore. For those of you who may be wondering why anyone would buy the TLX over a fully loaded Accord (aside from the fact that the Accord has dual exhaust tips), the V6 is the only direct injected V6 that Acura or even Honda has available. The end result is a very smooth and powerful engine that has lots of good pull. However, if you are coming from a TL, you may notice that the TLX doesn’t feel quite as powerful and that’s because it isn’t; it’s down on power compared to the TL and up on power compared to the TSX (again, evidence that the TLX really can’t be everything to everyone). 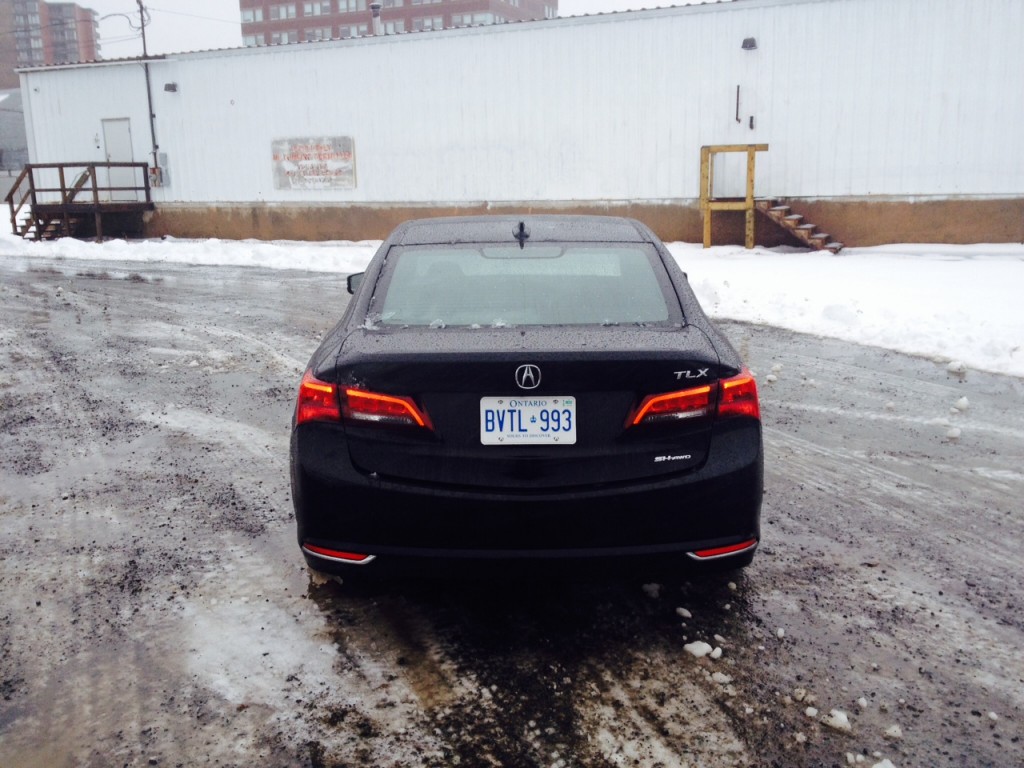 The 9-speed automatic shifts gears smoothly and relatively quickly, however it very much likes to up shift as soon as possible. The reason for this is to increase fuel efficiency, but again, this is a sports sedan, not a Prius. Buyers in this segment expect a certain amount of performance, even in normal driving mode. It’s getting to the point where the amount of gear’s a car has has become the new horsepower wars. In other words, it seems most manufacturers are content to drop the pants on their transmission and break out the measuring tape. This new trend can be beneficial if you do want to save gas, but as I said, if people really wanted to save gas they would buy a hybrid. 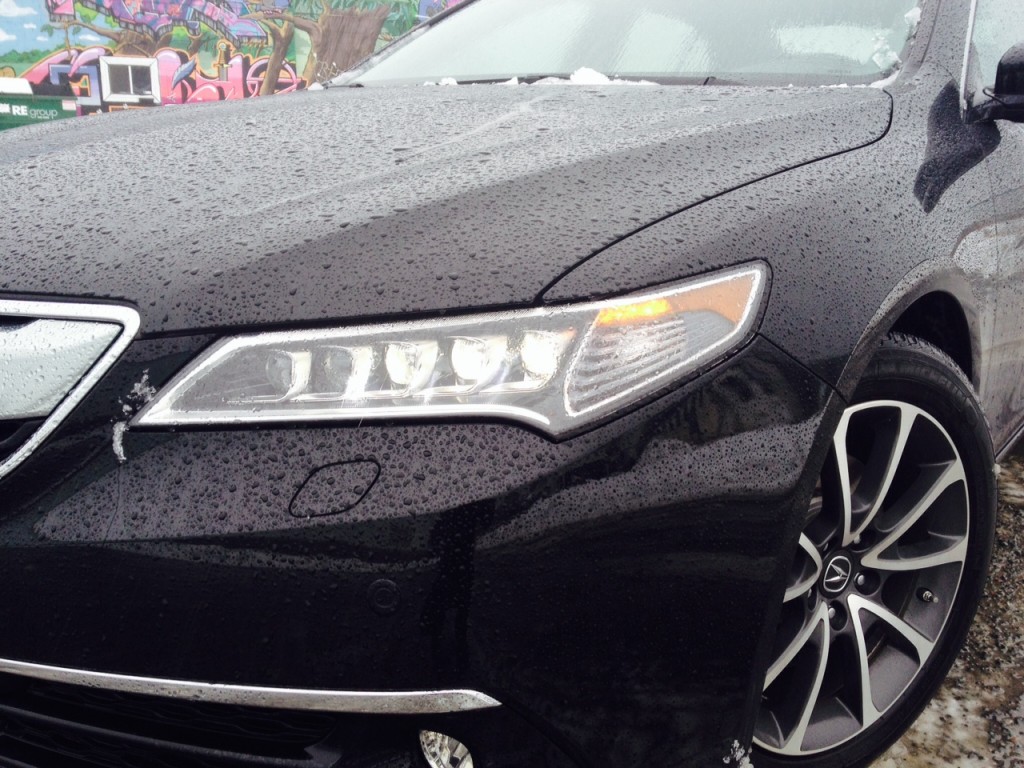 As I just alluded to, the TLX has different driving modes: Econ, Normal, Sport and Sport+. One thing that I must give Acura a standing ovation to is the fact that it will stay in whichever mode you select, even when you turn the car off. So if you choose Sport + and stop for gas, it will still be in Sport+ when you get back in. In some of Acura’s competition, you need to continually select the drive mode you want each time you get into the car which is annoying (cough Lexus cough). And unlike some other systems, there is a noticeable difference between all four modes. Econ mode is for when you want a mind numbing driving experience (and for when you actually want to be environmentally conscious as opposed to “appearing environmentally conscious with your lack of visible exhaust pipes), Normal is decently peppy, Sport stiffens up the suspension and lets loose on the throttle while sport plus gains you access to the paddle shifters and beefs up the suspension even more. Most people will likely be fine with Nomal mode, but Sport and Sport+ are really what makes the TLX a sport sedan. 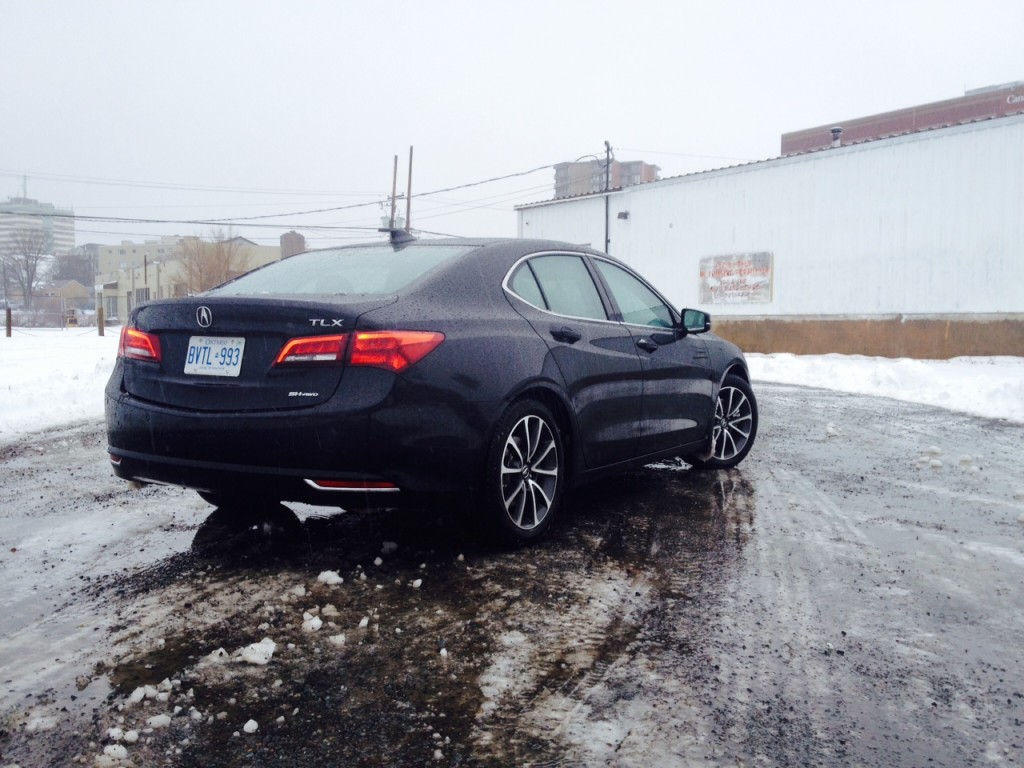 There is a nicely balanced feeling when corning in the TLX, though I would stop short of calling it sharp and precise handling. It does what you want it to do with little fuss, but there is no point and shoot-like steering and the suspension doesn’t feel overly firm, which is actually a good thing. The suspension is actually quite comfortable, yet it doesn’t produce any body roll. Basically the TLX’s handling abilities are perfected suited for every day driving as opposed to a track. A lot of manufactures either try to offer up too much comfort which spoils the handling or too much firmness which is good for the track but not for every day driving. Kudos to Acura for finding the right balance. My tester had Acura’s Super Handling All-Wheel Drive system which proved to be more of a champion in the snow than it was in aiding cornering abilities. This is a tremendous system, tried as I did, I was unable to get the TLX stuck in the snow. 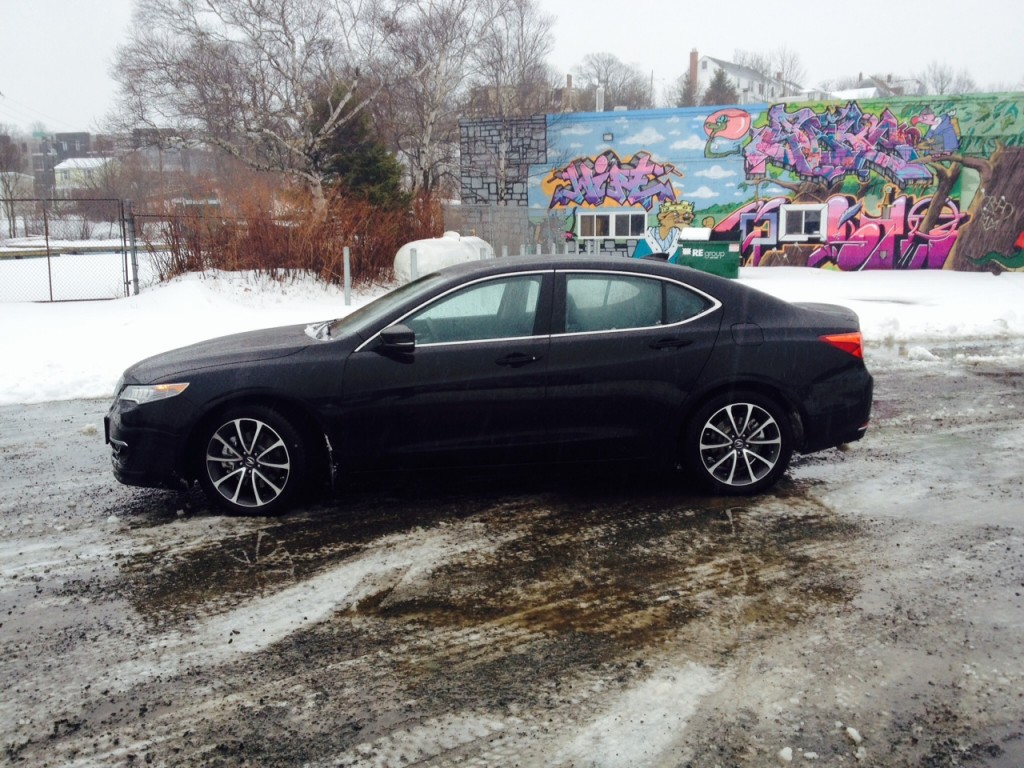 I wasn’t going to even bother mentioning the TLX’s fuel consumption ratings since most buyers likely don’t have it as a top priority but since Acura wants to appear environmentally conscious (if you haven’t already picked up on it, I think it’s ridiculous), the TLX is rated at 11.2 L/100 kms city and 7.5 L/100 kms highway for the V6 model. I averaged a decent 9.5 L/100 kms, and no, hiding the tail pipes had nothing to do with achieving that impressive number. In fact, I kept the TLX in Sport+ mode for most of the time and drove in a spirited fashion. Considering that, the TLX ‘s real world fuel consumption is actually quite good. 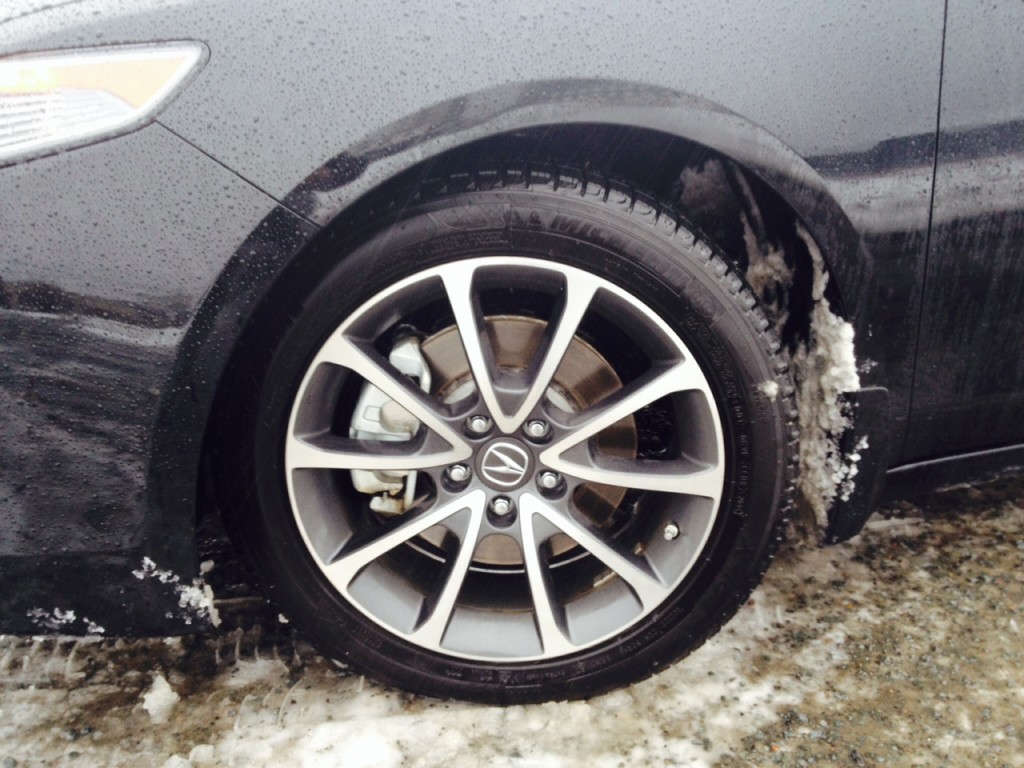 And the TLX itself is actually quite good too. It isn’t as performance capable as its German rivals but it definitely offers up more tech for way less money. And let’s be honest, the TLX can indeed hold its own in terms of performance. My feeling is that those coming from the TSX would likely transition nicely into the TLX but those coming from a TL may find it a bit more difficult. In which case, the RLX may be more up their alley. Stay tuned, I’ll be testing an RLX in the coming weeks to find out. Until then, the TLX is definitely a step in the right direction for Acura. 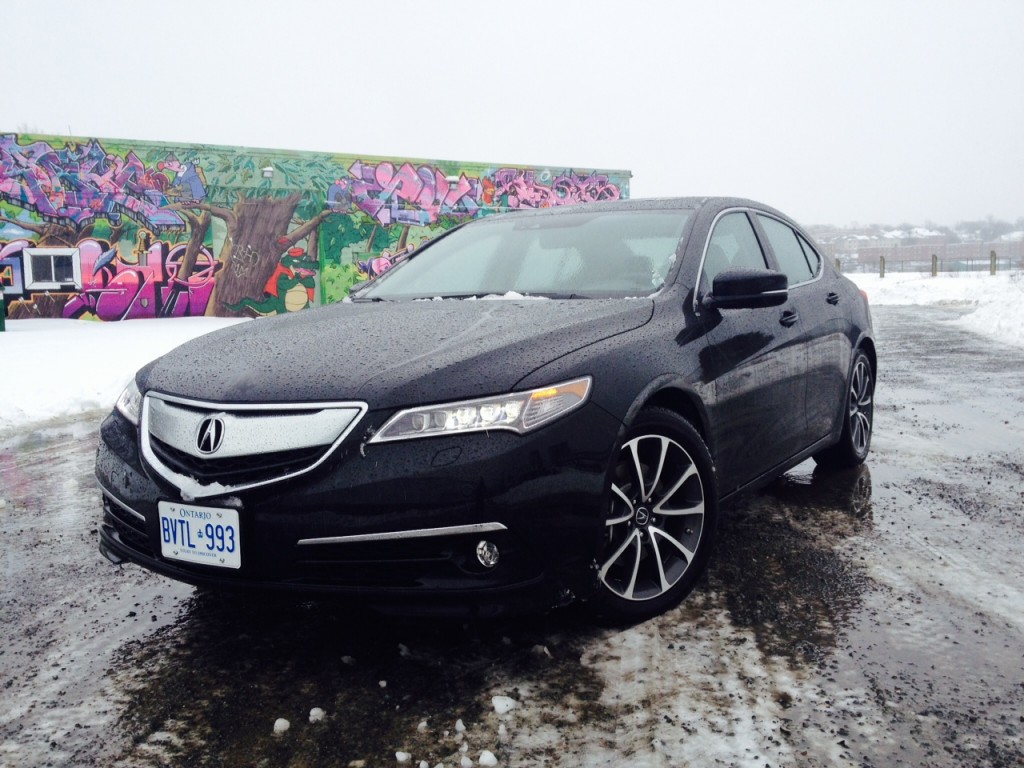