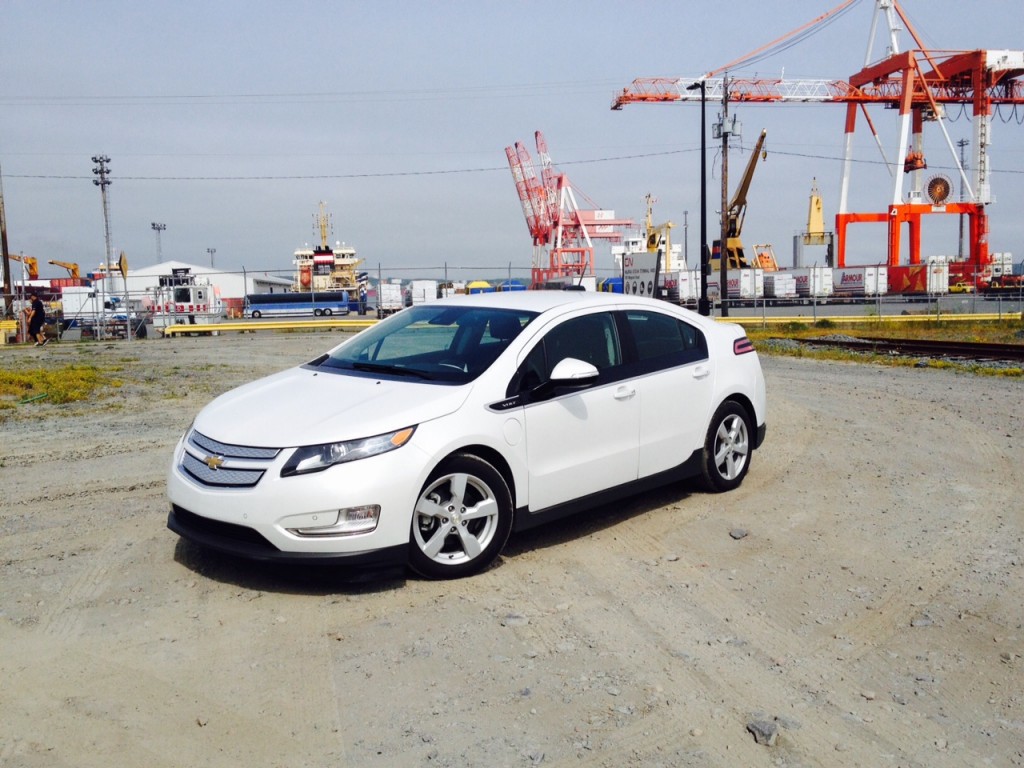 “Worry on the part of a person driving an electric car that the battery will run out of power before the destination or a suitable charging point is reached.

I’m not entirely sure how this differs from the anxiety we all feel when the gas needle is on or below empty in the middle of nowhere, but range anxiety is a big enough problem that auto manufacturers are attempting to come up with potential solutions.

Enter the Chevrolet Volt. It was originally hailed as GM’s savior; a modernized and environmentally friendly product that previewed the future, even though GM was forced into making it by President Obama as a condition on the millions of government loans.

Well the Volt has been on sale for about four years now and a new second generation Volt is on its way soon. It seemed like a good time to revisit the current generation Volt before its life cycle ends. 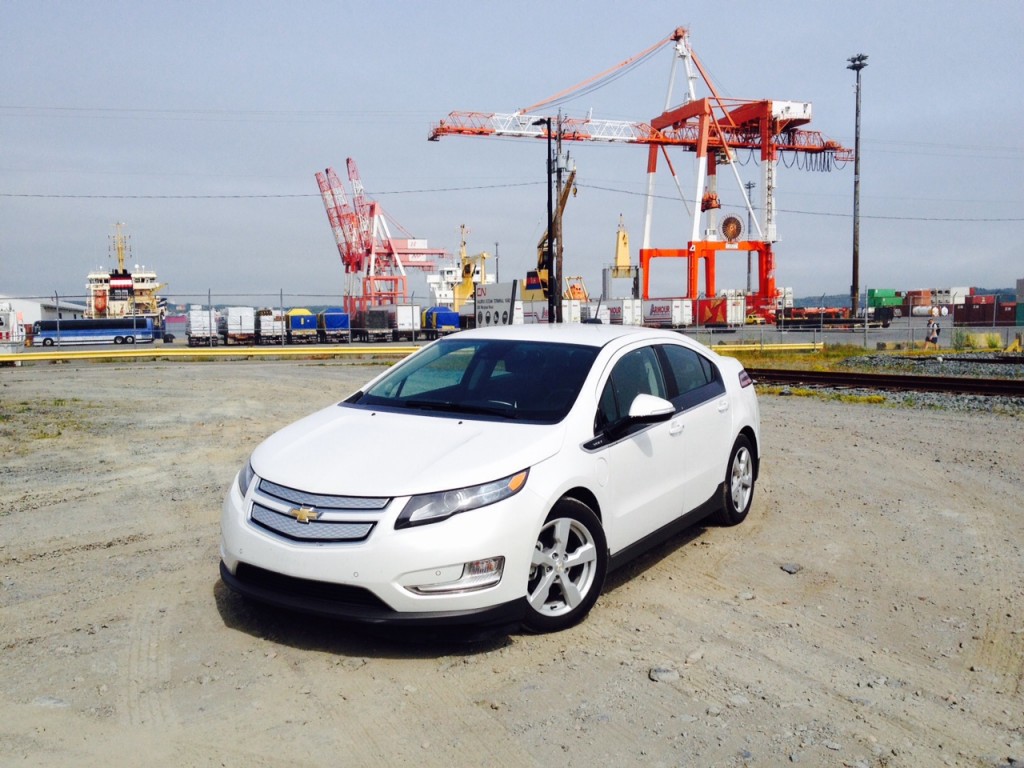 An ex-head honcho of GM famously referred to the Toyota Prius as a “geek-mobile” and noted that he would “never be caught dead in one”. GM likes to tout the Volt’s looks as more aesthetically pleasing. While I would disagree of the assessment of the Prius, it is fair to say the Volt is the better looking of the two, even if the Volt does have a few akward angles itself most notably its side profile. My tester came with $1,100 ‘Iridescent Pearl Tricoat’ paint which helped the Volt to gain a few more stares than it already got, being a fairly rare car in the first place. In the looks department, the Volt gets a B. 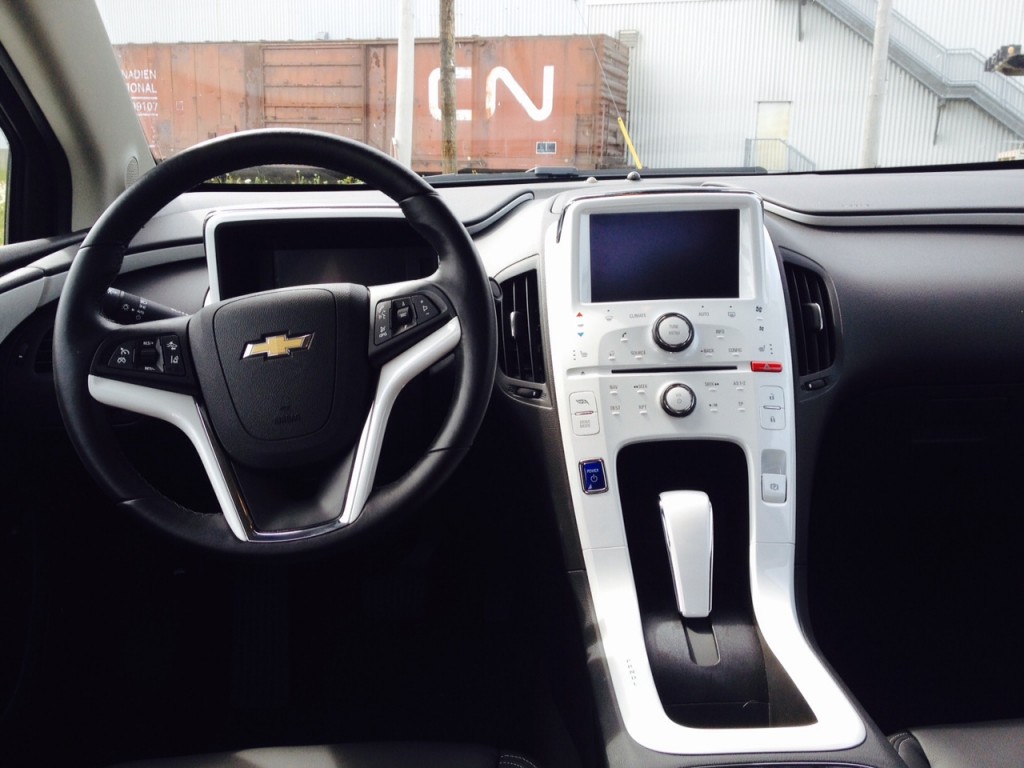 Inside, one of the first thing’s you’ll notice is the big bright white centre stack. I drove a Volt two years ago and remembered thinking that this sort of ipod imitation wouldn’t age well. As it turns out, I was right. Worse still is the fact that the majority of buttons are not conventional buttons, they respond to the touch much in the same way touch screens do. On top of that, the buttons are not logically laid out and they are too small. You have to take your eyes off the road in order to locate where the window defroster button is for instance. And when you do finally locate it, it will take you two to three attempts to get it to respond to your command. Happily, GM has gotten rid of this centre stack for the 2016 model year. If you’re interested in buying a 2015 model year, you can also get it in a more sensible grey as opposed to the obnoxious white. 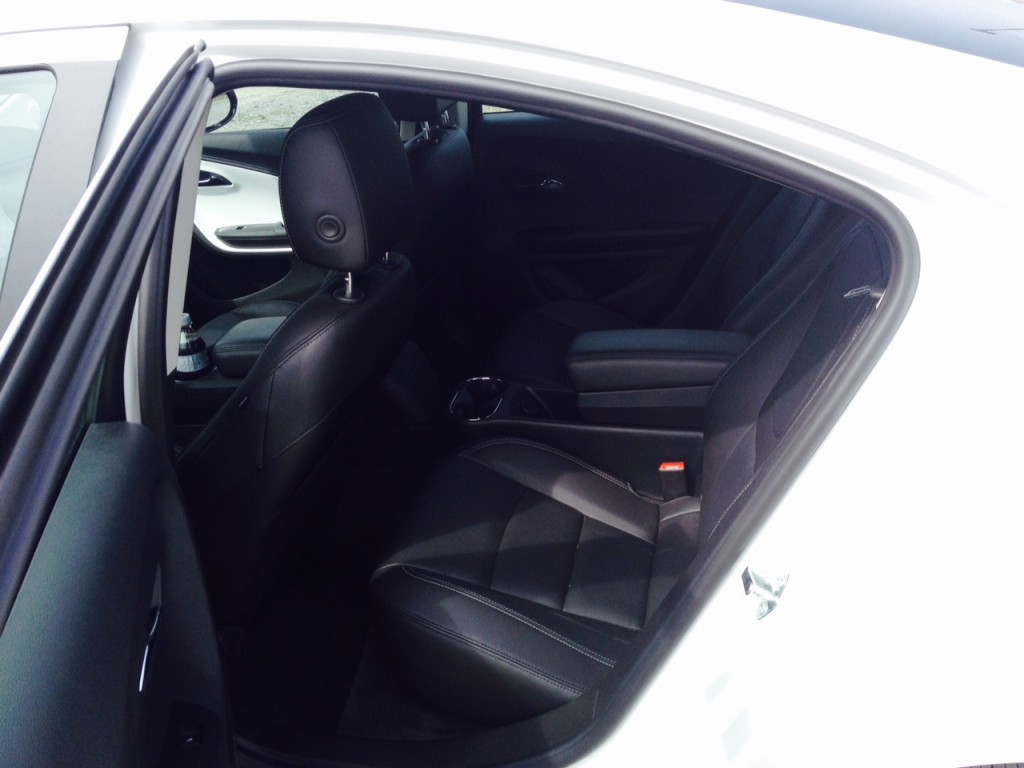 Interior space is quite cramped. If you are at all claustrophobic then you may want to consider walking instead. Due to the Volt’s overall shape, which in fairness is to be as aerodynamic as possible to reduce drag, means you’ll likely hit your head against the frame while getting in. Speaking of aerodynamics, the Volt has a very low chin spoiler to reduce drag as well, but it becomes problematic when entering a sloped driveway as it scraps against the bottom harder than a 16′s lowered and modded Honda Civic would. Luckily the font spoiler itself is made of durable rubber which gives it some flexibility. Back to headroom, rear passengers will get treated to a knock on the noggin as well in addition to very few places to put their legs. The Volt is a four-seater car due to the fact that its battery is shaped like a ‘T’ and runs down the middle of the car. 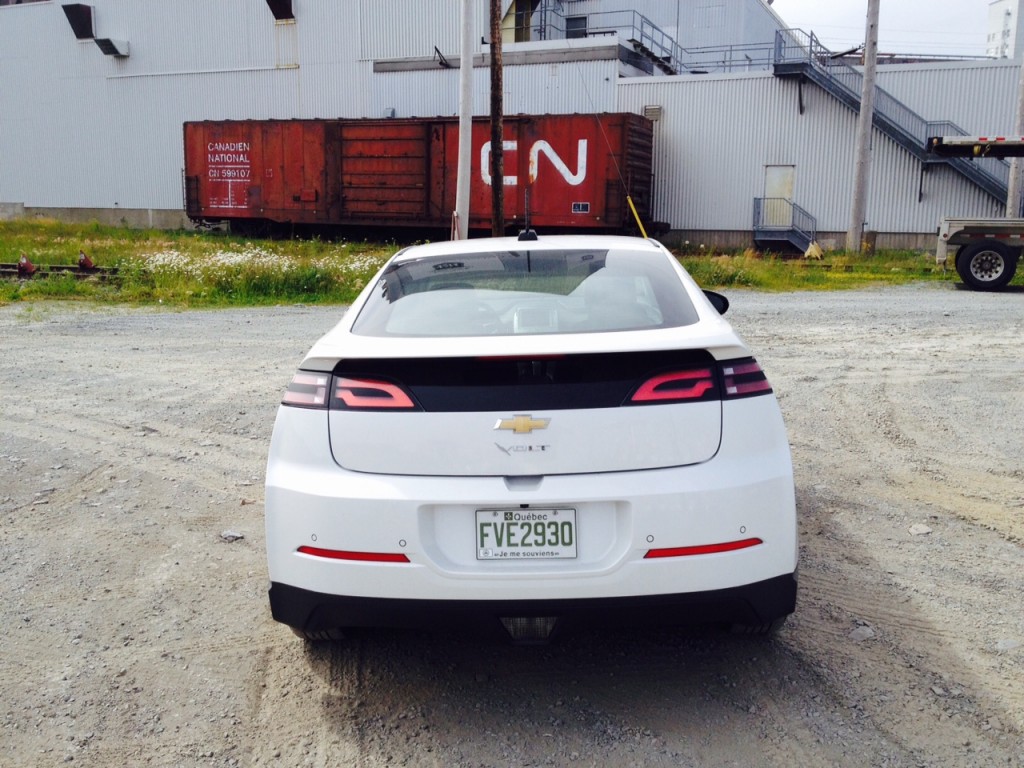 The gauges behind the wheel are all LCD and can house a number of different types of information and efficient driving technique coaching. The latter is accomplished through a green ball which sits in the middle of a set range. When the green ball is in the middle, give yourself a pat on the back because that means you’re driving as efficiently as possible. If the ball moves upwards in the range, becomes smaller and turns into an orange hue, it means you’re driving it like a Porsche and as such, you’re using up more range than you should. If the ball reacts the exact same way but moves itself downward, it makes you’re braking inefficiently. The method works quite well. When you are finished your journey, the Volt will display a report card of your driving. 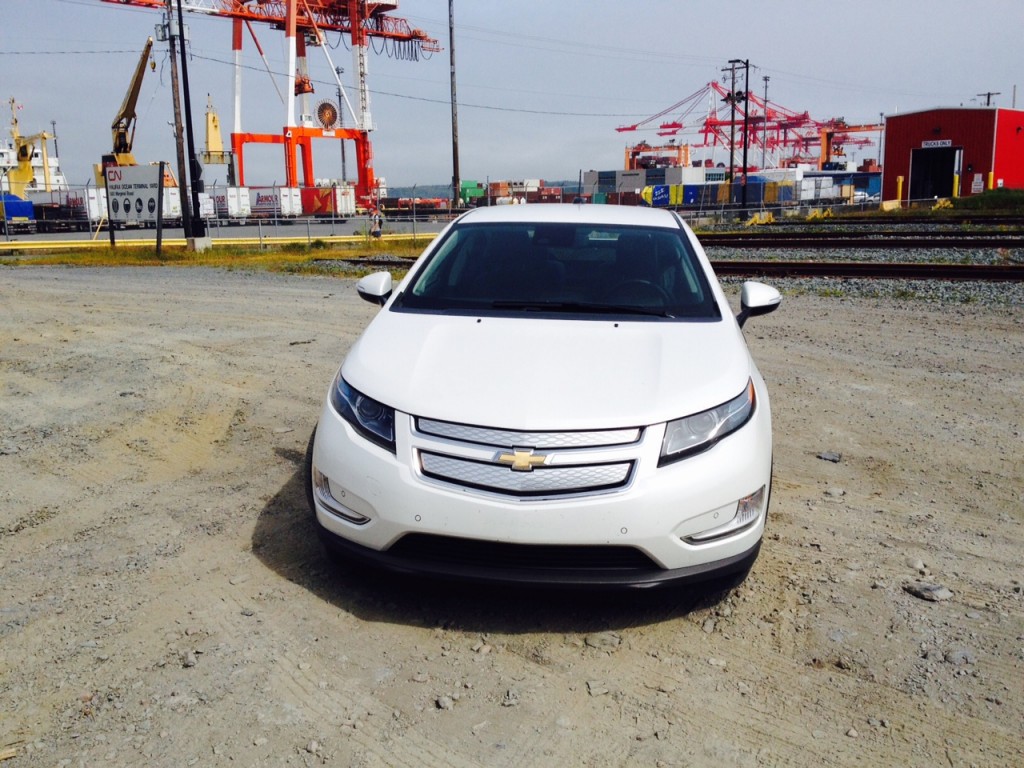 Speaking of driving, the Volt is feels fairly solid and smooth around town and even more so on the highway. There is decent feedback from the steering wheel, but thanks to that large battery, handling isn’t one of its forte’s, though it’s not as wobbly and unstable as you might think. 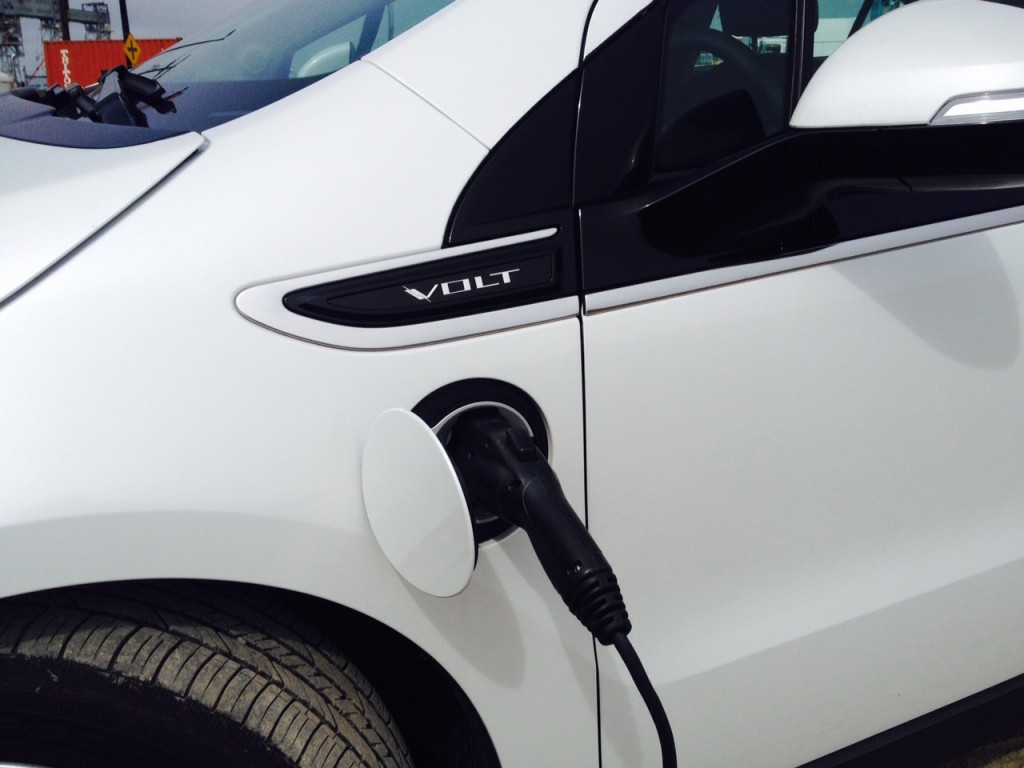 Charging the Volt takes about 14 hours from a conventional outlet, which I didn’t find to be a problem since I work from home and plugged it in to charge overnight. However if you plan on doing more driving in your Volt, you can purchase a more powerful charger which reduces charging time to 6 hours. There are also public charging stations that promise a charge time of just over an hour. 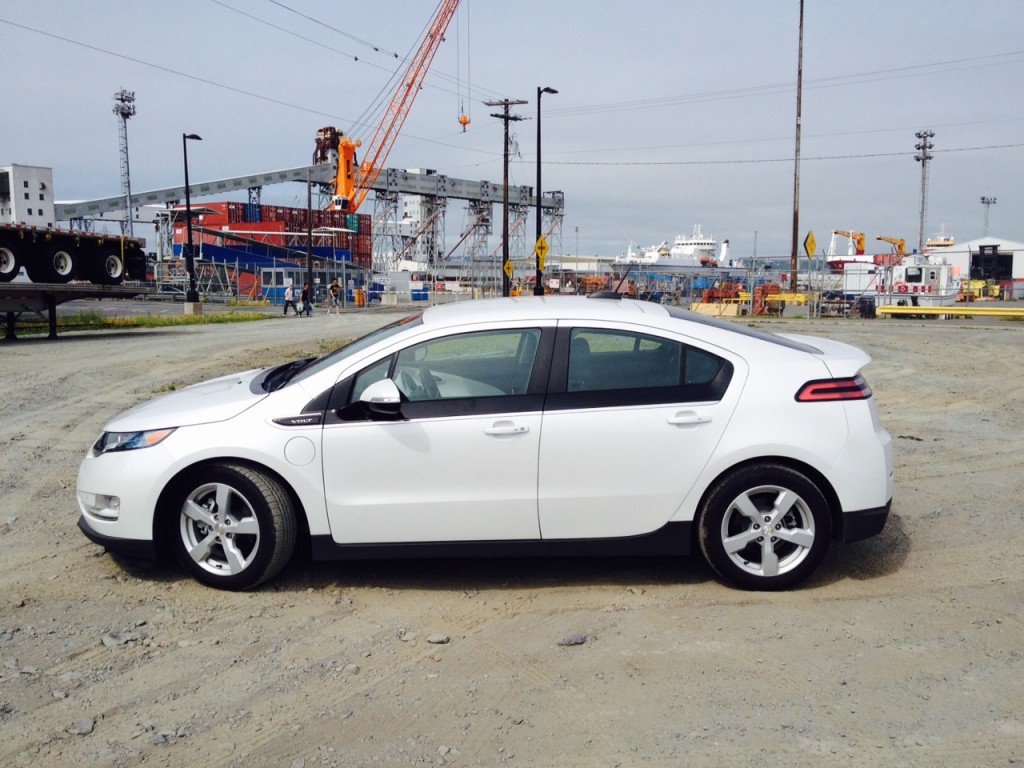 The Volt’s official range is 60 kilometers on a single charge before the gas generator kicks in to give it an additional 450 kilimeters more. The 2015 Volt gets a bit of a bigger battery pack; a 17.1 kWh pack as opposed to the 16.5 kWh pack found in model years before it. While GM does not officially equate the bigger battery with more range, several Volt owners have reported getting better than the 60 kilometer range. And in fact, I noted this as well, being able to go up to 70 kilometers from a single charge at times. This means that, around Dartmouth/Halifax, you could go an entire gay without using any gas from the generator. In fact, it was looking like I was going to spend the entire week with the Volt using no gas at all, but then I forgot that one of the bridges from Halifax to Dartmouth was closed and was forced to take the other bridge, effectively ruining the streak. That did give me the chance to see how the Volt drove while using the generator though. The switch from electric to the generator is extremely seamless, in fact, the only indication that is has done it is it will let you know on your LCD screen. The generator can get loud at times, however, creating a weird industrial-like buzzing sound, but a crank in radio volume solved that problem. 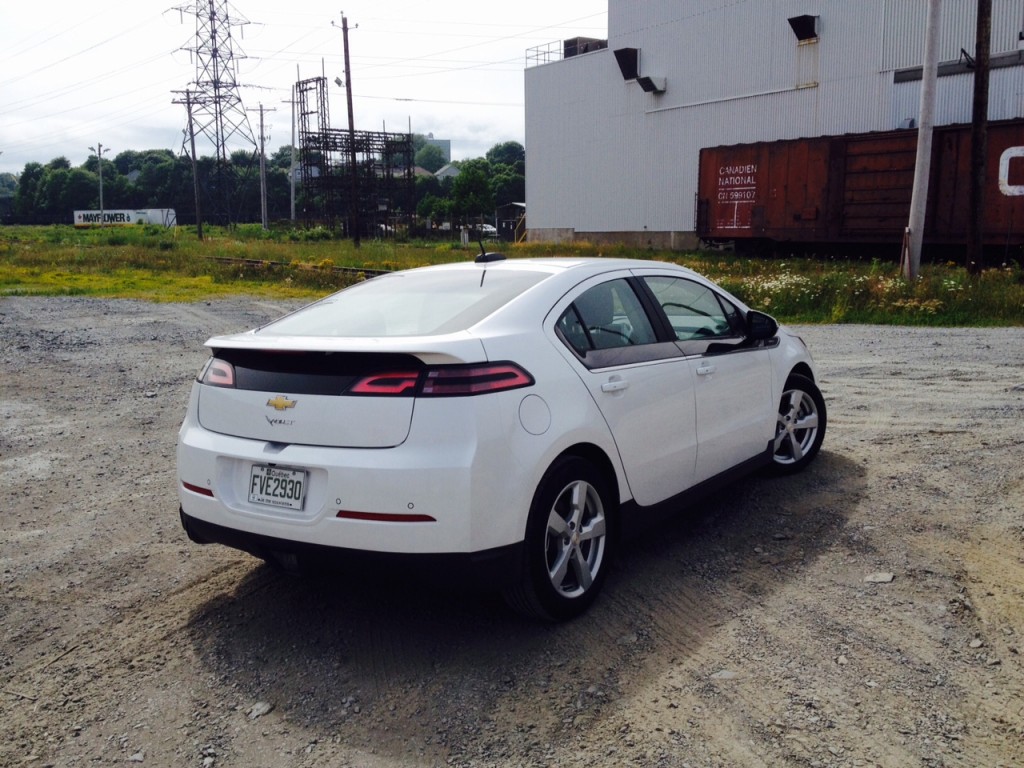 And indeed, the Volt as a concept has, in a way, solved the issue of range anxiety. The electric Smart Fortwo that visited the Car Driven garage a few months back, had to be shipped up in a trailor to my colleagues in New Brunswick for their review, for instance. The Volt can make the journey without any fuss. The downside? Well, you will still use gas and on top of that, the Volt takes premium gas only. For most people, the whole point of considering an electric car is the appeal of using no gas at all. 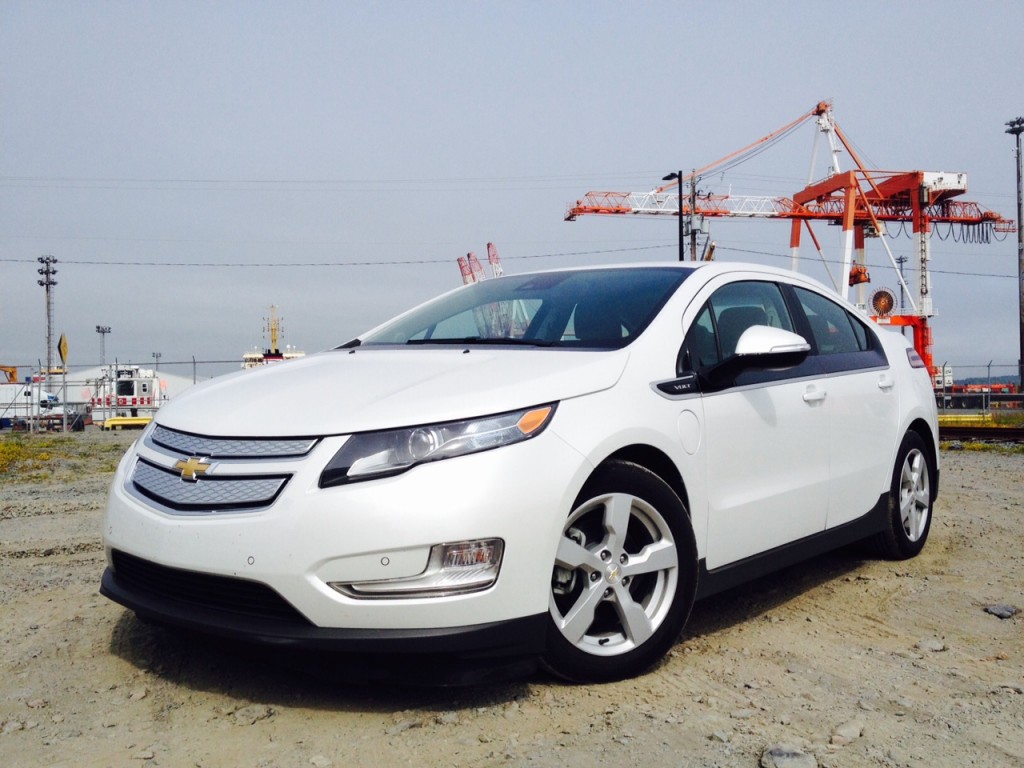