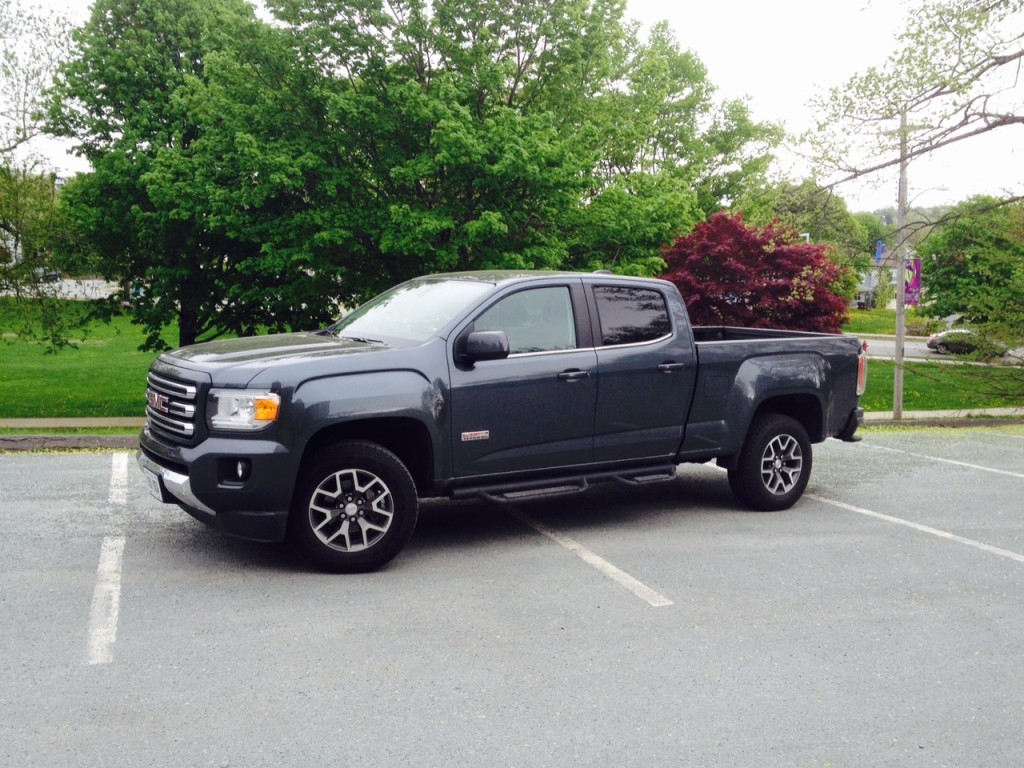 There was a bit of a problem that happened in the late 2000′s. A lot of manufacturers who offered mid-size trucks, in addition to half tonnes, were seeing some major sibling rivalry going on.

The issue? An over stock and deep incentives on half-tonne pick-up trucks became so good that it didn’t make sense to buy a mid-size truck over the larger and typically pricier offering.

It’s a bit like buying a seat from an airline and realizing it would only cost you $20 more to upgrade to first class. Most people wouldn’t even think twice.

As a result, all the bigger brothers won their respective sibling rivalries. RAM vs Dakota? No chance for the little guy. An F-150 vs a Ranger? Ha! A Sierra vs a Canyon? Well let’s just say if you had to choose between an ice cream cake from Dairy Queen and a cup cake, the answer would likely be obvious.

So, following their domestic rivals, GM pulled the plug on their mid-size offerings from both the Chevrolet and GMC brands essentially leaving the mid-size truck segment all to Toyota and Nissan. This essentially meant that the two Japanese brands could sit back and relax knowing they didn’t have to do much in order to entice buyers as the competition was now almost non-existent.

They added a minor facelift here, integrated a new colour option there – nothing big. But while they were putting about as much effort into revitalizing their mid-size truck offerings as voters put into voting, GM was quietly working on a compact for their smallest truck offering.

And here they are. Er, well here is one of them, the 2015 GMC Canyon. Was it worth the wait? I took one out for a week to find out. 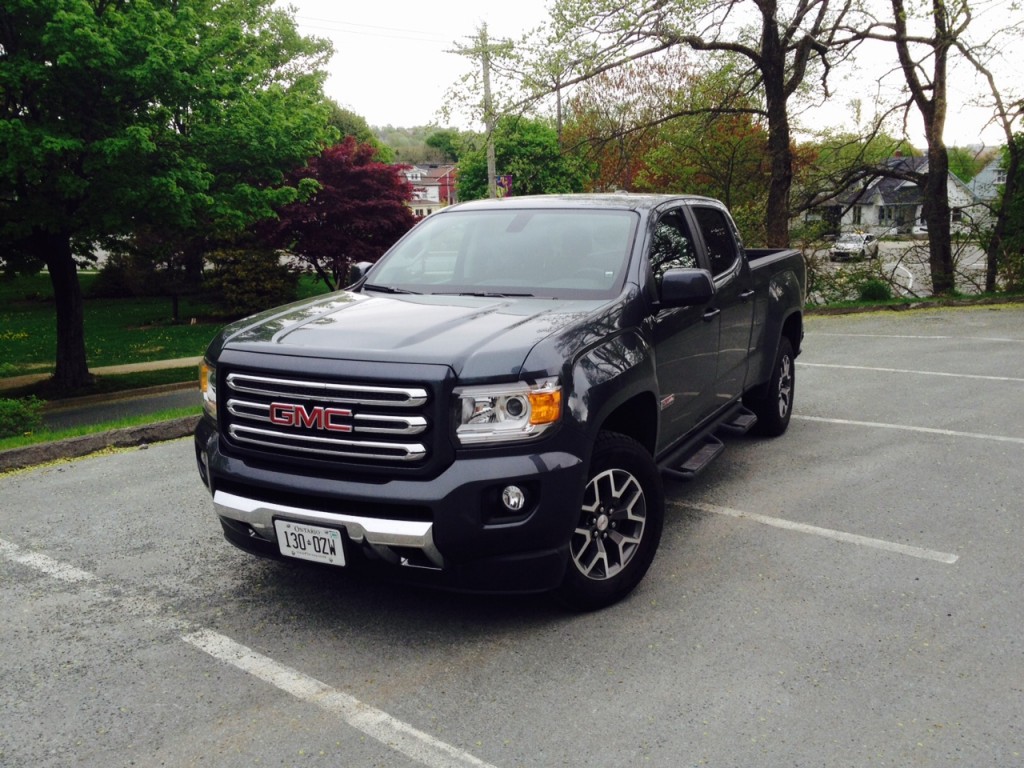 The reintroduction of the Canyon sees a lot of similarities over its big brother, the Sierra. With almost identical looking headlight and hood designs, the only real way a non-truck aficionado could pick one out in a crowd is by the unique grille. My tester’s mid-range SLE model, which included the all-terrain package ads step bars that look a bit ridiculous compared to the single chrome piece step bar on the Sierra, and rather nice looking optional 17-inch wheels that mimic those found on the SLT trim level on the Sierra. Out back you’ll find a simple looking tail gate with simple looking clear lensed tail lights. It isn’t until you lower the tailgate where you see the massive GMC logo embedded into the front portion of the bed liner. Fun fact, the Canyon’s twin, the Colorado, does not have the Chevy logo embedded into the bed liner. The more you know! But overall, it’s a good looking truck that looks the part without much argument. The Colorado has a more distinctive look from the Silverado and would likely be considered to have the sportier styling when compared to the Canyon. At the end of the day, no matter which you choose, you’ll end up in a good looking truck. 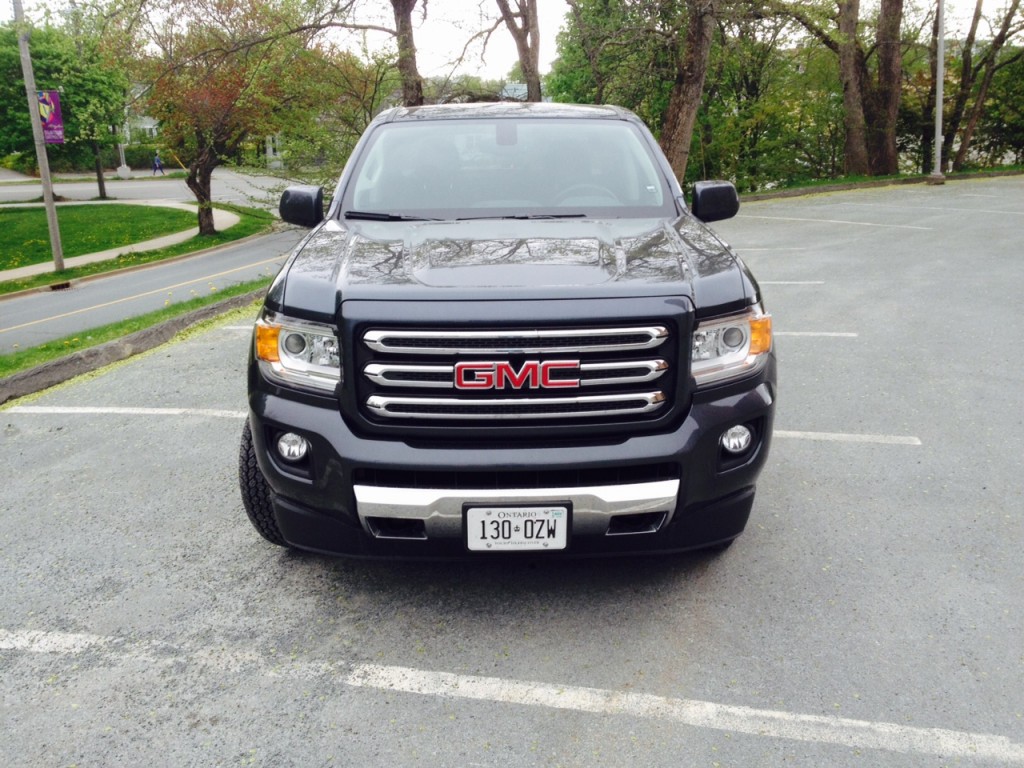 It should be noted that if you do not like anything on my tester, it can be configured about a million different ways. You can take your pic from 2WD versions, to 4-cylinder versions, to long-bed versions and on and on. GM really does like to give their customers the power of choice when it comes to trucks. And yes, you can even get a manual transmission, though in limited combinations. 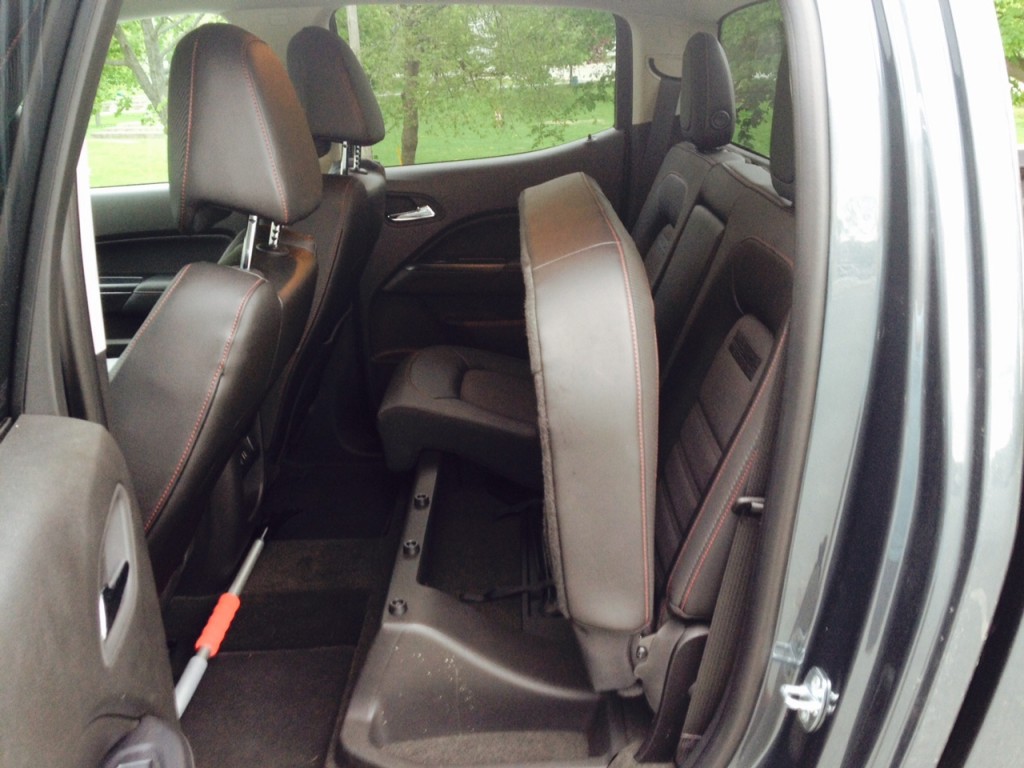 Inside is probably one of the nicest cabins I’ve seen inside a truck in a long time. The feel seems to be more focused on premium rather than feeling rugged and truck-like. Quality materials are in abundance and the dash layout is excellent, with most controls being operated through GMC’s Intellilink system. As far as infotainment systems go, this one is quite good at responding to touch screen commands.  One thing I wish the Canyon had, which the Sierra does have, is a column shifter. There’s just something so satisfying about parking a pick-up truck that has a column shifter in park. I can’t explain why which leads me to believe it might be a guy thing. But I digress. 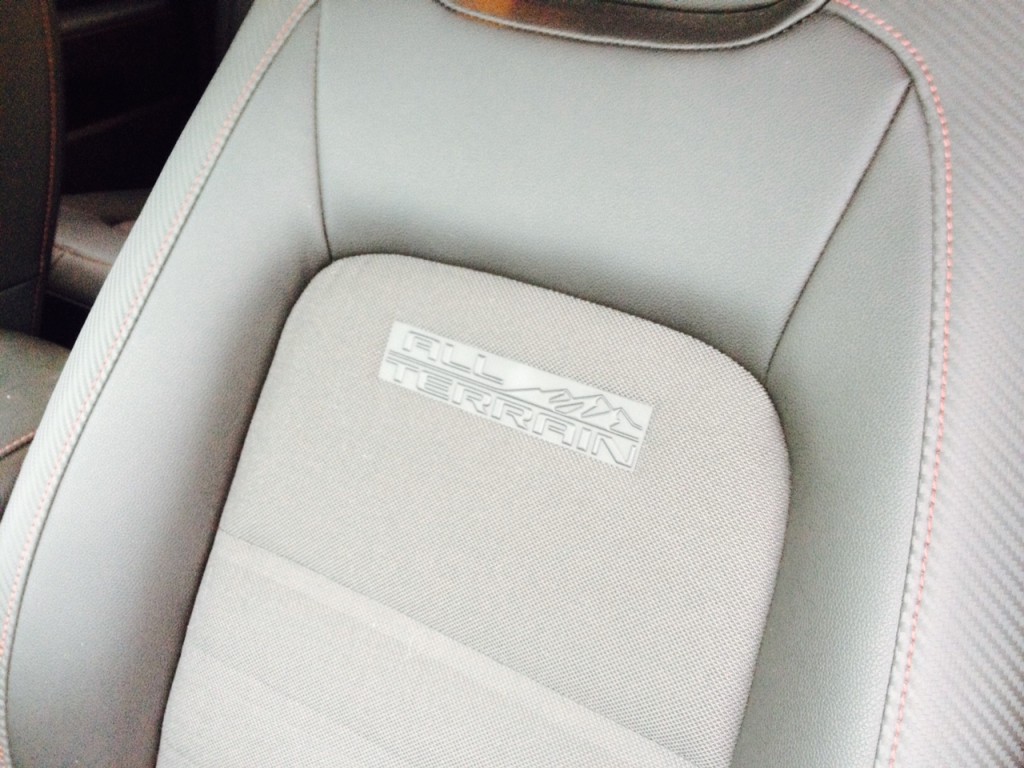 Thanks to the crew cab configuration fitted to my tester, rear seat passengers are treated to ample amounts of room in addition to the high quality materials found up front. The bottoms of the seat cushions can fold upward, not unlike the way the Honda Fit does it, allowing more cargo space, especially for taller items. Getting in and out is a breeze thanks to doors that open wide, along with the stupid looking step bars. Yes, they look dumb but they work. And I promise this will be the last time I mention them. Maybe. 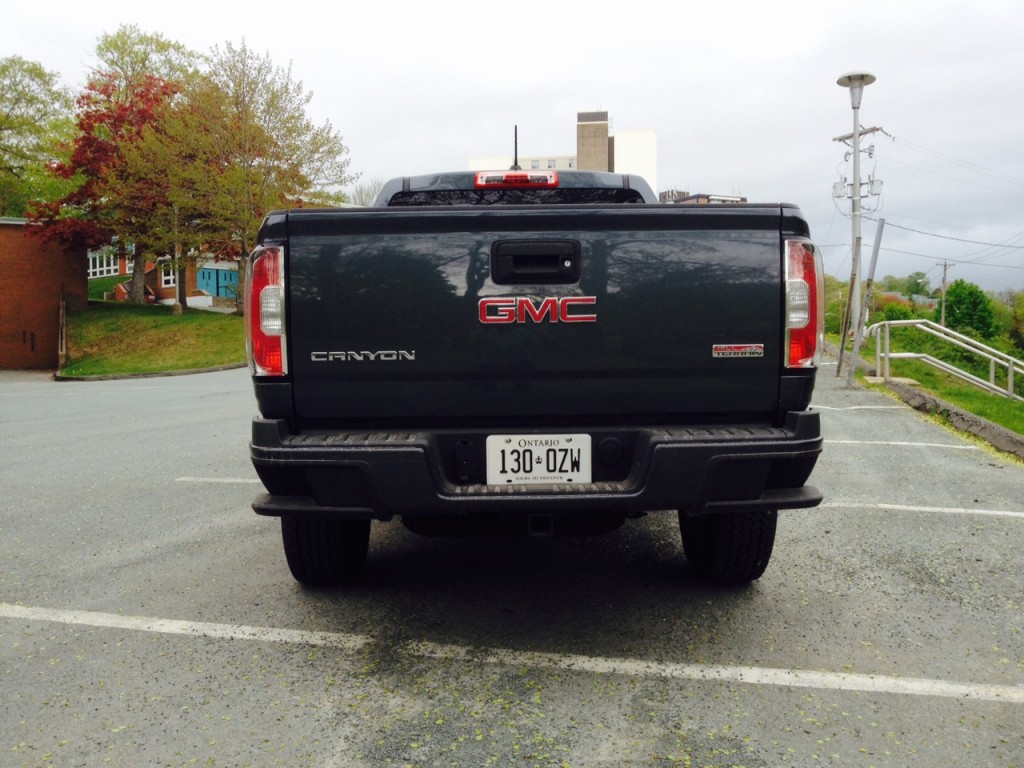 My tester was equipped with a 3.6 litre V6 which is good for 305 horsepower and 268 pound feet of torque mated to a six-speed automatic. Again, not to take away from the “truckiness” of the Canyon, but this engine and transmission combo is quite good, mostly due to the fact that they work seamlessly to provide a smooth and comfortable ride. Match that with the Canyon’s relatively small mass and you’ve got yourself a comfortable and easy to drive truck for popping around city shops. I say relatively small, because my tester’s crew cab configuration means it still takes up the entire length of most mall parking spaces. But compared to big bro, it is much easier to maneuver city streets. 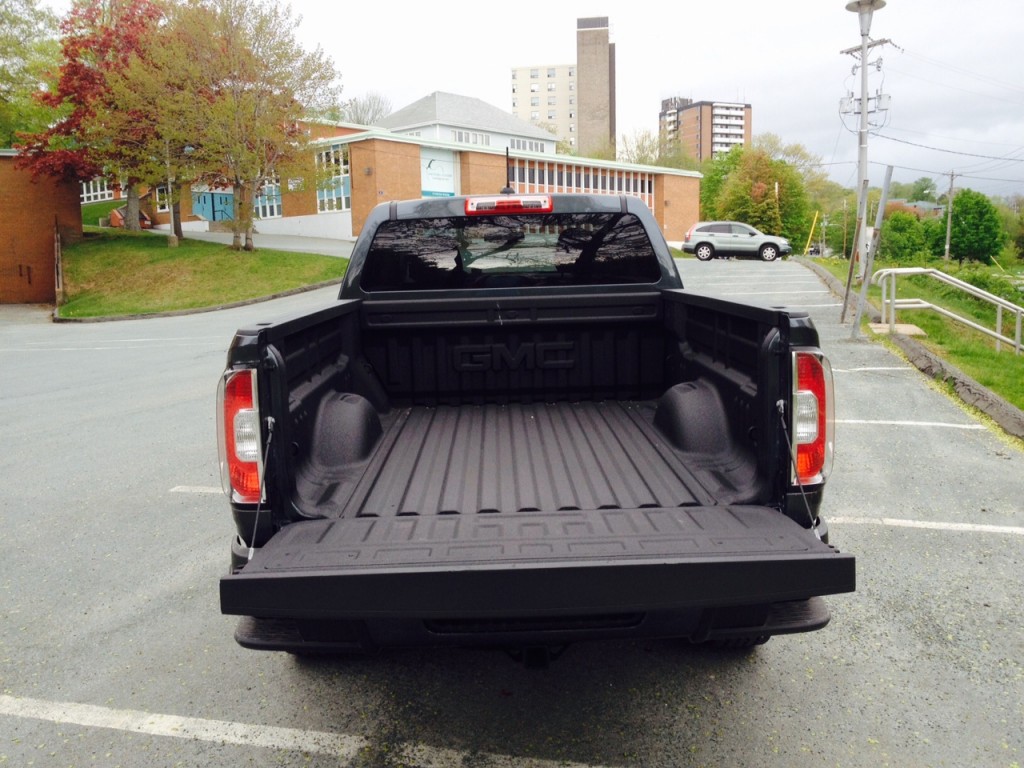 But don’t assume for a moment that the Canyon has gone soft in its great comeback. Payload for my tester is 1,470 pounds. You can even extend that to over 1,600 pounds if you configure your Canyon right. When equipped with the V6, the Canyon is also happy to tow up to 7,000 pounds. The all-road package adds to the Canyons capability by adding off-road suspension, hill-descent control and skid plates just to name a few. 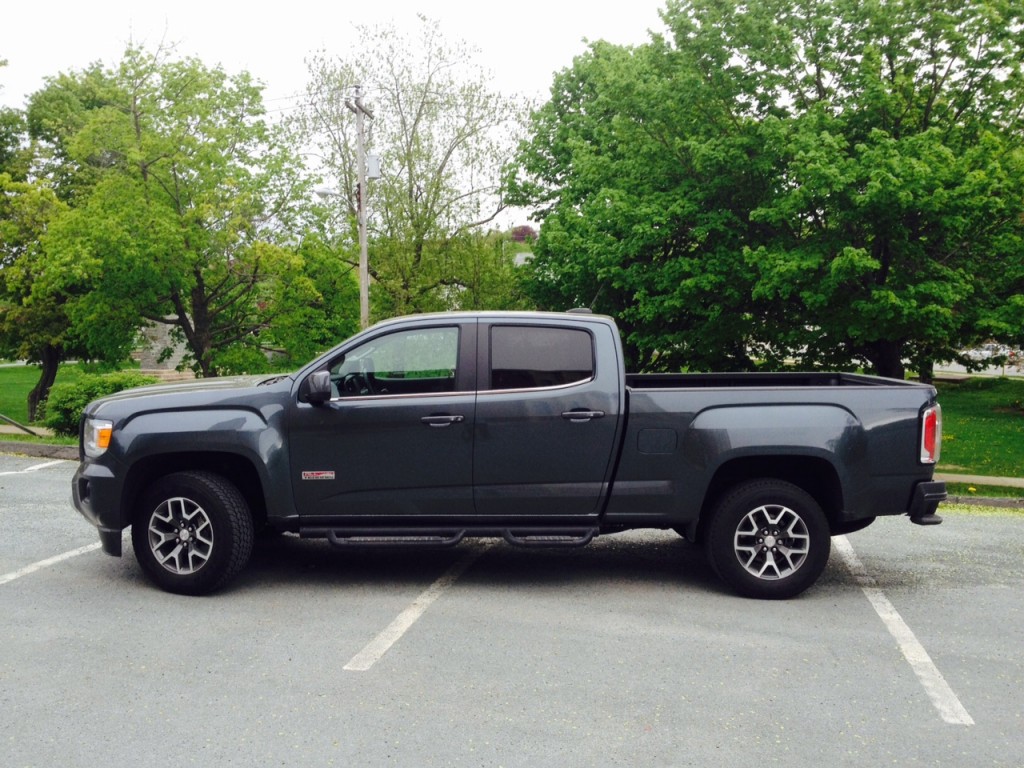 Despite this, it’s easily the quietest and most comfortable of all the mid-size pick-ups, which I suppose isn’t hard to do considering the lack of competition and the lack of enthusiasm to modernize the offerings within the Canyon’s competition. 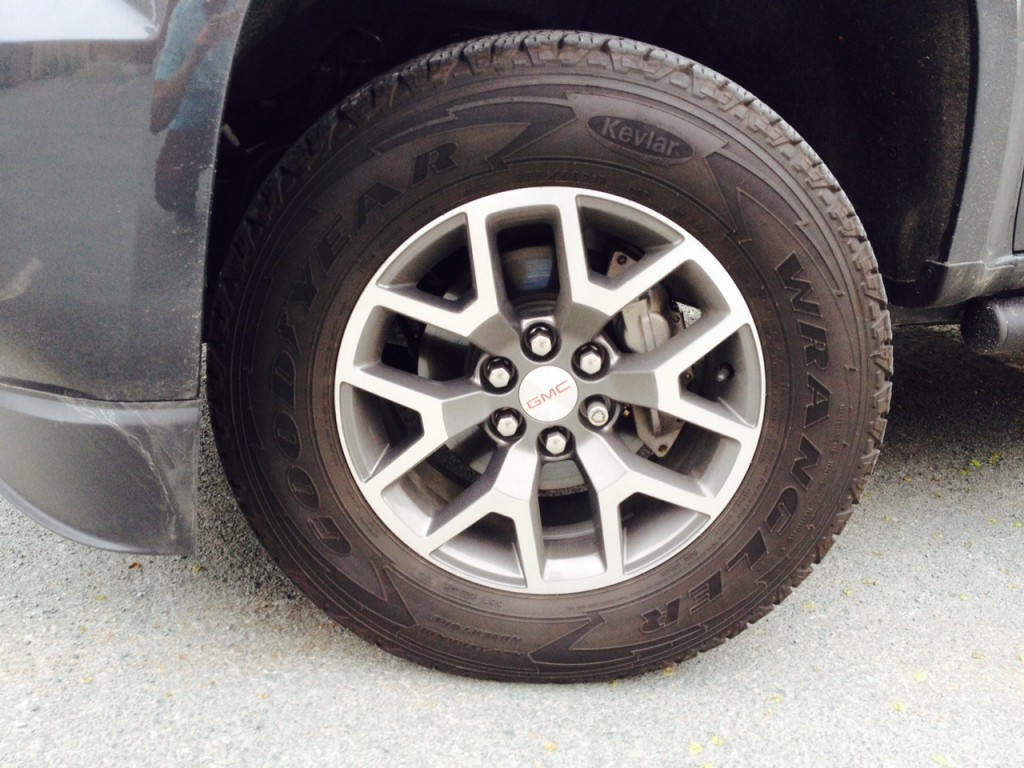 But is it worth getting one over the full-size Sierra, which is a technically more capable truck? Well, assuming you can no longer get your Sierra for as much more slightly more than a Canyon, then yes, it is. Even though it’s only slightly smaller, it still is a lot more maneuverable, it’s more comfortable, it’s technically better on gas and is just as good looking.  But then again, you also have to compare it to the Colorado which is extremely similar but it does have a few unique elements that could appeal to different types of consumers. No matter how you dice it, GM has made sure to keep the list of trucks on your list within the family. And at the end of the day, no matter which you choose, you’ll likely walk away from your local GM dealership happy. 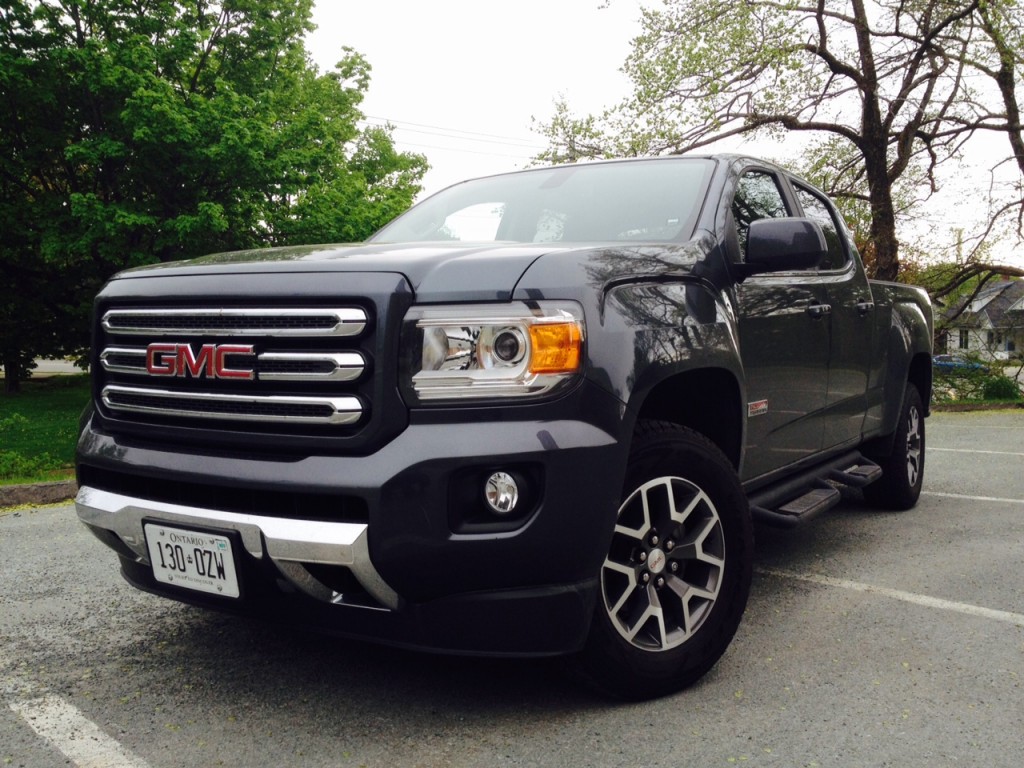