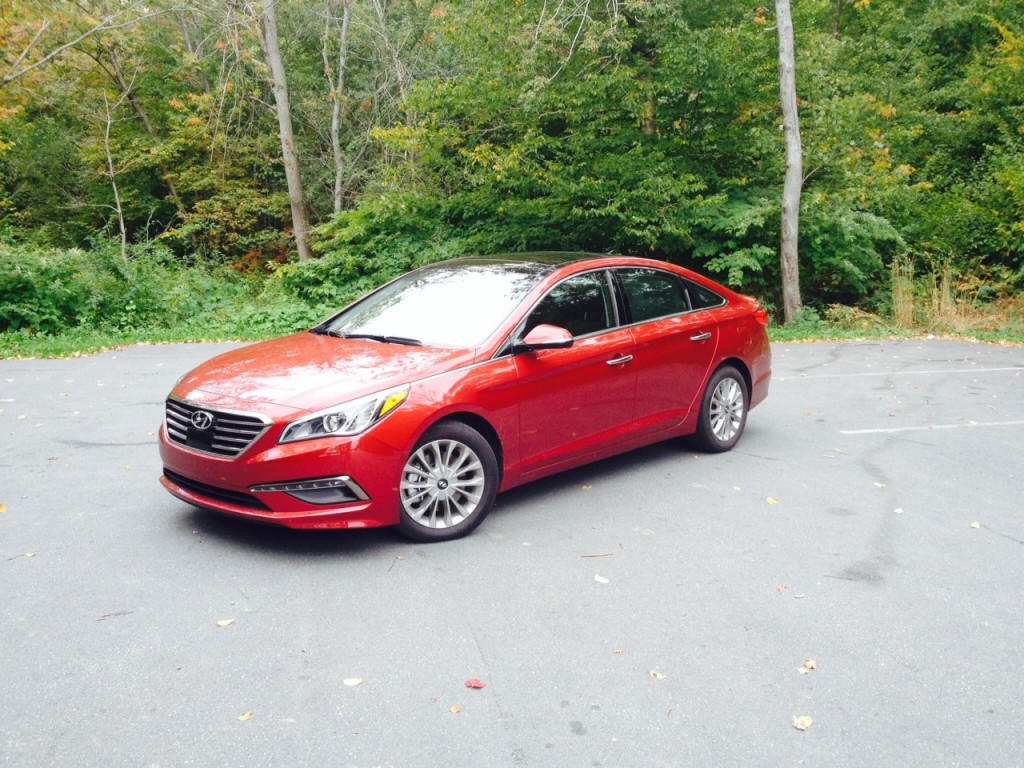 You may remember my review of the Sonata 2.0T posted a few weeks back. The pros going for it included a much nicer interior, loads of goodies standard and low-end torque thanks to the upgraded (and de-tuned) 2.0 litre turbocharged motor.

Thing is, most people won’t experience that motor at all. Its availability relies you to choose  the top two trim lines at a pretty penny. The motor most people will experience will be the 2.4 litre found in the rest of the line up.

The 2.4 litre can be had within five of the seven different trim levels (yes, Hyundai likes to give you lots of choice). The one I tried for the week was the ‘Limited’ trim which, at 34 grand, is a trim level you likely won’t see on the roads too often, however in true Hyundai style, its value is still undeniable.

What’s it like for every day drives? Let’s find out. 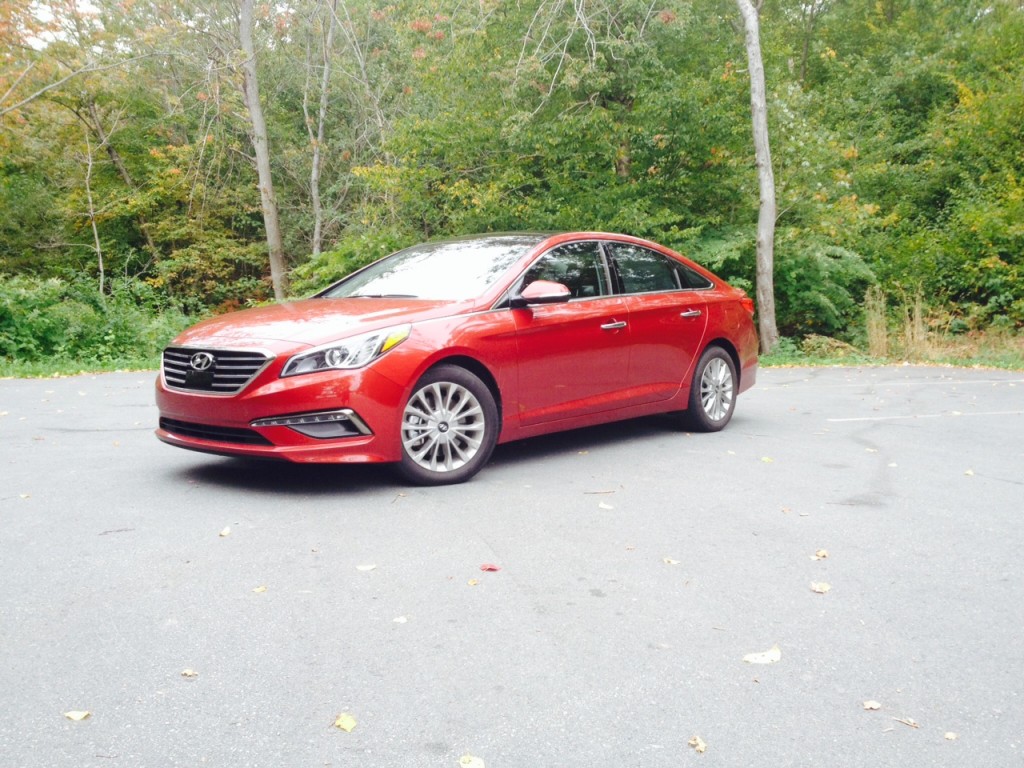 Style-wise, the Sonata will likely offend no one, though it has definitely been toned back from the swoopy lines of its predecessor. The large low LED daytime running lights give it road presence as does the unusual (for Hyundai, anyway) amount of chrome splashed throughout. The multi-spoke 17 inch wheels were described as ugly by some, however I think Hyundai was aiming to achieve the multi-spoke design found on most uber luxury vehicles. Personally, I think it could work if they were a bit bigger. Things wrap up in the back with LED tail lights. This design will age much better than the old swoopy design, so kudos to Hyundai designers for putting a bit of forethought in this time. 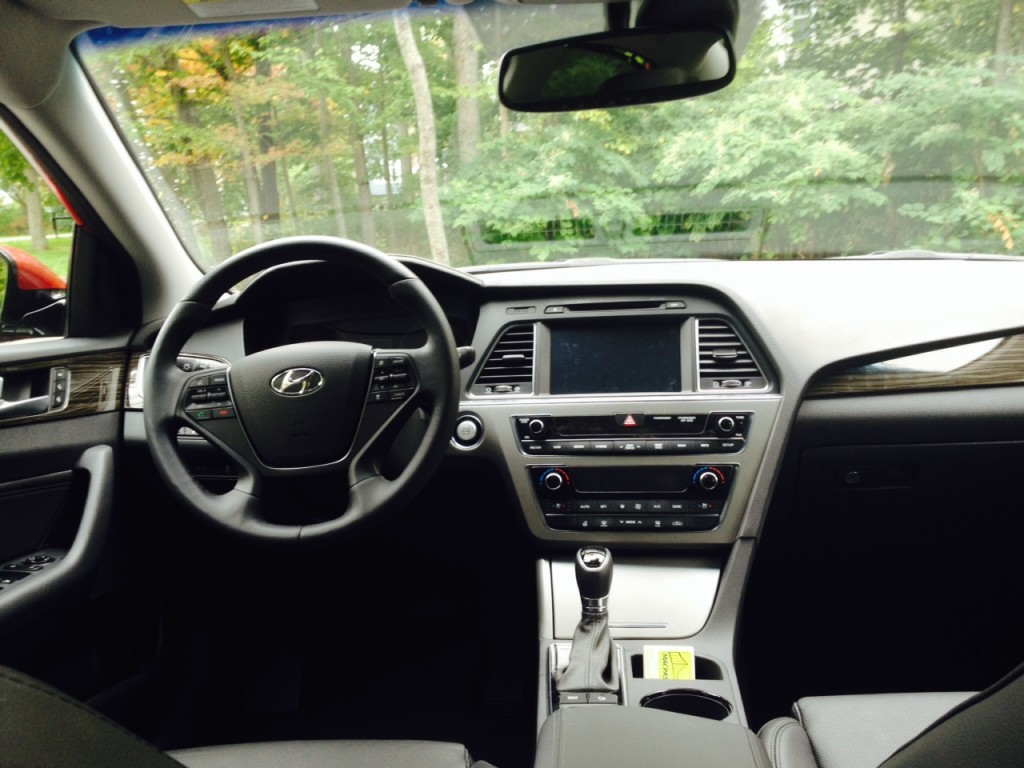 Inside is still a rather nice place to be. You don’t get the three spoke flat-bottom steering wheel found in the 2.0T, or the exterior colour matching stitching on the seats, but otherwise everything is fairly similar which is a good thing. The layout is much improved over the old Sonata and is much more Genesis-like which, if you’ve read my review, is very much a good thing. Everything is located where you’d expect them to be, and the look exudes class. My only gripe is the volume and climate control knobs are identical and placed in close proximity to one another so it’s easy to accidentally turn up the heat instead of cranking your favourite jam. 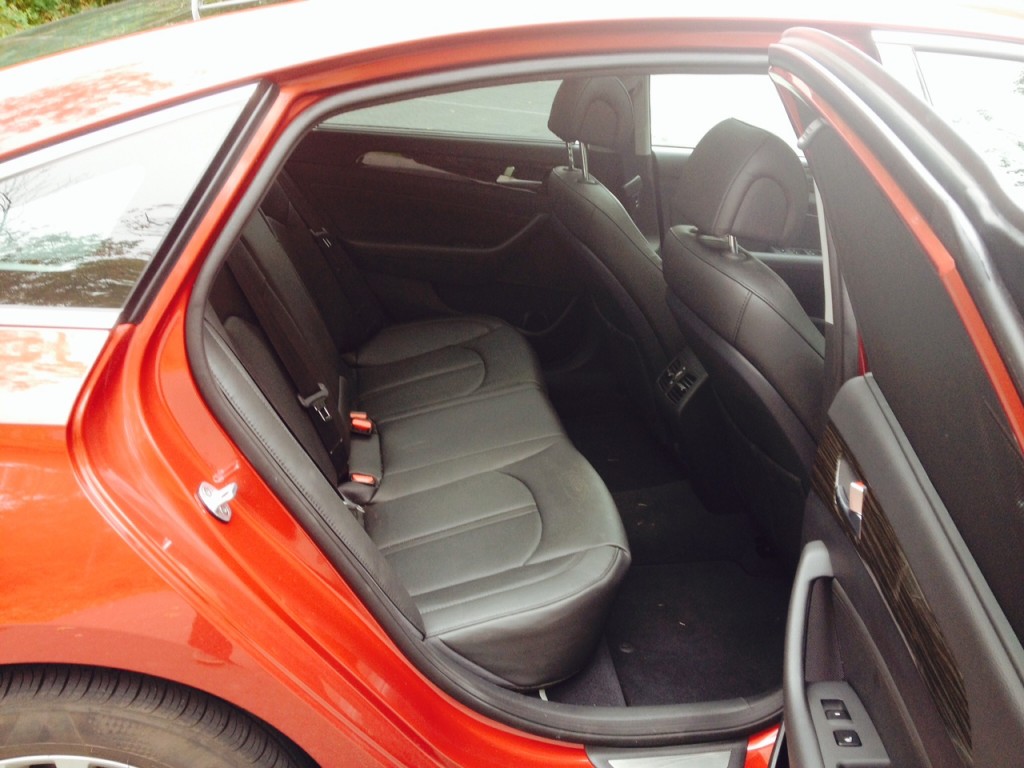 Space-wise, the Sonata won’t disappoint with plenty of leg, head and knee room throughout no matter which seat you are relegated to. However the driver’s seat was more on the firm side which negated any feeling of ‘luxury’, though they weren’t necessarily uncomfortable.

Trunk space is quite good although the opening is a little bit shallow. The seats can fold 60/40 for added space or you can use just the ski pass through in the middle. 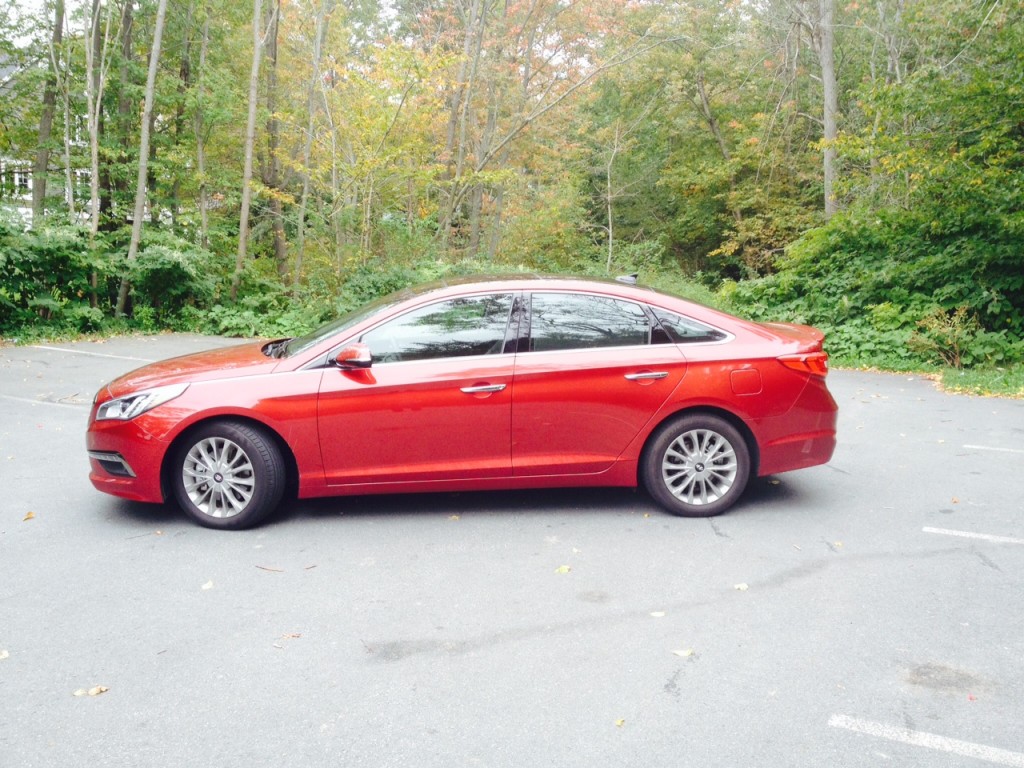 So let’s get to that engine. As mentioned it’s a 2.4 litre GDI (which stands for Gasoline Direct Injection) 4-cylinder which produces 185 horsepower and 175 pound foot torque. The end result is a capable engine that can get moving when you need it to, though it consistently feels like getting a teenager out of bed. You see, the six-speed automatic is geared towards fuel efficiency so it changes gear as quickly as possible to ruin your fun, but also to ensure you are smart with your gas money. In this case, the transmission is the parent of the teenager. There is an eco mode which stiffens up the throttle and makes the transmission even more sensitive to higher RPMs (revolutions per minute), and I think if someone really cared that much about fuel efficiency, they’d likely opt for the hybrid version (coming in 2015 as a 2016 model). 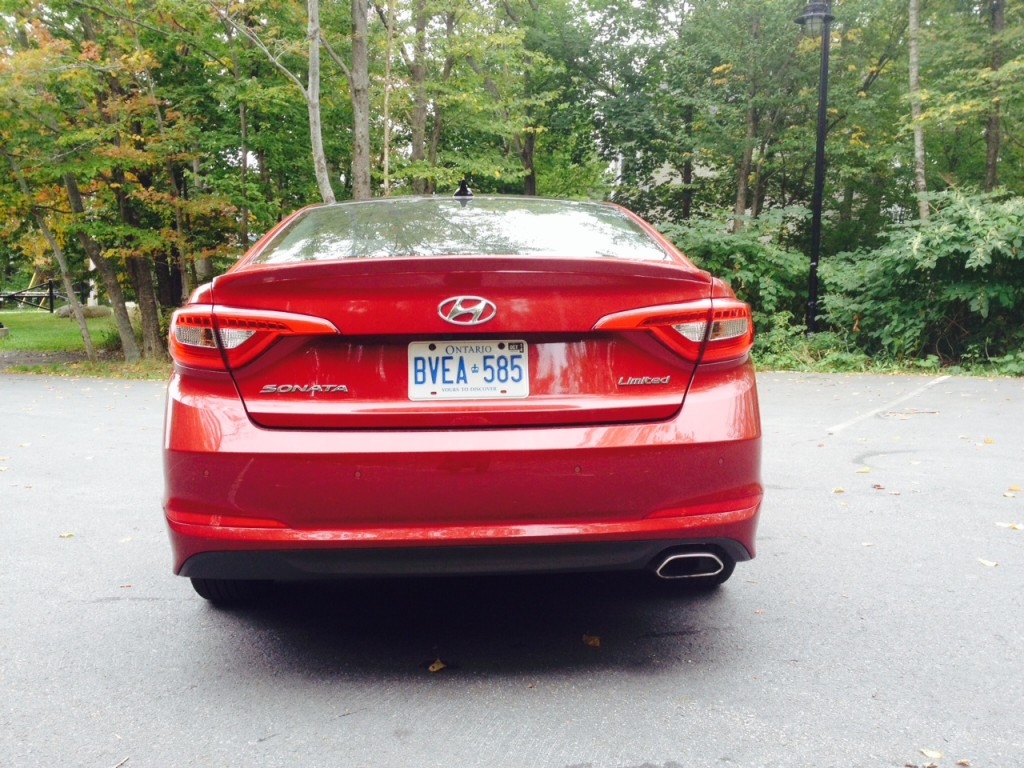 Once you do force the teenager to wake up, it provides adequate, if a bit buzzy, acceleration. This kind of power is good for most people, however the buzziness also ruins any ‘premium’ feel the Sonata Limited has.  The good news is once you achieve your desired speed, the teenager quietly goes back to sleep which makes for a more luxurious ride. 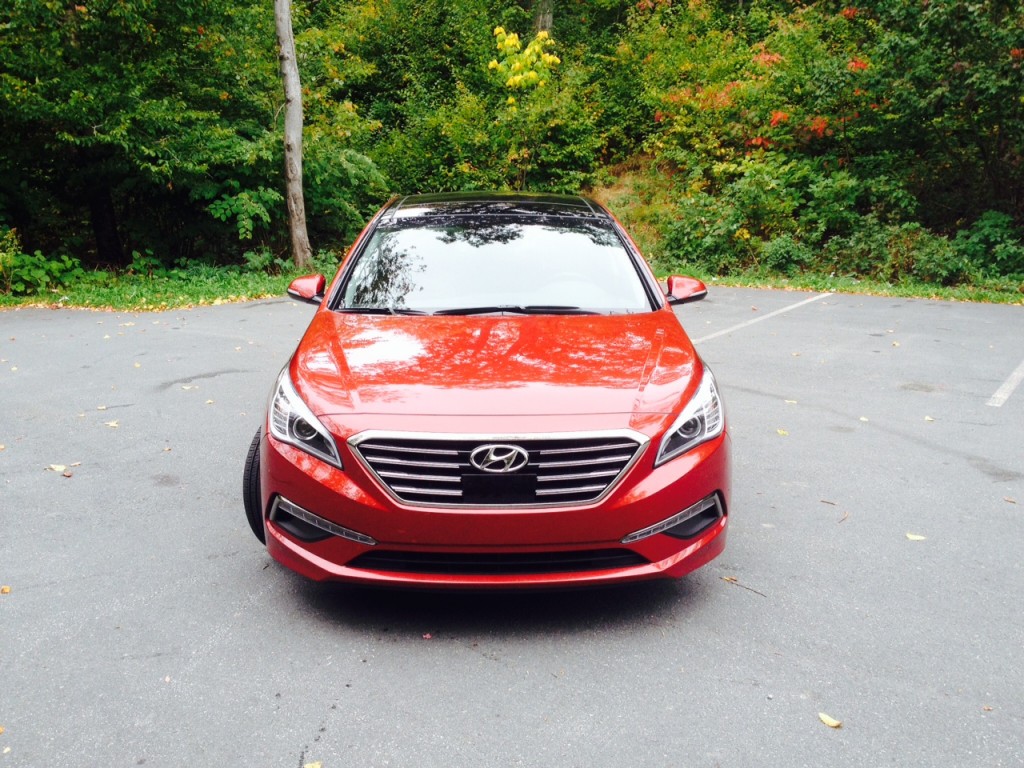 One thing I’ve constantly criticized new Hyundais for was the hallow feeling in the suspension as if it was made out of cardboard. I am happy to report that feeling is not present in the new Sonata. Ride quality is much improved, though you can still feel the imperfections in the road if you are traveling at a higher rate of speed. 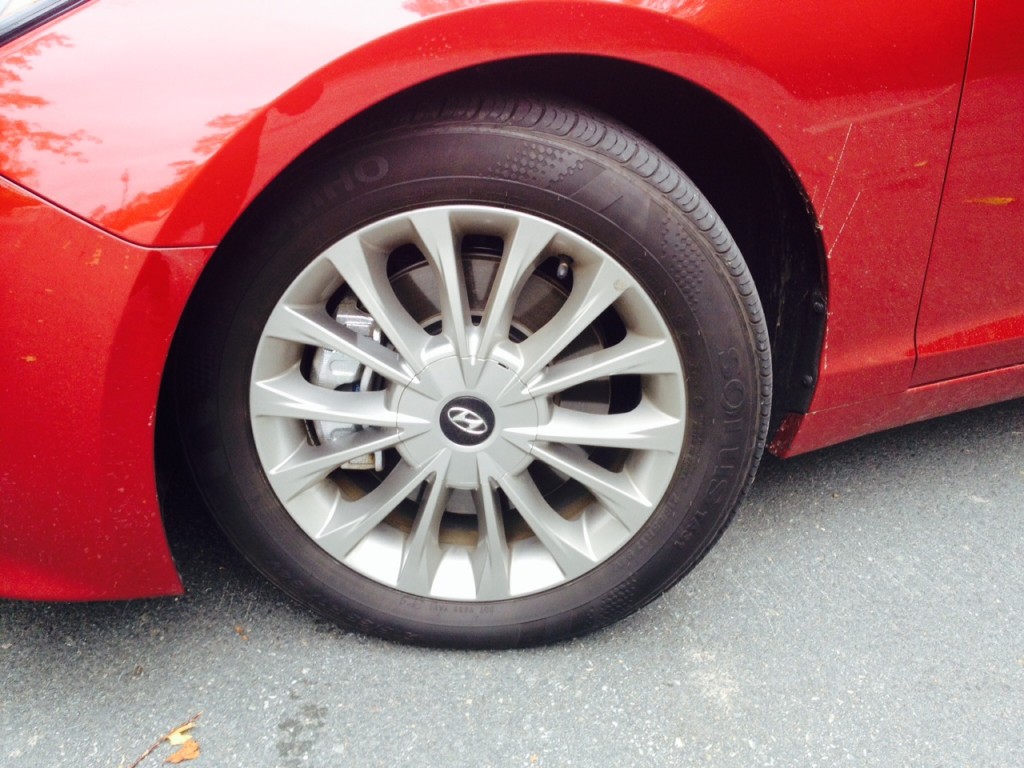 And speaking of a higher rate of speed, the Sonata it’s both a good news/bad news sort of thing for its highway performance. As mentioned, getting the full potential out of the engine is a bit of a challenge thanks to the automatic, so on ramps and passing vehicles makes the Sonata feel like it’s working a lot harder than it probably has to. On top of that, there isn’t the same solid feel you get from a Passat or an Accord. The car feels extremely light on its feet, almost as if a gust of wind could blow it off the road, which takes away a bit of peace of mind. You’ll quickly get that peace of mind back, however, once you use the adaptive cruise control – a system which will slow down or speed up the vehicle automatically based on traffic volumes. The Sonata will even bring itself to a complete halt if necessary. This is a good system that works wonders for long trips. There was never a point where the Sonata felt unsure if it should slow down or pick up, unlike other adaptive cruise control systems I have tried. 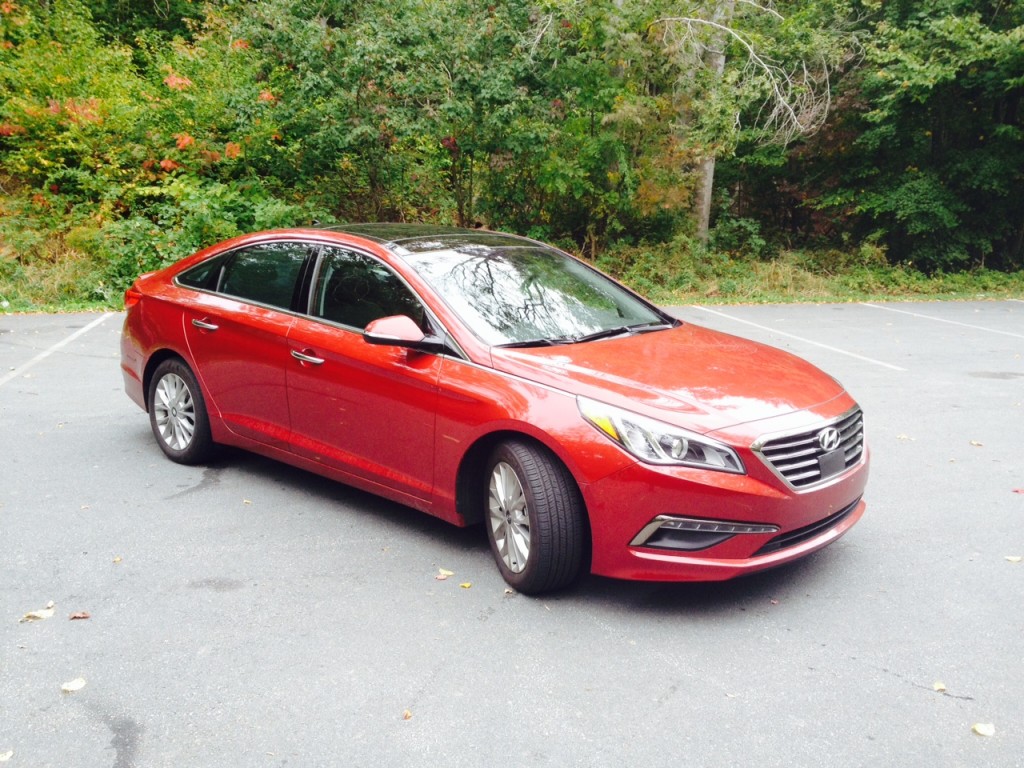 When the Sonata enters a bend, you’ll want to slow down because it is not set up for sharp handling at all. Those small-ish 17 inch wheels and a no sport tuned suspension makes for some body roll and under steer. If you’re looking for a more tossable Sonata, the 2.0T is your best bet. This Limited model prefers slow and steady. 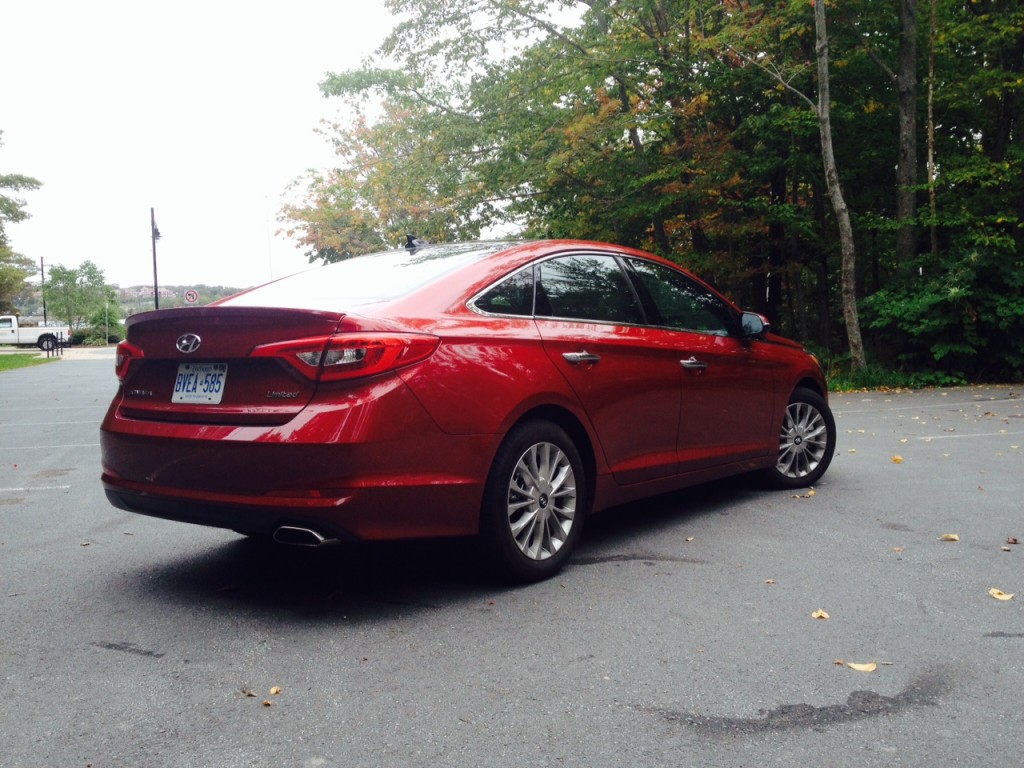 Fuel consumption-wise, the Sonata Limited is rated at 9.8 L/100 kms city and 6.7 L/ 100 kms highway with a combined rating of 8.4 L/100 kms. I was able to beat that with 8.0 L/100 kms combined. This is another big improvement. My experience with Hyundai press vehicles is that they get nowhere near their claimed efficiency numbers, so it was refreshing to beat those numbers in real world driving. And no, I didn’t employ any fuel efficient driving techniques at all, I drove it the way I normally would. I guess mamma transmission’s wish to keep engine power down does have its benefits. 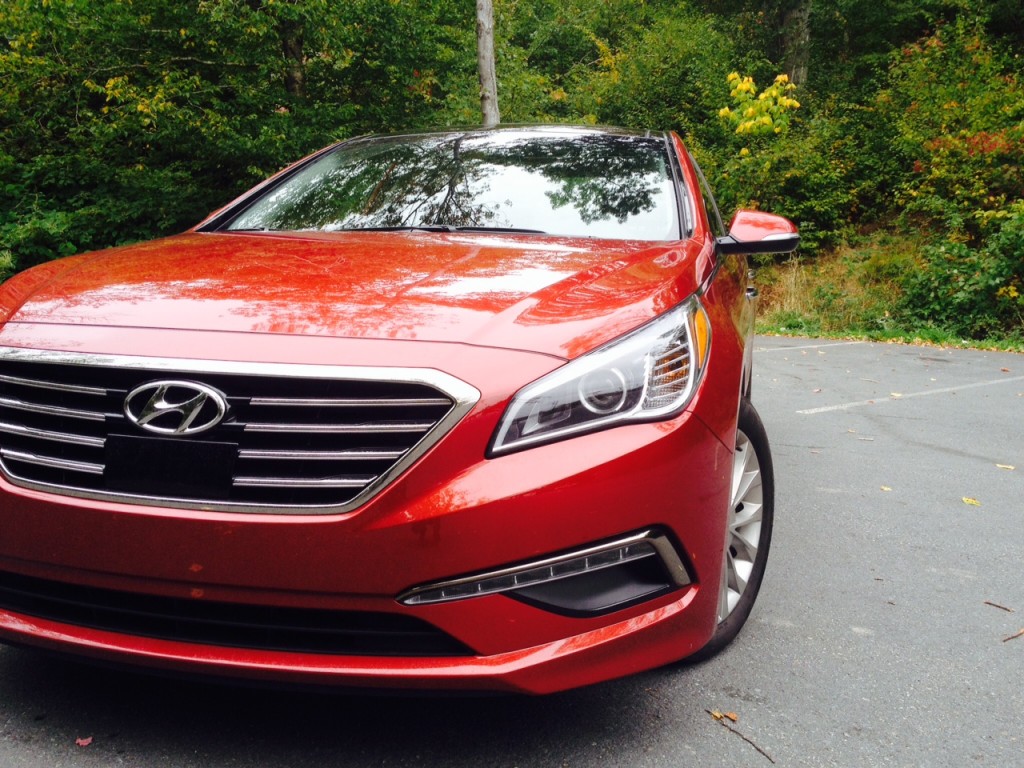 And indeed the Sonata as a whole has plenty of benefits. $34,000 is still a lot of money for most, however you get a lot of car for the money. Hyundai’s value mantra is still very much in tact. Plus, most likely won’t opt for the 2.4 engine in its luxury limited trim anyway. But the Limited’s very existence is a bit puzzling to me. For those who want comfort and luxury, they will be happy until they put their right foot down. Luxury, and prestige vehicles typically have more power available under the hood. I’m wondering if the 2.0T should be offered in the Limited trim. But regardless of the trim you choose, you’ll likely walk away feeling content. There is no doubt that the new Sonata, no matter which engine you choose, has a lot going for it.