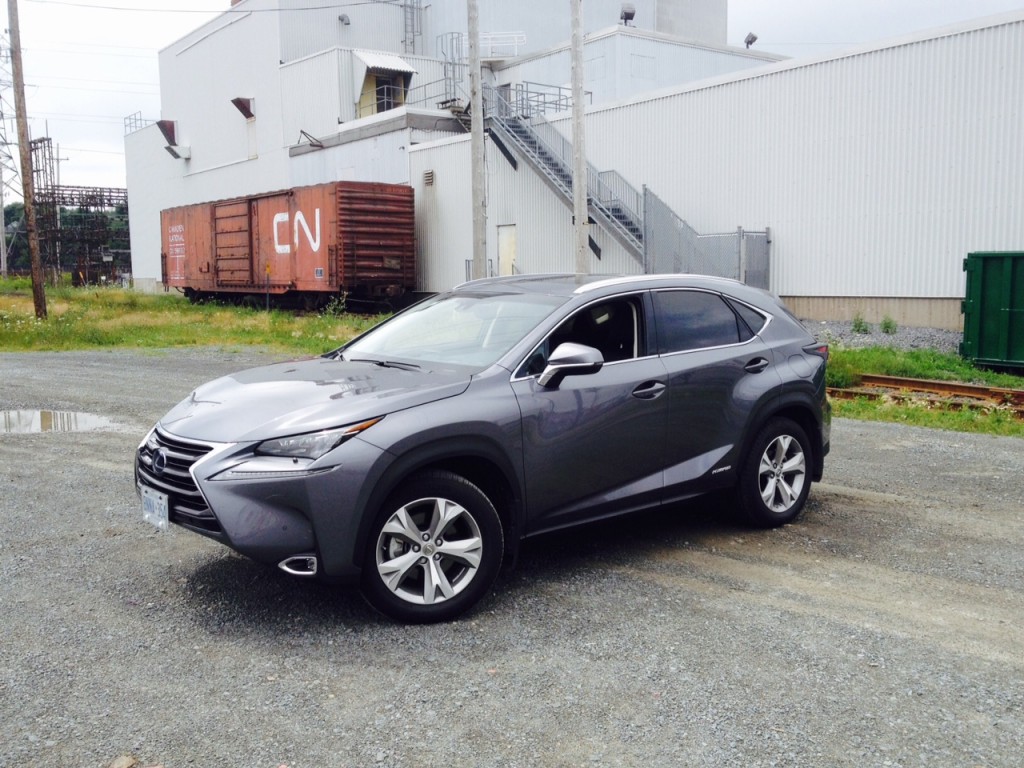 It could be said that Lexus is responsible for all the luxury badged SUV/CUV’s we see on the roads these days. Whether that’s a good thing or a bad thing is another issue altogether, but Lexus did take a bit of a gamble back in 1997 by introducing the very first RX, their first mid-size SUV and indeed their first ever SUV.

The gamble paid off. Not only did it help to catapult Lexus’ sales overall but rivals took notice and quickly developed a business plan to create their own.

So it’s curious then that Lexus has waited so long to capitalize on the new and latest hot market trend: the compact luxury SUV. Were they taking their time to make sure they got it just right, or did they take another gamble in assuming the compact SUV market wouldn’t take off?

Whatever the reason, Lexus is definitely very late to the party and not fashionably late. Audi, Acura, BMW, Mercedes-Benz, Infiniti and Volvo have been all duking it out in the segment for a while, in some cases, over a decade now. Even Porsche of all brands has beat Lexus to the punch. 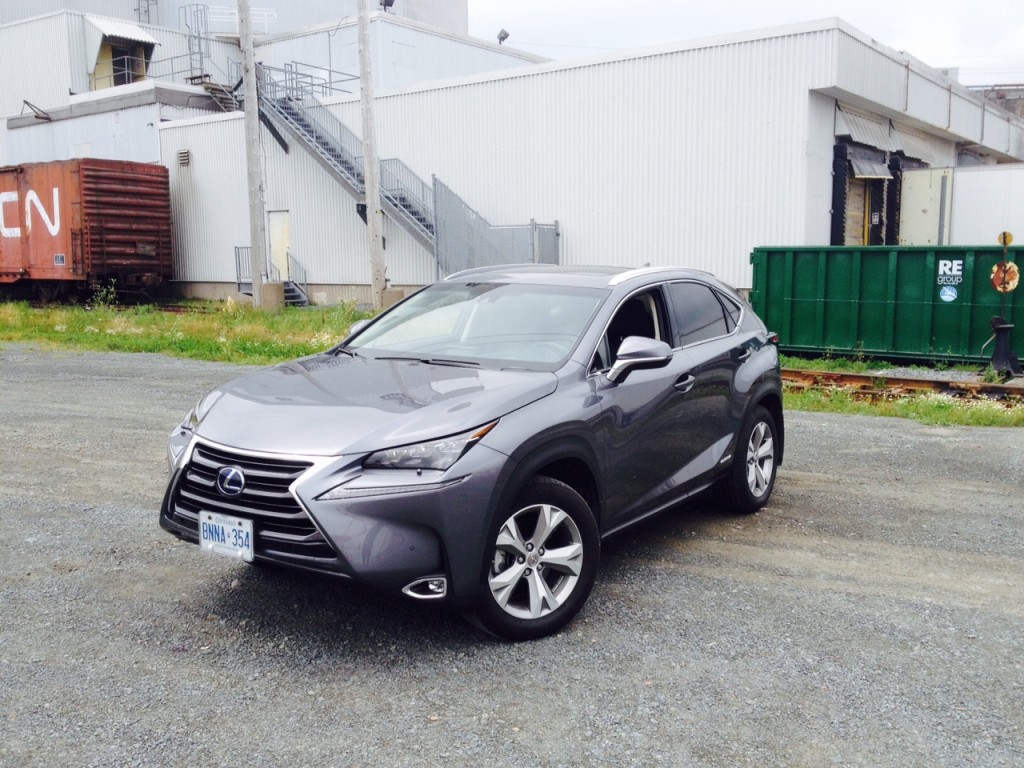 No matter, the NX is here now and it comes in two flavours: the NX 200t and the NX 300h. Luckily for Lexus, their nomenclature makes it easy to figure out what’s under the hood. The ‘t’ stands for turbo and the ‘h’ stands for hybrid. The NX 200t is Lexus’ first ever venture in engine turbocharging, but they sent our tester in NX 300h form which is the most expensive of the two, but also likely the most familiar. Lexus offers the most hybrid options of any luxury maker, so the NX 300h should be an automatic home run, no? I drove one for a week to find out. 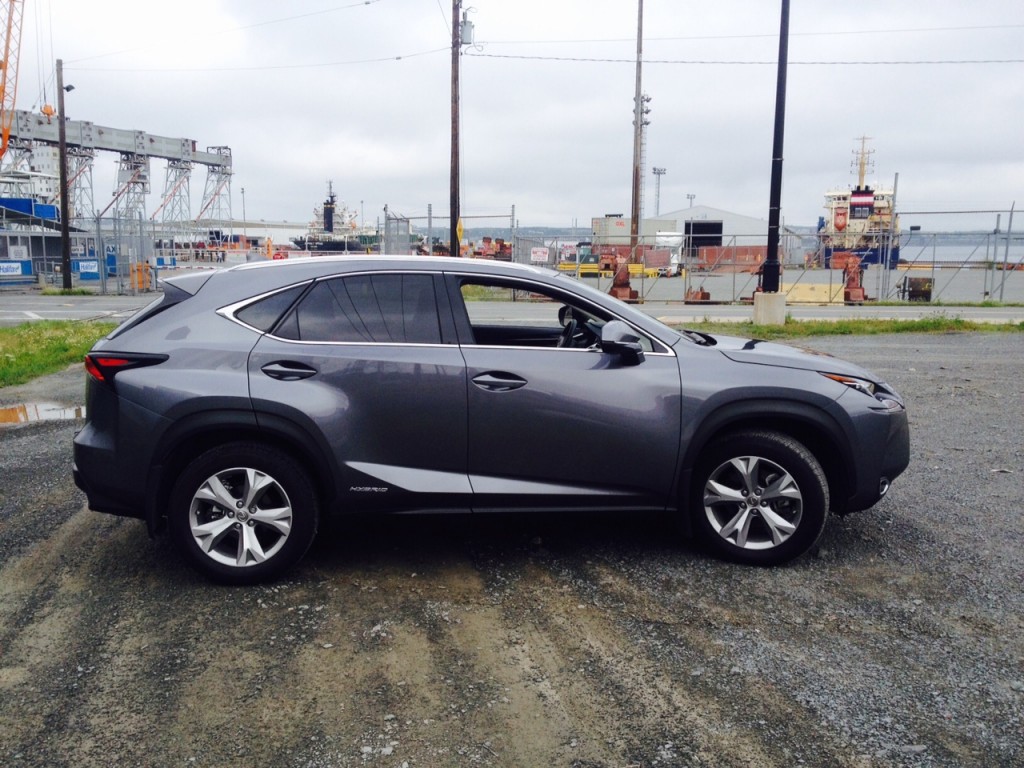 Even though Lexus is late to the party, it does give them a slight advantage in the design department as they could come up with a design that looked nothing like the competition. And indeed, there isn’t really anything on the road today that looks like the NX. It’s sharp, almost pointy nose matched with the still controversial spindle grille. The shapely design continues with large bulges over the wheel wells and finished off it the back with literally sharp looking tail lights. Seriously, they look like they could cut you. I remain undecided on the design overall, but one thing you can’t call the NX is boring. 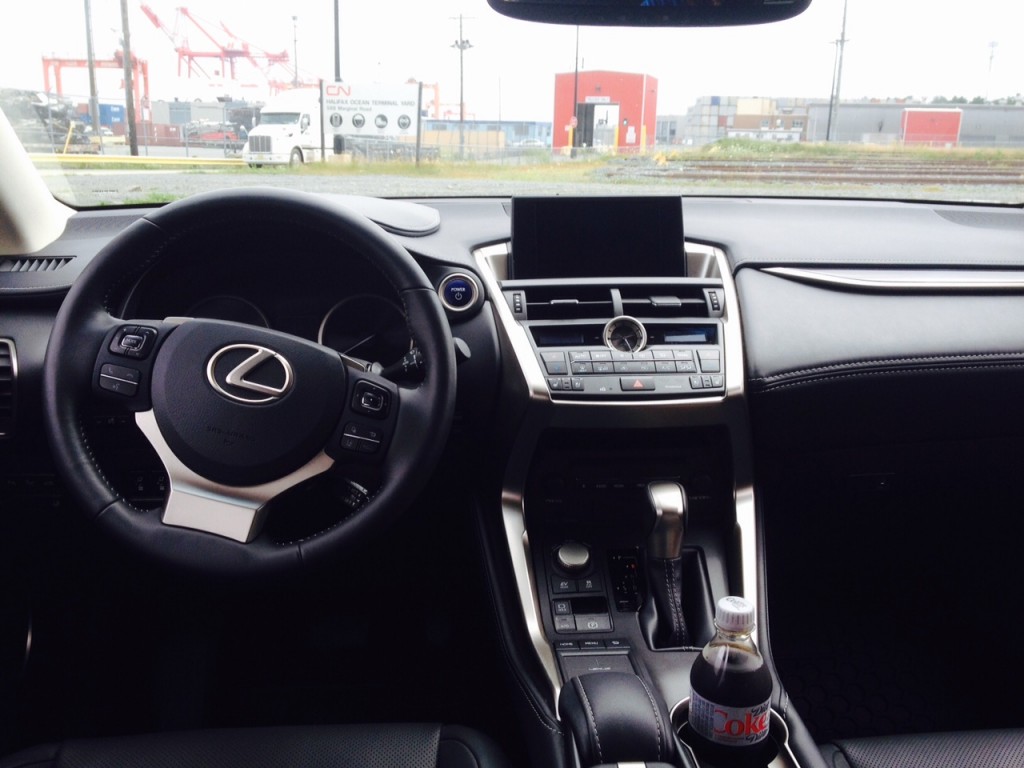 Inside, Lexus has opted to go for a more sporty design as opposed to luxury. There’s no wood trim to be found, instead you’ll find brushed aluminum accents. The centre stack mimics the spindle grille up front which is a clever touch, but the infotainment screen is attached at the very top making it seem a bit too far away from the driver. It is operated by a track pad, not unlike the one found on your laptop. It isn’t the most intuitive method, and it forces the driver to spend more time tracking the ‘cursor’ rather than just using a touch screen. However, it does respond to commands quite well. 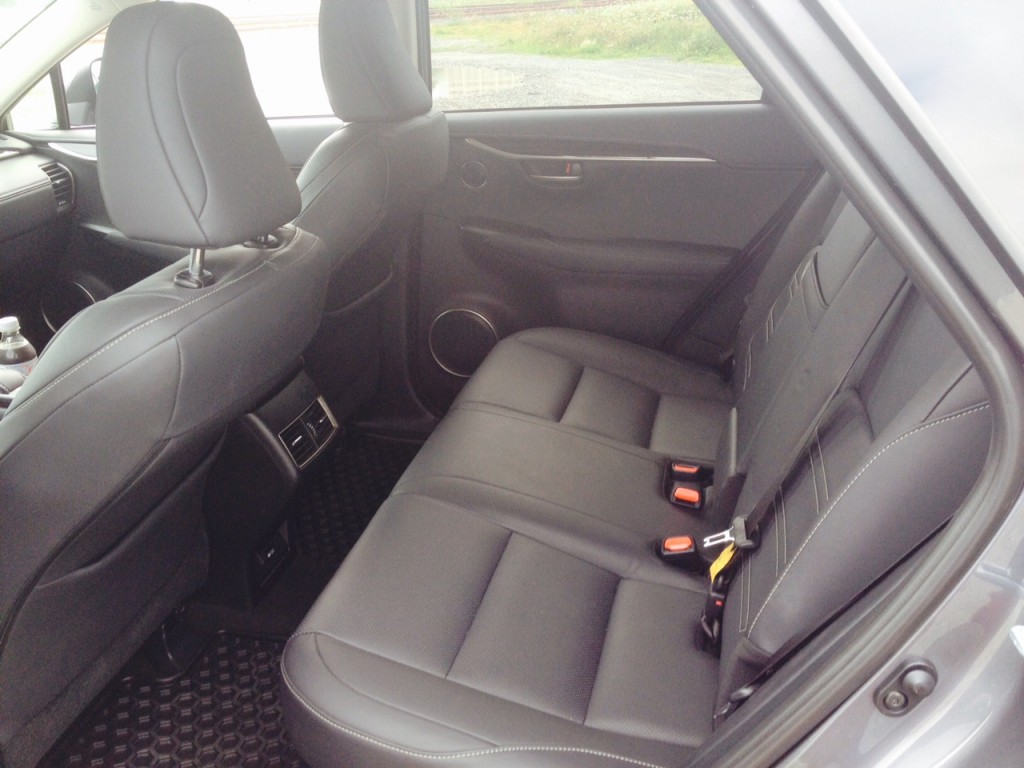 An odd, and class exclusive feature (perhaps even a first in any production vehicle) is a small detachable mirror found behind the track pad. Considering there are two mirrors behind the sunshade in addition to the rear view and side mirrors, I’m not sure how necessary this is, though maybe Lexus’ own internal research shows there may be potential customers who just can’t get enough mirrors…? 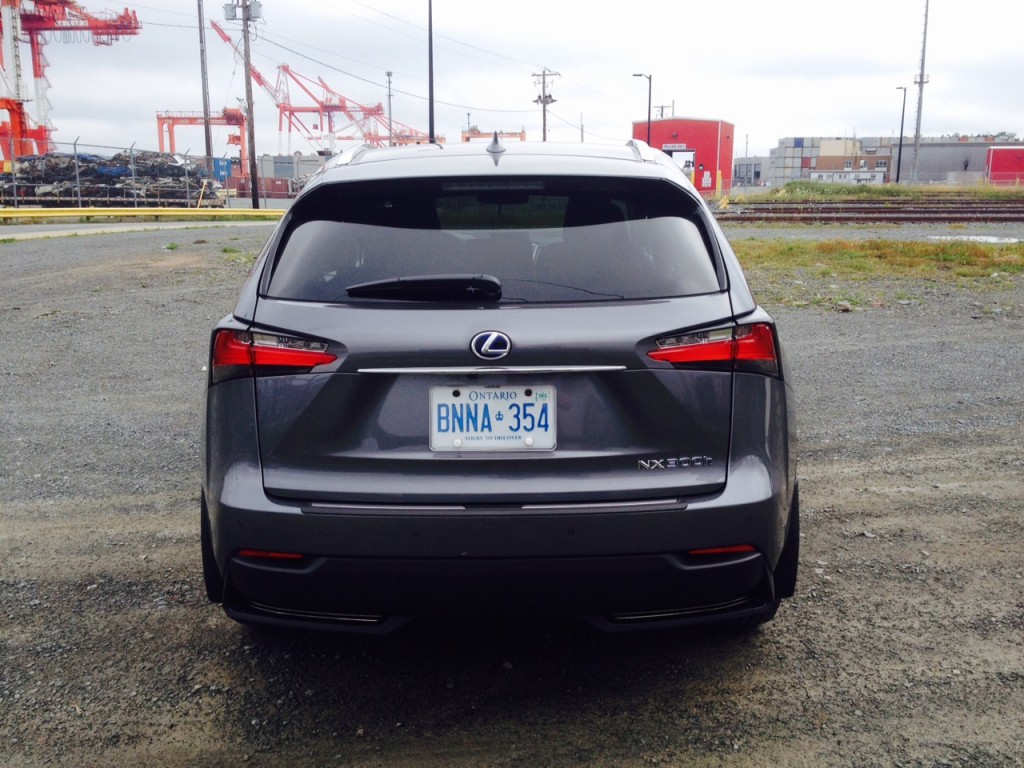 Interior room overall is good with rear passengers getting above adequate head, leg and knee room. The seats in both rows are decidedly comfortable. Cargo room is decent as well, even if it is a tad on the narrow side. The seats do fold 60/40 providing much more room if needed. 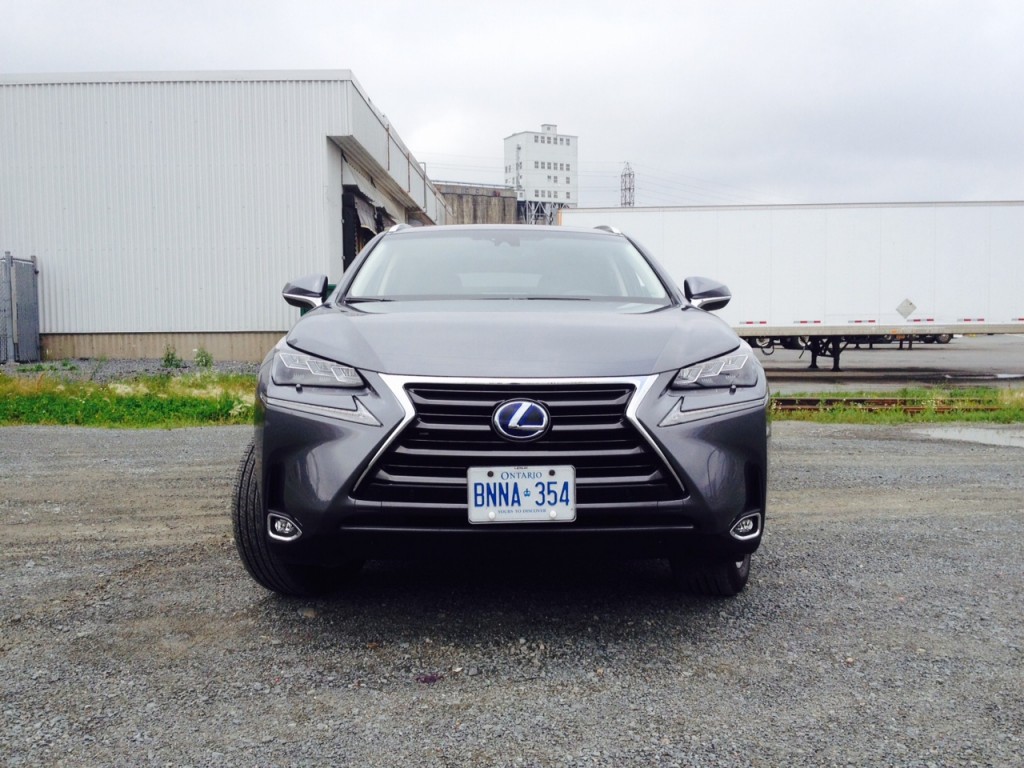 As mentioned, the NX in 300h guise means you’ll get yourself a hybrid power train which is a 2.5 litre 4-cylinder which produces 154 horsepower and 152 pound feet of torque mated to a continuously variable transmission. The electric motor bumps the horsepower figure up to a more respectable 194. The end result largely depends on which driving mode you’re in. In normal mode, the NX doesn’t feel particularly fast or slow, it feels, well, normal. In eco mode there is an obvious push back when you go anywhere near the throttle, which is to be expected, but it also makes the NX quite sluggish off the line. In sport mode, the NX feels more lively. The bottom line is the NX can feel adequate when need be, but if true performance is what you’re after, you’re better off taking a look at the faster and cheaper NX 200t. 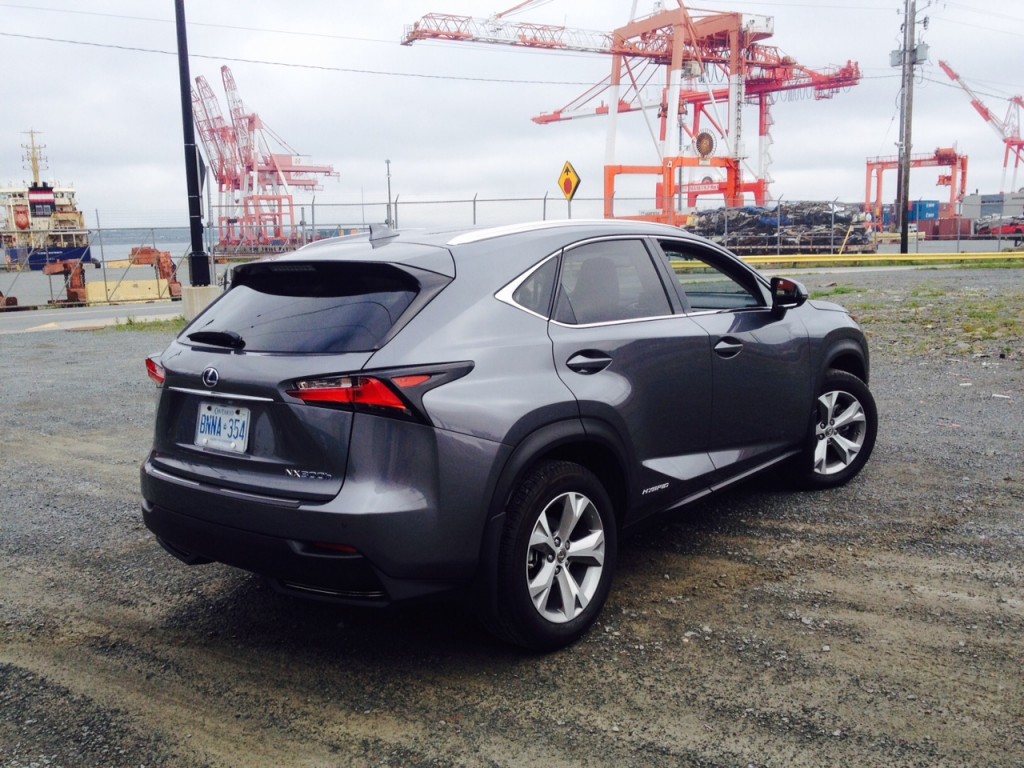 In terms of handling, it feels more nimble than big brother RX, but as with most SUVs/CUVs you need to expect that this will never really be a forte. One thing that is surprising is the weightedness of of the steering, even in normal mode. While it doesn’t necessarily translate into a direct feel, it does give a bit more confidence and control while cornering as opposed to the typical numbness you find in the steering of most hybrids. 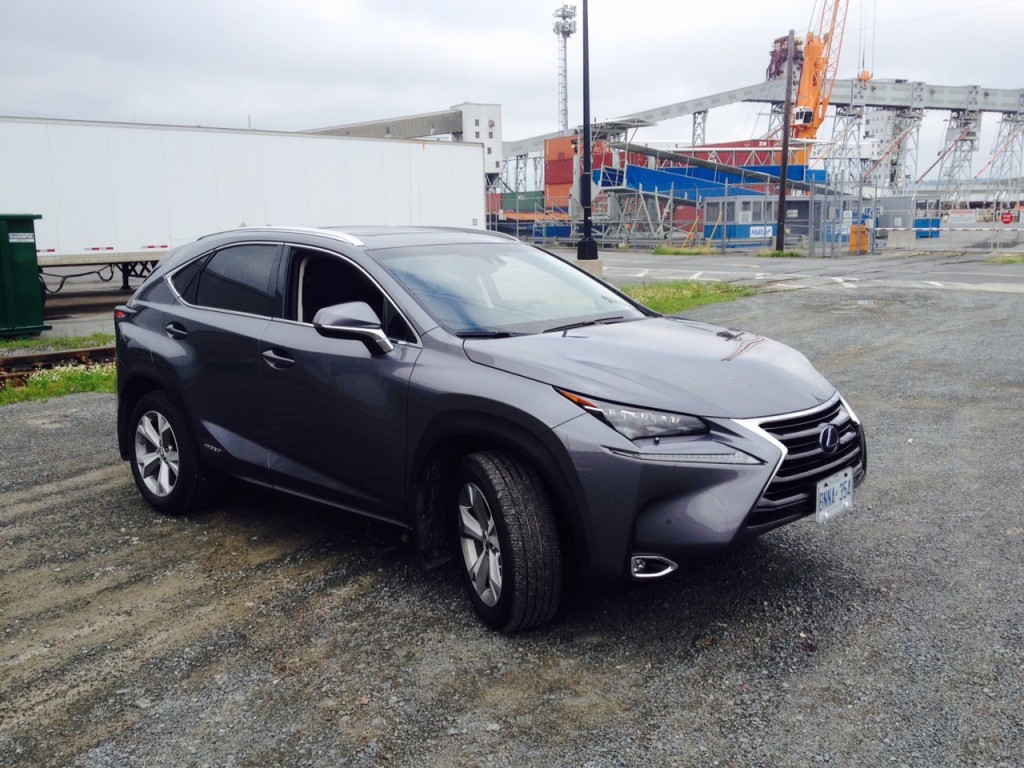 So, if the NX300h isn’t particularly fast and isn’t particularly note worthy in the corner, then its party piece should be fuel efficiency, right? Well, that’s a bit of an understatement. During my week of mostly city driving it returned a stunning 7.3 L/100 kms in real world driving. To put that into perspective, that’s just a bit more gas than a Corolla consumes. Considering the NX300h’s heft of 4,100 pounds, that is truly impressive and also speaks to how Toyota/Lexus has perfected its hybrid technology over time. 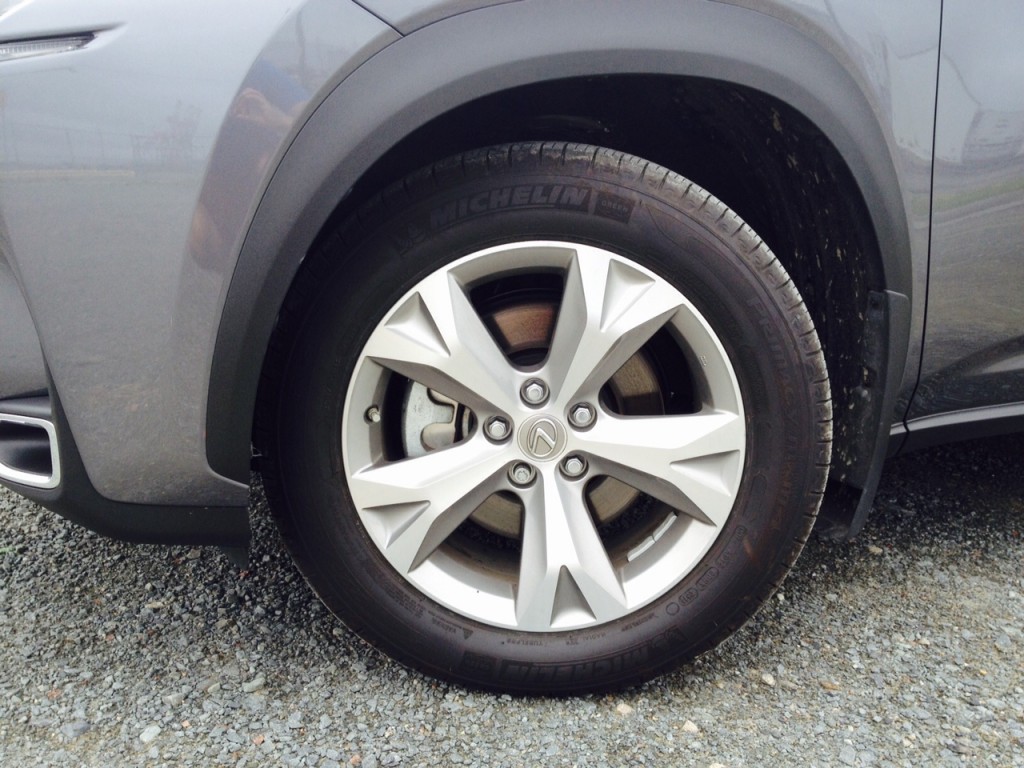 And here’s the downside. The price as tested is over $61,000. And to put that into perspective, you could buy four Toyota Corollas for that price. Ah, but it’s a Lexus and a price premium should be expected, you say? Perhaps, but even the turbocharged NX 200t is way cheaper than the hybrid. It starts at $41,000. And even though it takes a fuel consumption penalty being rated at 10.6 L/100 kms city, saving $20,000 from the onset will definitely offset any gas savings from the hybrid. On top of that, the NX 200t can be had in F-Sport guise which not only makes it look better appearance-wise, but it also offers up a more lively and enjoyable driving experience. So there we have it. Lexus’ first fray into the compact SUV segment is largely a success when it comes to style, interior space, and fuel consumption but it does not represent anything close to value and performance. It all boils down to what matters most to you and how much you are willing to pay for it. And don’t forget, there are plenty of established players in the segment that have been at this for a while, making it more likely to find a deal. 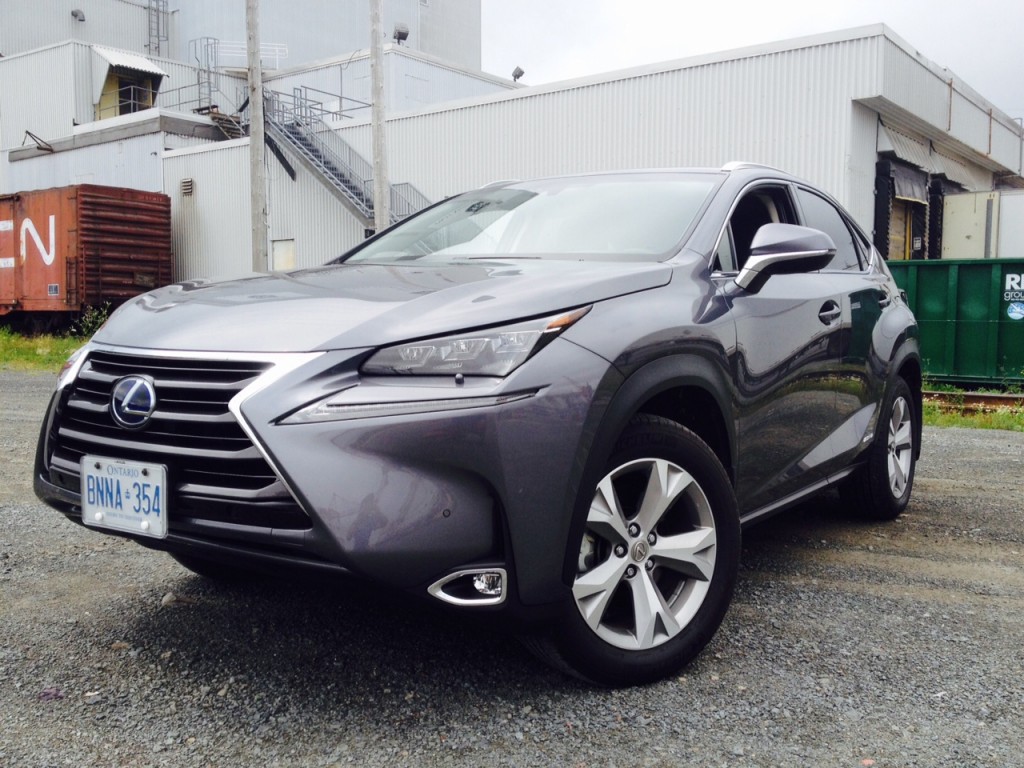